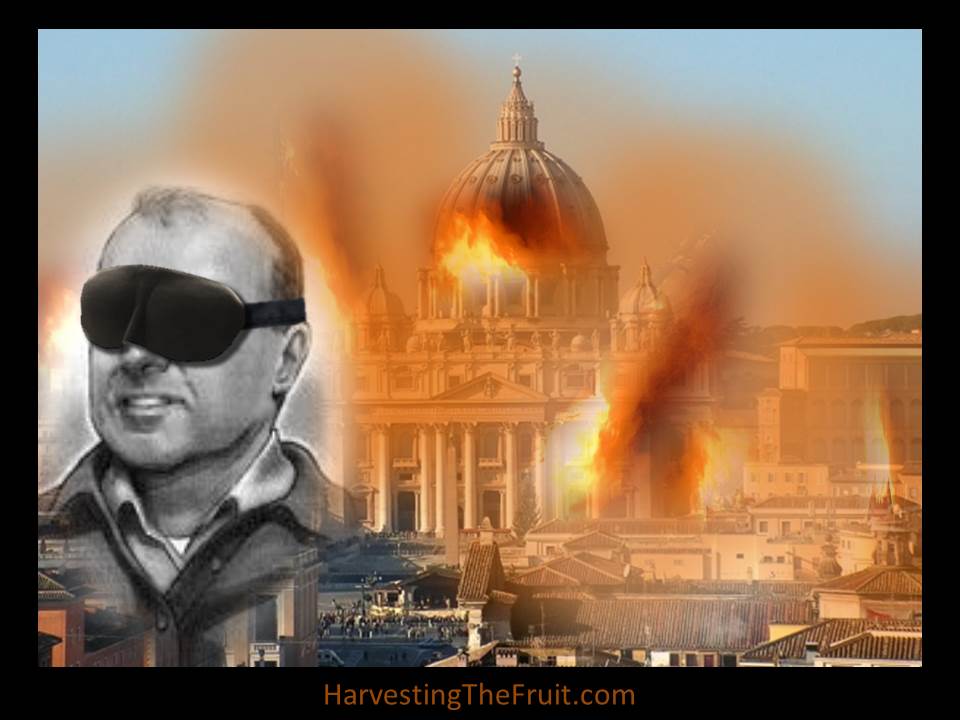 In a recent article at CatholicCulture.org, Phil Lawler highlights a review of Cardinal Walter Kasper’s, Mercy: The Essence of the Gospel and the Key to Christian Life, a book that Pope Francis has publicly praised.

According to the book’s reviewer, the contents are entirely consonant with the Faith.

Now, I wouldn’t suggest reading Kasper’s book either way, but the article itself is a gem if for no other reason than the way Lawler once again demonstrates just how content some folks are to hide behind a “conservative” Catholic blindfold in order to deny that the House of God is ablaze at the hands of clerical arsonists.

“Kasper’s proposal,” of course, is a reference to the German cardinal’s presentation given at the Consistory of Cardinals in Rome in February during which he proposed the possibility of inviting the civilly divorced and remarried to Holy Communion, apart from a decree of nullity of a still valid marriage and without a vow of continence going forward.

Everyone with eyes to see knows perfectly well what Pope Francis thinks of it.

On May 6th, Lawler pushed what appears to be the outer limits of his comfort zone when he said, “It’s incontrovertible that the Pope has encouraged discussion of the Kasper proposal.”

It is to laugh! Pope Francis did a hell of a lot more than simply “encourage discussion.”

After giving Kasper’s proposal a close rereading, the Holy Father offered his assessment to the Cardinals gathered in Consistory the following day, calling it an example of “profound and serene theology … a pleasure … theology done on one’s knees.”

This wasn’t merely an attaboy for an old friend, nor was it simply approval of the lively debate that ensued following Kasper’s presentation; it was effusive praise for the proposal itself.

Apparently, Lawler and his neighbors out in La La Land didn’t get that memo. On May 6th he wrote:

Some critics of Pope Francis (and some critics of yours truly) seem to think that it’s only a matter of time before Pope Francis endorses the Kasper proposal, and gives the green light for Catholics who are divorced and remarried to receive Communion.

To be clear, Lawler is actually addressing two separate matters.

On the one hand, the pope has not, and perhaps may not, give the “green light” mentioned.

On the other hand, Pope Francis has already offered what every reasonable observer recognizes as a glowing endorsement of the “Kasper proposal,” and you can be certain that the bishops of the world are well aware of it. You can also be reasonably certain that many of them are under considerable pressure, at the hands of those who agree with the pope, to open their own minds to it as well.

Pope Francis has also provided other, slightly more subtle, signs as to his thinking on the matter of civilly divorced and remarried Catholics.

For example, in his March 5th interview with the Italian daily, Corriere della Sera he said:

Orthodox theology is very rich. And I believe that they have great theologians at this moment. Their vision of the Church and of synodality is marvelous.

Furthermore, in his 50,000 word tome that Cardinal Burke still hasn’t quite figured out in his mind exactly how to describe, the Holy Father stated:

If we really believe in the abundantly free working of the Holy Spirit, we can learn so much from one another! It is not just about being better informed about others, but rather about reaping what the Spirit has sown in them, which is also meant to be a gift for us. To give but one example, in the dialogue with our Orthodox brothers and sisters, we Catholics have the opportunity to learn more about the meaning of episcopal collegiality and their experience of synodality. Through an exchange of gifts, the Spirit can lead us ever more fully into truth and goodness. (Evangelii Gaudium)

Taken with his over-the-top assessment of Cardinal Kasper’s blueprint for subverting the Church’s venerable practice relative to Holy Communion for recalcitrant adulterers, the math isn’t very difficult to do in this case.

One can well imagine the Holy Father, in addition to leaving the matter open to the various national episcopal conferences, generating a Post-Synodal Apostolic Exhortation that may very well include positive support for something similar to the schismatic Orthodox approach to marriage; one that allows what amounts to a couple of marital mulligans.

For those unaware, the Orthodox, not unlike Cardinal Kasper, speak out of both sides of their mouths on this topic:

While tolerating a second marriage and in certain cases a third, the Church completely forbids a fourth marital union…

The Church does not allow divorce any more than she allows sin; she does not permit something which the Lord Himself has specifically condemned…

The Church can and does practice mercy and forgiveness, and sympathizes with couples who must consider the grave alternative of divorce in order to salvage their lives from the tragic circumstances of a broken marriage. In such painful situations the Church offers the opportunity for repentance and forgiveness and the possibility for a new beginning, with final judgment resting in the hands of the Lord…

This is precisely the sort of duplicitous blather that one should expect from a “synodal” church comprised of schismatics who presume to operate apart from the Successors of St. Peter, but there’s also ample reason to believe that we may very well see a similar brand of nonsense adopted in various parts of the Catholic Church under a Successor who finds their ecclesiology simply “marvelous.”

Unless, of course, one prefers to simply hind behind a conservative Catholic blindfold.