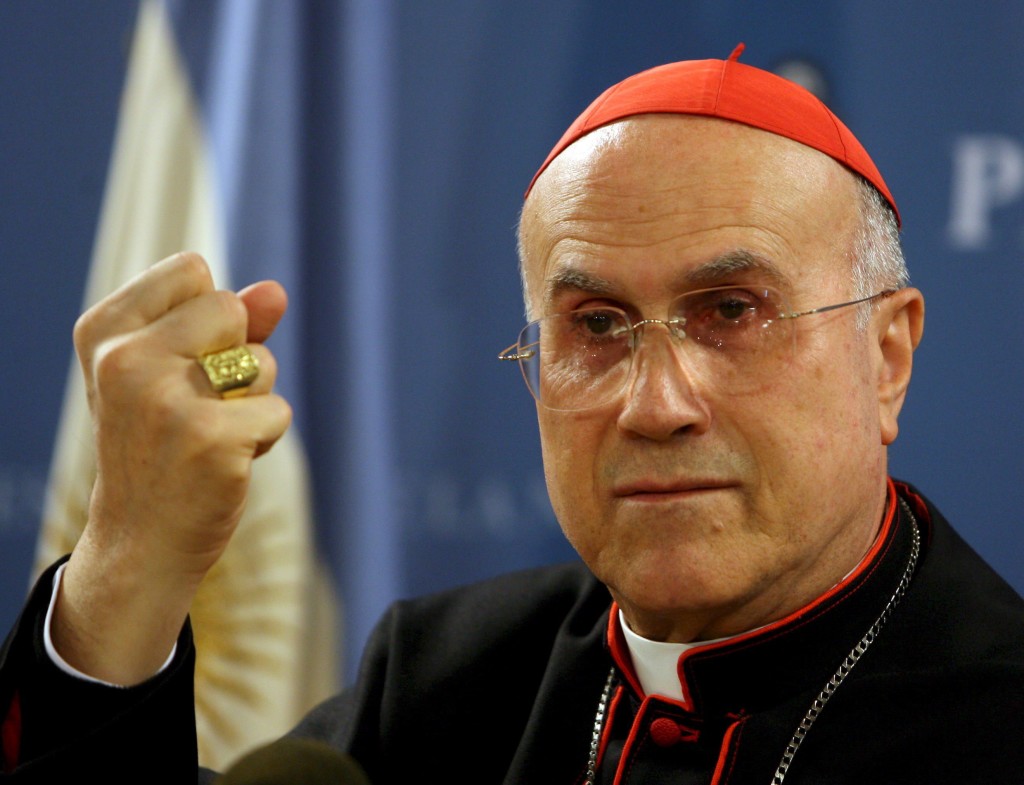 With the alleged publication of the Third Secret of Fatima in the year 2000, the Vatican embarked on a magnificent campaign of deception that was designed to bury Our Lady’s warnings once and for all.

Part and parcel of that effort was an attempt to discredit, and ultimately silence, men like Fr. Nicholas Gruner, who tirelessly called for the consecration of Russia to the Immaculate Heart of Mary according to Our Lord’s wishes; thus opening the floodgates of grace that would effect that nation’s conversion and usher in the unprecedented period of peace that Our Lady had promised.

Among those deeply involved in the cover-up operation, both at the time and right up to the present day, was one Archbishop (now Cardinal) Tarcisio Bertone, who as Secretary of the Congregation for the Doctrine of the Faith wrote the introduction to the CDF’s publication of the Third Secret.

Presenting what currently stands as the official Vatican position, Bertone insisted that the consecration of the world to the “Mother of all men” as made by Pope John Paul II some sixteen years earlier had fulfilled Our Lady’s request.

In support of this claim, Bertone cited a letter allegedly written by Sr. Lucia on 8 November 1989, wherein she supposedly stated:

Fr. Gruner often referred to this alleged correspondence from the hand of the Fatima seer as a “fake letter,” and those associated with the Fatima Center weren’t the only persons to dismiss it as such.

In the aftermath of the CDF’s efforts, well-known secular Italian journalist Antonio Socci set out to investigate the matter.

He was determined to produce evidence that would show beyond any reasonable doubt that the Vatican had revealed the whole truth and nothing but the truth, and that men like Fr. Nicholas Gruner are nothing more than conspiracy theorists and crackpots.

Much to Socci’s astonishment, however, he came to discover the exact opposite; including the fact that the consecration was not done and that the letter cited by Bertone is just as Fr. Gruner insisted; a fake.

So intent was Cardinal Bertone to defend himself and the “company line” that he had towed so faithfully over the years that he wrote a book of his own seeking to embarrass Socci and to refute his conclusions.

Writing for the Fatima Center, Christopher Ferrara provided an overview of the feud in an article entitled, “Civil War Rages in Rome Over Third Secret of Fatima.”

Another self-inflicted wound is Bertone’s statement that “Sister Lucy never worked with a computer.” Here Bertone forgets that, when it was expedient for him to do so, he asserted precisely the opposite: that Sister Lucy “even used a computer” in 1989 — a claim that, as Socci notes, “served to accredit certain letters that Sister Lucy had not written in her own hand and which contradicted everything she had said before on the consecration of Russia.” Bertone has thus undermined all claims that Sister Lucy was the author of those letters.

I would encourage even the most well-informed readers to visit the Fatima Center website to read Mr. Ferrara’s article in its fullness, as the arguments presented therein are as relevant today as ever.

Readers might also consider encouraging those innocent seekers who as yet do not know the full truth about Fatima to do likewise.

You see, those who might venture further into the Fatima Center’s website in order to read Mr. Ferrara’s most recent articles (and why wouldn’t they?) are likely to come away terribly confused.

They may even come to the conclusion that the Vatican’s official position on Fatima as defended by Cardinal Bertone is entirely correct, and that Sr. Lucia really did author that 1989 letter declaring that the consecration of Russia “has been done just as Our Lady asked on 25 March 1984.”

Clearly, if this be so, then the blood, sweat and tears shed by Fr. Nicholas Gruner over the course of several decades were all for naught, and the Fatima Center itself, his legacy, is little more than a stale joke.

One may rightly ask:

How can one be so misled simply by reading the content posted on the Fatima Center’s very own website?

The unfortunate answer is that, in spite of any good intentions on the part of individual people, the Fatima Center has lost its way.

Rather than remaining steadfast in the mission of defending the message of Fatima from compromise and corruption, the new Fatima Center has chosen to engage in “spin” (not my word); accentuating what may seem to be the “positive” or true while deliberately overlooking that which is clearly “negative” or false.

One, the painting of Ronald Reagan as a disciple of Fatima who supposedly learned of the apparition at the knee of Pope John Paul II – the man who singlehandedly bears more responsibility than any other for the cover-up under discussion here.

Secondly, the uncritical praise being heaped upon Cardinal Raymond Burke in spite of his rather bold attempts to wed the message of Fatima to the Second Vatican Council, the New Evangelization, and the aforementioned propagandizing pope. 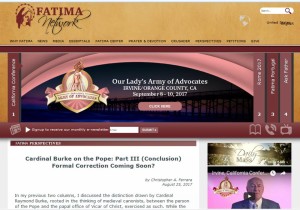 A visitor to the new Fatima Center’s homepage will find no less than two articles dedicated to the latter, the most recent being the last in a three part series that labors to defend Cardinal Burke’s nonsensical claim that a pope cannot teach error; as if to equate “teaching” with “binding.” (A position that I refuted HERE.)

This particular article aptly demonstrates what happens when one casts their lot with a man (in this case, Cardinal Burke) as opposed to applauding truth for its own sake, while also condemning error regardless of who the agent may happen to be.

In other words, Cardinal Burke has apparently been anointed the new Fatima Center’s “Cardinal Prince,” and as such, he must be defended; even if that means overlooking his most egregious errors and offenses against Our Lady.

In any case, the article ends with the following:

Clearly, the Cardinal knows he has a duty to the Church and to souls to make the promised public correction. Let us hope and pray that he does his duty to confront a situation he himself has so rightly linked to the failure to consecrate Russia to the Immaculate Heart of Mary.

“Linked” in this case provides readers with one-click access to a LifeSite News article applauding Cardinal Burke’s  speech at the Roman Life Forum calling for a “renewed” consecration of Russia. 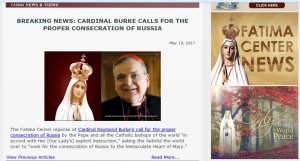 This is the same speech that the new Fatima Center hails as “a very happy development” in its other homepage article. Elsewhere on the website, Mr. Ferrara, with this same speech in mind, applauds Cardinal Burke for his “courageous declarations” and his “intellectual honesty.”

Again, all of this in spite of Burke’s bold attempts to wed the message of Fatima to the Second Vatican Council, the New Evangelization, and Pope John Paul II.

(I might also remind readers that this is the same speech that the Remnant heralded as a “total vindication” of Fr. Gruner.)

If this isn’t problematic enough, the Cardinal Prince of the new Fatima Center was recently asked about his call for a “renewed” consecration of Russia in an interview with the Wanderer.

According to Documents on Fátima (from the Fatima Family Apostolate), Sr. Lucia wrote on August 29, 1989 [sic] that Pope St. John Paul II’s consecration of the world to the Immaculate Heart of Mary on March 25, 1984 fulfilled Our Lady’s request. At the Rome Life Forum about three months ago, you urged the Catholic faithful to “work for the consecration of Russia to the Immaculate Heart of Mary.” What does the consecration you are calling for entail; is it more than the Pope simply naming Russia explicitly?

To which Cardinal Burke stressed, in part, that he is “in no way denying John Paul’s intention to include Russia when he consecrated the world to her Immaculate Heart.”

He then went a step further, adamantly declaring:

To repeat, the consecration I called for is in no way to call into question what Sr. Lucia said about St. John Paul II fulfilling what Our Lady asked for. It is simply to respond to that request one more time and consecrate Russia in an explicit way. At the same time, it is the right and duty of the faithful to ask Pope Francis to do this consecration.

The Cardinal Prince of the new Fatima Center has placed himself shoulder-to-shoulder with Cardinal Tarcisio Bertone; stating in no uncertain terms that the consecration of Russia “has been done just as Our Lady asked, on 25 March 1984” such as it was allegedly confirmed by Sr. Lucia in a letter that Fr. Gruner and the old Fatima Center vehemently rejected as “fake.”

In so doing, Cardinal Burke is making of Our Lady a liar as Russia clearly remains unconverted, and the polar opposite of peace is reigning throughout not only the world but the Church herself.

His Eminence made the comments under review here in an interview published three weeks ago today, and still, all indications are that he remains the Cardinal Prince of the new Fatima Center.

Had Cardinal Burke made this claim at any time prior to the passing of Fr. Nicholas Gruner, can there be any doubt that the Fatima Center (likely via the pen of Mr. Ferrara) would have swiftly called him to account for this terrible affront to Our Blessed Lady?