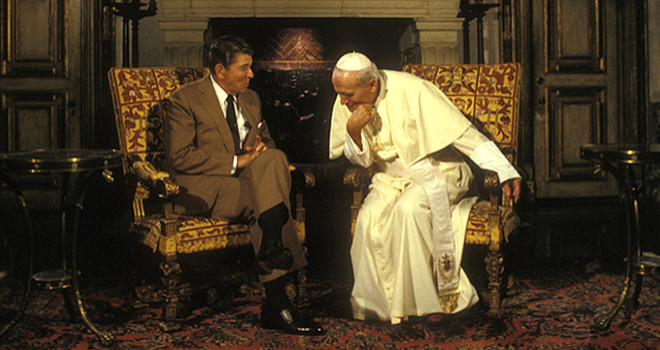 In a recent article by Paul Kengor published in Crisis Magazine, the historian summarized the first of two face-to-face meetings that took place between Pope John Paul II and Ronald Reagan on June 7, 1982 as follows:

“The two men shared their mutual convictions that they believed God had spared their lives from assassination attempts the previous year for a special purpose—to defeat atheistic Soviet communism. For John Paul II, that near-death experience had occurred on May 13, 1981, the Feast Day of Our Lady of Fatima, whose intercession he credited with saving his life.”

In doing research for his article, Kengor spoke with Reagan’s Ambassador to the Vatican, Frank Shakespeare.

As to the tenor of Reagan’s audiences with the pope, the second of which took place on June 6, 1987, the Ambassador said:

“Now, at some point, the pope would have said to Reagan: ‘For anyone to talk to me in depth about foreign policy, about Russia, about the Cold War, they will need to understand my thinking and relationship to Mary and also Mary’s appearance at Fatima and the whole relationship between Mary and Russia and the Cold War.’”

The central point of Kengor’s article is that Ronald Reagan, thanks in large part to his consultations with Pope John Paul II – both in person and otherwise – not only had knowledge of the message of Fatima; he understood it and embraced, and admirably so.

The evidence for this, he suggests, can be found in a speech that Reagan delivered before the Assembly of the Republic of Portugal as shown in the video below:

Those who take the time to listen to Reagan’s speech will find just what one might expect; a Protestant U.S. President extolling the virtues of democracy:

“We know there will always be answers if we trust in the people, if we go to them, give them the facts, and rely on them to make the right decisions.”- Ronald Reagan

No room there for the Social Kingship of Mary’s Divine Son or the Holy Catholic Church that He Himself established!

Even so, Kengor concludes:

“Amid the centenary of Mary’s first appearance in Fatima, it will be very intriguing [for Catholics] to learn that not only were the likes of their faithful pontiff John Paul II obviously interested in Fatima, but so was the pope’s vital Cold War partner, Ronald Reagan. And it was the two of them who joined together in the 1980s to wage battle against the beast—against the very communist threat that the Lady of Fatima had warned the world about in 1917. They, too, wanted to crush the head of that serpent. And ultimately, they prevailed.”

As I wrote yesterday, we must be alert to those who would twist the message of Fatima in such a way as to divorce it from the Catholic faith whole and entire and Our Lady’s warning about the “great apostasy” in the Church that would “begin at the top.”

By way of his article, Paul Kengor has provided us with a stellar example of precisely the danger of which I wrote.

That the Fatima message is being distorted in the pages of Crisis Magazine comes as little surprise. After all, this is a publication that routinely sings the praises of the Almighty Council; the same that Our Lady came to preempt.

What is cause for alarm, however, is the fact that even certain well-respected Fatima commentators are shining a positive light on Kengor’s article; as if it represents a contribution to the effort to draw attention to the authentic message given by Our Lady, when in truth, it is anything but.

Before I comment on Kengor’s article, I would ask that you please take a moment to consider what is at stake here:

Imagine one among the ill-informed masses (far and away the great majority of Catholics), who in this centenary year of the Fatima apparitions is moved to explore the topic more deeply; even going so far as to look beyond the confines of the Holy See and the neo-conservative shills who simply parrot its “official” position (Crisis among them).

Imagine that this sincere seeking soul lands on the website of an apostolate that has labored for decades, literally decades, at great cost to its founder and others, simply to invite such persons to open their eyes to the facts about Fatima; the same that reveal beyond any doubt whatsoever that recent popes have been complicit in attempting to bury Our Lady’s message – chief among them, Pope John Paul II.

And what will this poor person find upon arriving there?

Not only will he find a positive exposition on Kengor’s article, offered without any qualifications or warnings whatsoever, but also a link to the same.

In other words, the poor ill-informed seeker of truth concerning Fatima will find himself a convenient click away from the pages of Crisis Magazine – and given the wonderful things he just read about their article, why wouldn’t he click – where, if he investigates further, will soon find himself once again victimized by such deception and misinformation as:

“According to Sister Lucia, one of the Fatima children, Pope St. John Paul the Great accomplished this [the consecration of Russia] on March 25, 1984. The Soviet Union folded a few years later.” (Crisis Magazine article proposing that the conversion of Russia is already taking place!)

So, what exactly is at stake in all of this?

Simply put, good intentions aside, the entire message of Our Lady of Fatima is at stake!

Either we are squarely focused on disseminating and protecting the full and complete message of Fatima as best we know it, and that includes pointing to the crisis of faith about which Our Lady warned, or we are not.

If indeed we are, half-truths and confusing or deceptive treatments of Fatima can only be exposed and condemned wherever they are discovered.

There simply is no middle ground; no time for basking in feel-good vignettes planted amid a sea of disinformation that ultimately undermines Our Lady’s wishes.

With this in mind, here is what our hypothetical seeker of truth should  be told concerning Paul Kengor’s article:

Ronald Reagan, having been briefed by Pope John Paul II himself – in particular as it concerns Our Lady, Communism and Russia – clearly did not understand, nor embrace, the message of Fatima.

How could he considering the great lengths to which the Great Ecumenist went to ignore, distort, and ultimately lie about it?

Reagan’s first face-to-face meeting with the Polish pope came just three weeks after John Paul II had visited Fatima where, under the guise of a homily, he took it upon himself to dictate to Our Lady.

He repeatedly twisted her words, referring no less than five times to “the consecration of the world” to her Immaculate Heart, as if this  is what she had requested at Fatima; even going so far as to say of that consecration done by Pope Pius XII:

“Was not that consecration his response to the evangelical eloquence of the call of Fatima?”

It was as if he was telling Our Lady that she ought to be satisfied, if not by what Pius XII did, then by what her Son did:

“By the power of the redemption, the world and man have been consecrated.”

From there what did he do?

Even though Our Lady of Fatima made it perfectly clear how the defeat of atheistic Soviet communism would come about, John Paul II proceeded as if he had a better idea.

Among other abominations, he crafted the despicable Assisi events in pursuit of world peace rather than do as Our Lady of Fatima had asked.

He also dedicated his entire pontificate to recasting the Holy Catholic Church in the image and likeness of the very Council that she came to warn us about.

This, my friends, is the man that tutored Ronald Reagan on the meaning of the Fatima message.

The notion that either one of them genuinely understood, much less were faithful to, the message of Fatima is a monumental insult to Our Lady.

Long story short, Paul Kengor’s suggestion that Reagan and John Paul II “prevailed” in their battle against “the very communist threat that the Lady of Fatima had warned the world about in 1917” – as if the “errors of Russia” do not presently infect both the world and the Church, is condemnable in the extreme.

It’s bad enough that an unsuspecting seeker of truth might encounter such garbage on the pages of Crisis Magazine and believe it, but it is far worse still that such an article should be given even a hint of credence by those who are charged with the privilege of spreading and defending the Fatima message.

As the so-called “traditional Catholic” media landscape changes thanks to the “softening” that I mentioned yesterday (and cited here today), my sense of obligation to keep akaCatholic going increases all the more.

I have no doubt that many would like nothing better than for us to fail (the Devil among them!), but with your much needed help and the grace of God, we will continue telling important truths and condemning dangerous errors as best we are able.

Please consider making a one-time or monthly donation in support of our efforts.