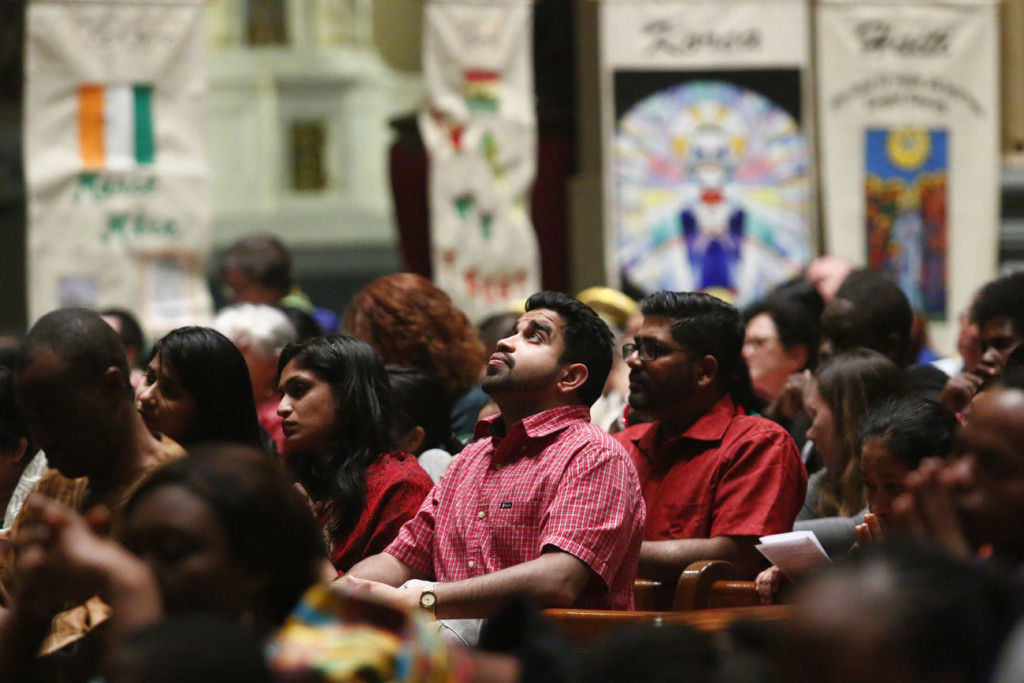 The increasing cultural diversity of the Catholic community in Philadelphia is one of the takeaways from a census of Mass attendance taken last October in parish [sic] of the Archdiocese of Philadelphia. Such diversity was on display at the annual Cultural Heritage Mass in March (above) in the Cathedral Basilica of SS. Peter and Paul, Philadelphia. (Photo by Sarah Webb)

File this under You Can’t Make This Stuff Up

There is good news in the Novus Ordo Land; specifically, from the Archdiocese of Philadelphia, which is shepherded by the Americanist prelate Archbishop Charles Chaput –  a longtime neo-conservative icon.

The diocesan newspaper recently ran a story under the headline:

While a regular reader of this space is likely to see two pieces of bad news in this headline, the spin coming from the Archdiocese is that the bad news (Mass attendance is down) is offset by the good news (cultural diversity at Mass is surging).

As for the reasons why fewer self-identified Catholics bother going to Mass, the writer labors to provide excuses. Among them:

Loyalty to parish boundaries has become more fluid … Parishioners still on the parish rolls will go to Mass at another church out of convenience of time or location.

Wait a minute. Aren’t these people counted in the census as well? Of course they are.

The article tells us that the figures are “based on actual head counts of successive Saturday evening/Sunday Masses for four weeks in October 2016.”

And then there is the comforting claim, “Hey, our diocese isn’t the only one that is dying!”

For instance, the writer says of the downward spiral that it mirrors the “lower numbers of participation across many religious communities in the United States,” and the deteriorating conditions in Philadelphia are “generally in line with other dioceses in the Northeast U.S.”

In other words, nothing to see here folks; it’s really just a sign of the times!

Most amusing in my view, however, is this preemptive defense of the collapse:

Of course, you can’t blame the pope…

Blame the pope? Hell, many reasonable people can’t even identify the pope!

Now on to the good news:

Masses are now celebrated in 19 languages besides English in archdiocesan parishes … The ethnic diversity of the Catholic population of the archdiocese continues to be reflected in the worship life of the local church.

The photo and caption above are taken from the story. Take another good look at it…

What in God’s holy name, you may be wondering, is a “Cultural Heritage Mass”?

Thankfully, “Catholic Philly” – the official diocesan newspaper of the Archdiocese of Philadelphia – made a brief video of just such an affair.

As you will see, it is a gathering wherein costumed human beings – many of whom have been misled to believe that they are taking part in the “ordinary form of the one Roman Rite” – come together to celebrate themselves along with their presider-bishop.

This, my friends, is what passes for Christian “unity” in the conciliar church-of-man – an earthbound cult that has no interest in the actual unity that is fostered and made evident in the Traditional Latin Mass.

It also happens to be a magnificent example of what happens when sinful men go about “altering the Faith of the Church – in Her liturgy, Her theology and Her soul.”

It is the “suicide” of which Our Lady of Fatima forewarned displayed in plain view.

The question no one is asking

For whom does Una Voce speak?