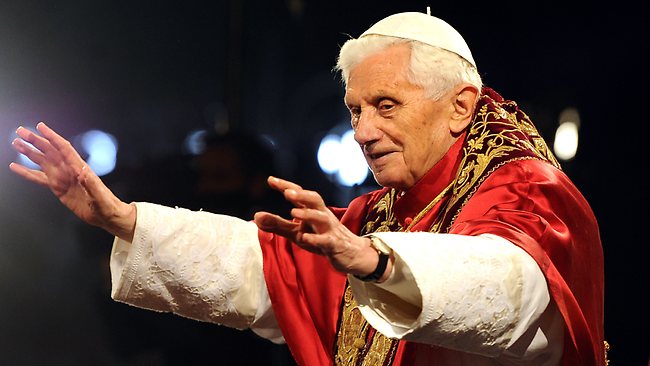 Move over santo subito, there’s a new game in town; canonization antemortem, that is, Sainthood before death.

Case in point, First Things has published an article (which also serves as a Foreword to Dr. Peter Kwasniewski’s recent book on the sacred liturgy, Noble Beauty, Transcendent Holiness) from German writer Martin Mosebach that amounts to a canonization of Pope Benedict XVI.

Benedict XVI is perhaps the only man alive with a more rabid fan base than Cardinal Raymond Burke, but the writer in this case is noteworthy.

Martin Mosebach has long enjoyed a rather solid reputation as a “traditionalist;” in particular as it concerns matters liturgical.

He has also been critical of Amoris Laetitia and widely quoted in favor of the dubia.

In other words, he’s not just another disoriented neo-con.

The First Things article is some 5,500 words long, but here are just a few of the highlights, beginning with Mosebach’s treatment of the Council:

We all can recall how bishops and theology professors, pastors and the functionaries of Catholic organizations proclaimed with a confident, victorious tone that with the Second Vatican Council a new Pentecost had come upon the Church—which none of those famous Councils of history which had so decisively shaped the development of the Faith had ever claimed.

So far so good. I mean, every “traditional” Catholic worth a wooden nickel realizes that this phrase, “new Pentecost” is a magnificent insult hurled straight in the direction of the Holy Ghost.

Mosebach goes on to explain why:

A “new Pentecost” means nothing less than a new illumination, possibly one that would surpass that received two thousand years ago; why not advance immediately to the “Third Testament” from the Education of the Human Race of Gotthold Ephraim Lessing? In the view of these people, Vatican II meant a break with the Tradition as it existed up till then, and this breach was salutary.

And who exactly are “these people” to whom Mosebach critically refers?

We’ll get to that in a moment, but before we do, note that just a few sentences later Mosebach states:

To be fair, we should remember that the popes attempted to counter this [notion of a “new Pentecost”] —with a weak voice and above all without the will to intervene in these aberrations with an organizing hand as the ruler of the Church.

To be fair? To be delusional is more like it.

Apparently, Mosebach doesn’t realize that the phrase “new Pentecost” comes from the Apostolic Constitution of Pope John XXIII, Humanae Salutis, wherein he formally convoked the Second Vatican Council; concluding with a prayer to the Holy Spirit that begins:

“Divine Spirit, renew your wonders in our time, as though for a New Pentecost…”

In other words, the concept of Vatican II as a “new Pentecost” isn’t the brainchild of rascally “bishops and theology professors, pastors and the functionaries;” it’s in the Council’s DNA.

He also appears not to know that Pope John Paul II, who dedicated his more than quarter-century long pontificate to implementing the Council, was pleased to take up the phrase:

The Catholic charismatic movement is one of the many fruits of the Second Vatican Council, which, like a new Pentecost, led to an extraordinary flourishing in the Church’s life of groups and movements particularly sensitive to the action of the Spirit.

More surprising still is that he doesn’t seem to realize that Benedict XVI – the man undergoing canonization antemortem at his hand – did his part to keep the lie alive as well:

The East affected him [John XXIII] so deeply that it led him to convoke the “new Pentecost of the Council” in docility to the Spirit and cordial openness to all peoples.

Let it be said that where Benedict has spoken of the conciliar “new Pentecost” as a desire as yet unrealized, he consistently does so in terms of blaming a faulty “interpretation” or “hermeneutic,” and not because the very notion is offensive in itself.

For his part, Mosebach does admit that the notion of a “new Pentecost” style break between the Church of tradition and that of Vatican II has some appeal. He states:

Anyone accustomed to trusting his eyes and ears could no longer convince himself that this was still the Church that had remained faithful for thousands of years, through all the changes of the ages.

He very quickly, however, dismisses the idea as mere illusion:

The Church can never exist in contradiction to itself, to tradition, to revelation, to the doctrines of the Fathers and to the totality of the Councils. This she cannot do; even when it appears as if indeed she has done so, it is a false appearance. A more profound hermeneutic will finally always prove that the contradiction was not a real one.

That “more profound hermeneutic” refers, of course, to the one invented by Benedict; namely, the “hermeneutic of continuity.”

One also notes that Mosebach does not hesitate to lump Vatican II in with “the totality of the Councils,” as if the 1960’s “pastoral” meeting bears resemblance to the likes of Trent and Nicea in some way other than by name.

Mosebach eventually turns his attention to Benedict’s relationship with the sacred liturgy; a topic considered to be well within his “wheelhouse.”

Already as Cardinal, Pope Benedict had pointed out again and again how greatly the Mass had been distorted and its meaning obscured by the celebration’s false orientation. He said that Mass celebrated facing the people conveyed the impression that the congregation is not oriented towards God, but celebrates itself. This correct insight, I admit, never made it either into a binding document of the Congregation for the Doctrine of the Faith or into papal legislation. 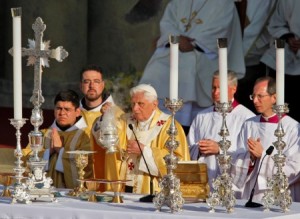 Guess where else this “correct insight” never made it?

Into the papal liturgies of the man he is all-too-pleased to canonize even before death.

If interested, you may read the rest of Mosebach’s article for yourself.

While he does make any number of good points with respect to the liturgy, the one thing that stood out to me overall is that here we have yet another example of what Cornelia Ferriera has dubbed a “traditional-conservative.”

Unfortunately, it appears that their numbers are steadily growing…