We talk about the “New Evangelization” an awful lot these days, don’t we?

In fact, talking about it and getting ready to prepare for it are among the hallmarks of the new evangelization. 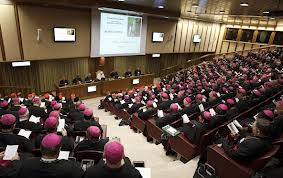 We arrange subcommittees, panel discussions, synods and symposiums; we assign task forces and action groups; we appoint chairmen and directors, gurus and czars, and all of them dedicate the preponderance of their energy to talking about the new evangelization.

Funny thing is, no one ever seems to get around to evangelizing; at least not as the Apostles would recognize it.

It occurs to me that one of the likely reasons is that none of the new evangelists want to be the first to admit that they haven’t a blessed clue what the “new evangelization” actually is.

Me? I’m not afraid to say it. I’ve interviewed bishops on the topic, and for the most part, I have no idea what the heck they’re talking about.

At the most recent Synod of Bishops, dedicated to (you got it) talking about “The new evangelization and the transmission of the Christian faith,” the 262 bishops, 45 experts and 49 auditors who participated in the multi-day event attempted to corral that elusive cat and came up with the following definitional gems:

– The new evangelization is primarily a spiritual activity…

– The new evangelization is a frame-of-mind…

It’s all so insubstantial, indeterminate, and theoretical.  Where once the Church intrepidly sought to convert the world to Christ, even to the point of inviting martyrdom, the new evangelists are busy discussing, amongst themselves, strategies for remaking fabric.

The more I comb through the various manifesti of the new evangelists, the more I am convinced that the primary reason they expend so much energy merely generating plans for getting in the right “frame of mind” is because they’ve forgotten what evangelizing really is and what it seeks to accomplish.

I’m deliberately striking a semi-humorous tone here mostly just to amuse myself in the face of a genuine tragedy; i.e., it’s a coping mechanism. But don’t let that fool you, this is a very serious problem, one that appears to be the result of a rather profound disconnect between the way in which the new evangelists conceive of evangelization, and the evangelizing mission Our Blessed Lord enjoined upon His Church.

There is, naturally enough, no better spokesperson for the new evangelization than the new pope, and shortly after his elevation to the papacy, the Holy See revealed the contents of an intervention given by Cardinal Bergoglio during the General Congregations in the days leading up to the conclave.

In his address, the future Pope Francis spoke about evangelization, saying:

He goes on to give a bit more detail saying, presumably in reference to the Church of today, “The self-referential Church keeps Jesus Christ within herself and does not let him out.”

“Thinking of the next Pope: He must be a man who, from the contemplation and adoration of Jesus Christ, helps the Church to go out to the existential peripheries, that helps her to be the fruitful mother, who gains life from ‘the sweet and comforting joy of evangelizing.’”

On careful consideration, this treatment reveals a substantial deviation from Apostolic thought, wherein the essence of evangelization as the future Holy Father conceived of it, for all intents and purposes, is inverted.

Is it really accurate to say, as Cardinal Bergoglio stated, that the Church “gains life” from evangelizing?

The answer, of course, is no; in fact, the very suggestion is exactly backwards.

The Catholic Church does not gain life through evangelization; she gives life by carrying out her evangelizing mission, and the difference between these two is substantial.

If one truly believes, as Catholic doctrine most certainly teaches, that the Church is that perfect society established by Jesus Christ, who entrusted to her His life giving truth, then the work of evangelization must be understood as one that gives life to the world as she converts it to Him, and in so doing manifests for all to see that she is His mystical Body and Bride who already possesses life and truth and goodness and unity in all of its magnificent fullness.

If Cardinal Bergoglio provided what can safely be considered a dependable reflection on the essence of the new evangelization, and I trust that he did, then the utter lack of evangelizing activity in our day suddenly makes perfect sense:

“The self-referential Church” of which the future Pope Francis warned is precisely the Church of the new evangelists, who see their work as a source of life; an ecclesiology wherein they imagine a Church that must look to her own efforts as the animating principle when indeed it is Christ – the very same Christ whose Kingship over States, societies and all individual persons they dare not preach.

That’s what I’m talkin’ about.

Why is the Fatima Center twisting Fr. Gruner’s history?

CONFIRMED: The “Ecumenical Mass” has arrived