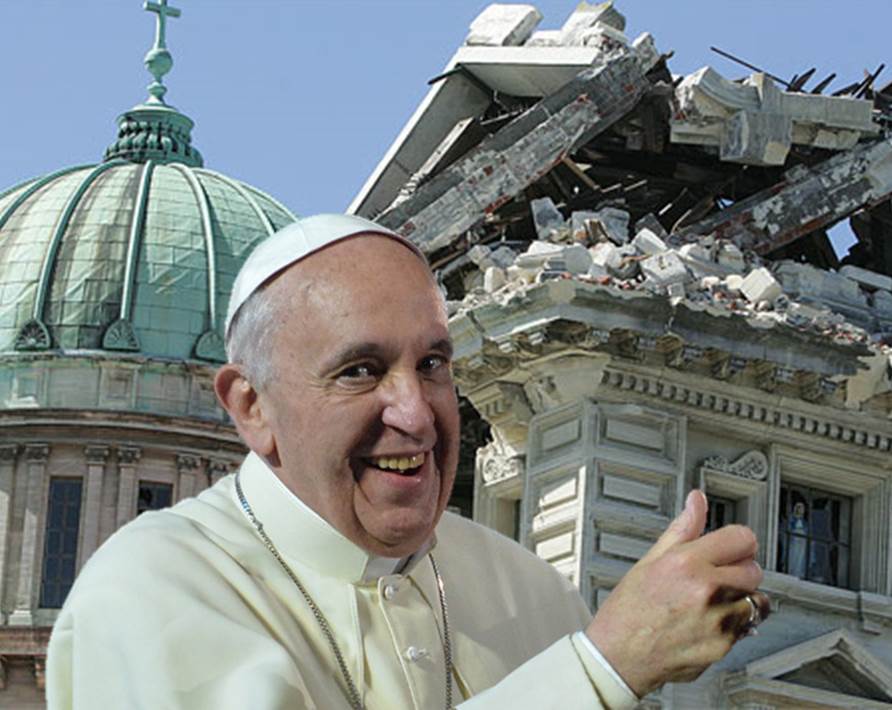 Conservative cheers resonated throughout much of Catholic social media when it was reported that on day one of the Synod of Bishops, Cardinal Péter Erdő, with Pope Francis seated directly by his side, delivered an address that forcefully reaffirmed traditional Church doctrine and discipline relative to the civilly divorced and remarried and those in homosexual relationships.

Spurring on the applause is the fact that the cardinal’s intentions seemed rather obvious; namely, to preemptively discredit the arguments that are expected to be made by those who favor the controversial proposals put forth by Cardinal Walter Kasper.

More provocative still is that just prior to Cardinal Erdő’s address, Pope Francis, who publicly praised Kasper’s proposal as an example of “profound and serene theology done on one’s knees,” struck a rather different, indeed opposite, tone.

Clearly attempting to set the stage for changes to come, the likes of which were suggested rather plainly in the events of last year’s Extraordinary Synod, Pope Francis encouraged the bishops present to view their gathering as that through which:

…the Church interrogates herself with regard to her fidelity to the deposit of faith, which does not represent for the Church a museum to view, nor even something merely to safeguard, but is a living source from which the Church shall drink, to satisfy the thirst of, and illuminate, the deposit of life.

These, my friends, are the ramblings of a modernist!

The contrast between Pope Francis and Pope St. Pius X, who is perhaps best known for his condemnations of modernism, is stunning.

In the opening paragraphs of his magnificent Encyclical Pascendi Dominici Gregis, for instance, Pope St. Pius X wrote of the duty assigned to the Office of Peter as being one that requires of him:

In his address to the bishops, Pope Francis, by contrast, stopped just short of suggesting that Divine revelation continues as he belittled the immutable nature of the deposit of faith; proposing instead that the bishops should be open to the movements of the so-called “God of Surprises” (the opinions of whom bear a striking resemblance to those of Jorge Bergoglio), saying:

In the Synod, the Spirit speaks by means of every person’s tongue, who lets himself be guided by the God who always surprises, the God who reveals himself to little ones, who hides from the knowing and intelligent; the God who created the law and the Sabbath for man and not vice versa; by the God, who leaves the 99 sheep to look for the one lost sheep; the God who is always greater than our logic and our calculations.

And yet, in spite of the fact that Cardinal Erdő’s address was tantamount to a smack down of the ideas expressed by Pope Francis just moments earlier, His Humbleness showed no signs of agitation as His Eminence proceeded, in some 7,000 words, to pull the rug out from under his sensible shoes.

How is it, one wonders, that Pope Francis is able to “proceed so calmly” (item #3 on his “Ten Secrets to Happiness”) amid the tidal waves of division, confusion and contention caused by his modernist leanings?

I would suggest that this is due to an attitude that is well summed up in the so-called “Serenity Prayer” which reads:

He does, however, possess the hubris (otherwise considered by the modernists as a sign of “courage”) to effect changes everywhere else, including in the area of “pastoral practices” that once altered would effectively undermine said doctrines and definitions.

For example, just days following his elevation to the papacy, The New York Times reported that as the Argentinian Senate was debating a gay marriage bill that would also secure adoption rights for homosexual couples in 2010, Cardinal Bergoglio supported a compromise measure that would legalize same-sex civil unions.

Such an endorsement on the part of Cardinal Bergoglio would be scandalous indeed; giving the impression that the Church sees value in homosexual relationships. (Sound familiar?) It would also run counter to guidelines that were established by the Congregation for the Doctrine of the Faith in 2003.

According to John Allen, then with the National Catholic Reporter:

One source for that story was an Argentine journalist named Sergio Rubin, co-author with Francesca Ambrogetti of an interview book [an authorized biography] with Bergoglio titled El Jesuita.

Allen went on to cite additional sources verifying the claim.

At this, the D.A.T.F. (Defenders of All Things Francis) sprang into action, at once denying that Cardinal Bergoglio ever favored any such civil unions, while also pointing to a letter he had sent to the Carmelite nuns of Buenos Aires just days before the Argentinian Senate vote took place wherein he encouraged them to pray for the bill’s defeat, writing:

Let’s not be naïve: This is a not simple political struggle, but an attempt to destroy God’s plan. It is not just a bill but a move of the Father of Lies, who seeks to confuse and deceive the children of God.

Catholic News Agency, for instance, quoted the Director of Agencia Informativa Católica Argentina (the equivalent of the USCCB’s Catholic News Service) as saying of Rubin’s claim:

He never said who said it and when. It’s wrong to invent something like this out of thin air. That article was severely criticized by the bishops. He probably was referring to (heterosexual) domestic partnerships, but not that anything be legalized.

It’s also wrong to sully the reputation of a writer whose account is supported by numerous others, not the least of which is Federico Wals, Cardinal Bergoglio’s spokesman.

As reported by ABC News (among others), Wals, in a 2010 statement made to the Argentinian media outlet InfoNews (links to which have since been scrubbed from the internet), said:

We don’t have a fanatic vision. What we are asking is that the laws are respected. We believe that we must propose more comprehensive civil union rights than currently exist, but no gay marriage.

The point is simply this; in spite of the D.A.T.F.’s attempt to promote a false dichotomy suggesting that the same prelate who so firmly encouraged the defeat of a “gay marriage” law wouldn’t support a civil union compromise, all indications are that Cardinal Bergoglio did precisely that.

All of which is perfectly consistent with the modus operandi of a churchman who proceeds with serenity even as he labors to change what he can while remaining cognizant of those things that he cannot.

So too are the events that unfolded at the Synod yesterday as Pope Francis gave an unscheduled intervention (about which I’ll have more to say later).

In it, he called on the bishops to stay the course set, not by Cardinal Erdő’s address, but by the Extraordinary Synod, saying that there are but three official documents to be considered as foundational moving forward – his opening and closing speeches given last year, and the controversial final report (the relatio synodi that included, at the pope’s insistence, articles on the divorced and remarried and homosexuals that did not receive two-thirds majority votes).

In so doing, Pope Francis made it clear that the Synod Fathers are free to continue pondering ways in which to manipulate “pastoral practices” in keeping with the “cries” of sinful men who allegedly breathe the very will of God.

He insisted, however, according to Vatican spokesman Father Federico Lombardi, that Catholic doctrine on marriage is not being called into question.

In other words, reaffirm what you must; change what you can.

The primary value of the day-to-day activities of the Synod is that it puts on display the make up of the various characters, and admittedly they are, if for no other reason, fascinating.

In the end, however, as has been suggested in this space and elsewhere, the Synod is truly little more than a charade, the result of which will be whatever the “God of Surprises” (aka Jorge the Humble) wants it to be.

“Do whatever she tells you”

COVID: Who knew what and when did they know it?