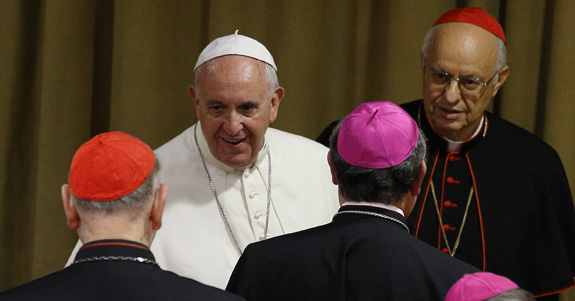 On Saturday, October 3rd at the Prayer Vigil in preparation for the Synod of Bishops now meeting in Rome, Pope Francis said:

On Horeb, he [Elijah] would get his answer not in the great wind which shatters the rocks, not in the earthquake nor even in the fire. God’s grace does not shout out; it is a whisper which reaches all those who are ready to hear the gentle breeze – that still, small voice. It urges them to go forth, to return to the world, to be witnesses to God’s love for mankind, so that the world may believe…

This is the same pope who, in an address to the United States Congress on September 24th, was utterly silent with respect to the Reign of Our Lord Jesus Christ over all men and all nations, to say nothing of the duty to serve Him that is incumbent upon all who exercise civil authority; choosing instead to invoke the Old Testament figure of Moses as the exemplar of justice.

As such, one can hardly be surprised that Pope Francis, on the eve of Synod, pointed to the story of Elijah as the quintessential model of he who receives Divine Revelation, almost as if to suggest that the “still small voice” spoken in the 9th century BC was something other than a precursor to the voice of Holy Mother Church; she through whom Christ the King speaks to all the world in resounding tones.

In this vein, just a year ago, in this same Square, we invoked the Holy Spirit and asked that – in discussing the theme of the family – the Synod Fathers might listen attentively to one another, with their gaze fixed on Jesus, the definitive Word of the Father and the criterion by which everything is to be measured.

Wow, that sounds rather Catholic. I’m afraid, however, that this a revision of what actually took place.

What Pope Francis asked on the eve of last year’s Extraordinary Synod was for the bishops to listen to the people, saying:

To find what the Lord asks of his Church today, we must lend an ear to the debates of our time and perceive the “fragrance” of the men of this age, so as to be permeated with their joys and hopes, with their griefs and anxieties … The essence of our prayer thus emerges within this framework. For the Synod Fathers we ask the Holy Spirit first of all for the gift of listening: to listen to God, that with him we may hear the cry of the people; to listen to the people until breathing in the will to which God calls us.

Be not disturbed by the apparent contradiction; Pope Francis clarified that his desire remains shepherds who are “humble” enough to be led by the sheep as he went on to say during Saturday’s vigil:

Every family is always a light, however faint, amid the darkness of this world …

Every family… Did you get that?

Presumably this means even families like that of his former student, Yayo Grassi, and his gay partner, to whom Pope Francis granted an audience during his recent visit to the U.S.

Charles de Foucauld, perhaps like few others, grasped the import of the spirituality which radiates from Nazareth … Through his fraternal closeness and his solidarity with the poor and the abandoned, he came to understand that it is they who evangelize us, they who help us to grow in humanity …

You see, for Pope Francis, it is not those who have the office of teaching, governing and sanctifying in the name of Jesus Christ, He to whom their gaze is ever turned, who evangelize the poor and the abandoned, it is the other way around!

And just to be certain that all present understood as much, he concluded:

Let us set out once more from Nazareth for a Synod which, more than speaking about the family, can learn from the family, readily acknowledging its dignity, its strength and its value, despite all its problems and difficulties.

Learn from the family…

Well, apparently not the families of so-called “traditionalists” (aka Catholics) who marry in the Church, persevere in fidelity through thick and thin, welcome children into the world as a gift from God, and supposedly have “an ostentatious preoccupation for the liturgy, for doctrine and for the Church’s prestige” (cf Evangelii Gaudium 95).

Because families such as these recognize the sheer folly of convening a Synod of Bishops to deliberate possible changes to pastoral practices that can treat of no such thing without undermining the immutable doctrines from which they spring; that’s why not.

All indications are that Pope Francis means to instruct the bishops to listen to the “cry of the people” such as it can be heard in the families of the civilly divorced and remarried, the cohabitating and the homosexuals.

How can it be that the pope, the Vicar of Christ, is intent on such things?

The short answer is simple; he’s a modernist who believes that the Church is “the product of the collective conscience,” and as such, “it is for the ecclesiastical authority, therefore, to shape itself to democratic forms, unless it wishes to provoke and foment an intestine conflict in the consciences of mankind.” (cf Pope St. Pius X, Pascendi Diminici Gregis 23)

You see, for the modernist, according to Pope St. Pius X (the last Roman Pontiff to be canonized before sainthood was turned into the Conciliar Lifetime Achievement Award for Service to the Revolution):

First of all they [the modernists] lay down the general principle that in a living religion everything is subject to change, and must change, and in this way they pass to what may be said to be, among the chief of their doctrines, that of Evolution. To the laws of evolution everything is subject – dogma, Church, worship, the Books we revere as sacred, even faith itself, and the penalty of disobedience is death.

In other words, those doctrinal truths expressed in pastoral practices that “traditionalists” (aka Catholics) understand as part and parcel of the immutable faith, Pope Francis, being a modernist, sees as that which is malleable and ripe for change according to the collective conscience of man in his current condition.

This being the case, he believes that there is every good reason to assemble a Synod of Bishops to fashion pastoral practices in such a way as to accommodate the “cries” of adulterers and active homosexuals.

To be fair, in treating essential matters of doctrine as if they are somehow debatable, it must be said that Pope Francis is simply following in the footsteps of Pope Paul VI, the same who established the Synod of Bishops with the promulgation of the Apostolic Letter, Apostolica Sollicitudo.

According to this Letter, the function of the Synod of Bishops includes:

Indeed, there are no “essential matters of doctrine” upon which legitimate disagreement exists (the name for such disagreement, in fact, is heresy), but alas, Papa Bergoglio, just as Montini before him, obviously believes otherwise.

It is thus that Pope Francis has convened the current Synod of Bishops in Rome, that they might gather the poisonous fruits born of the seeds that were planted by his modernist predecessor of whom he said:

“I am the first pope who … studied theology after the Council and, at that time, for us the great light was Paul VI.”

The “beatification” of seminarian Bergoglio’s “great light” served as a fitting exclamation point to the Extraordinary Synod of 2014.

With this in mind, one wonders what’s in store as Synod 2015 comes to a close; perhaps an announcement concerning an upcoming canonization?