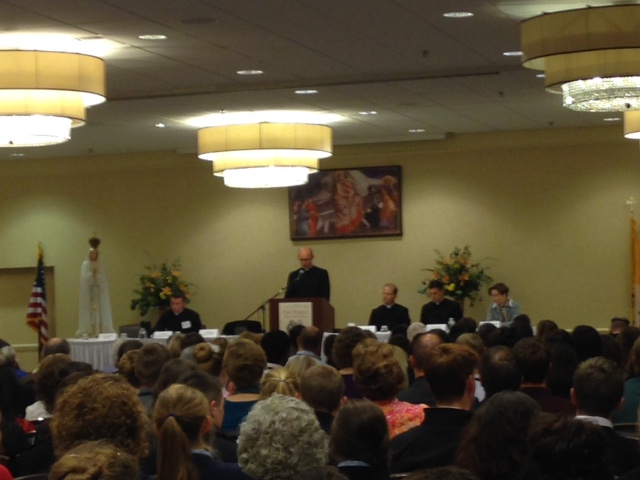 The Angelus Press Conference: The Family (available via live streaming, just follow the link) got underway this morning with Fr. Jürgen Wegner, Superior of the United States District of the Society of St. Pius X, offering a beautiful presentation on the nature of marriage.

Within just moments of beginning, Fr. Wegner made it clear that this conference will not be taking the so-called “inductive” approach favored by the modernist revolutionaries who are plotting and scheming at this very moment at the Synod of Bishops in Rome.

Archbishop Paul-André Durocher, the same who recently proposed the possibility of female deacons at the Synod, spoke with National Catholic Reporter about this inverted manner of theological reflection during last year’s Extraordinary Synod:

Unlike in the past, when bishops or theologians would deduce theology from general, sometimes idealized notions of God or humanity, the prelates at the Synod of Bishops on the family are using inductive reasoning to instead examine theology in the reality of families today, Canadian Archbishop Paul-André Durocher said.

“What’s happening within the synod is we’re seeing a more inductive way of reflecting, starting from the true situation of people and trying to figure out what’s going on here,” said Durocher, who leads the Canadian Conference of Catholic Bishops.

Note the upside down understanding of the Church’s mission wherein it is imagined that those who possess the sacred teaching office are called, not so much to teach, but to ponder the wisdom of the very people they are called to lead unto salvation.

As Pope St. Pius X forewarned us more than a century ago, this inversion of reality is a fruit of modernism; that “synthesis of all heresies” wherein it is imagined that doctrine evolves, saying:

Note here the appearance already of that most pernicious doctrine which would make of the laity a factor of progress in the Church.

Fr. Wegner, in the manner of a true son of the Church, therefore, rejects this contrived “inductive” approach in favor of establishing the focus of reflection for this conference on the family the glory of God and mankind’s call to communion with Him; or what revolutionaries, like Archbishop Durocher, consider the sometimes idealized notions of God or humanity.

With the faux humility so much in fashion in the Rome of today, Archbishop Durocher went on to say of the Synod bishops:

And we’re only, in a sense, starting to learn how to do this as church leaders, and this is going to take time for us, to learn to do this and together to come — as we reflect on this — to find what is the way that God is showing.

From where did Archbishop Durocher ever get the idea that the “true situation” of sinful men is a veritable school where churchmen learn the will of God?

From His Humbleness himself, of course!

Pope Francis, speaking at the prayer vigil prior to the opening of the Extraordinary Synod last October, said:

We ask the Holy Spirit for … the gift of listening for the Synod fathers: to listen in the manner of God, so that they may hear, with Him, the cry of the people; to listen to the people, until they breathe the will to which God calls us.

This manner of thinking encapsulates with pinpoint precision, in just a handful of words, why the Church now finds herself mired in so terrible a crisis; the focus of reflection on the part of her leaders – not just since the advent of the current pontificate, but from the time of the Second Vatican Council on forward – is no longer Jesus Christ, but man.

As I type, Fr. Gerard Beck, SSPX, Rector of St. Mary’s Academy and College, has just begun his conference on the topic of human nature and family life. As if right on cue, he offered the following diagnosis:

We live in an upside down world … where the basic concepts relative to the family have been falsified.

In attendance here are some three hundred faithful, jam packed in this place eager for the only thing that can possibly turn things aright; authentic Catholic truth dispensed by true fathers who draw their wisdom from a focus squarely oriented on Jesus Christ and His Bride, the Church.

I have every confidence that they will receive it in droves.

What the Catholic Hierarchy Should Know About Clerical Pederasty

Grease for the Synod skids?