Home
Blog Post
SSPX on the verge of regularization? 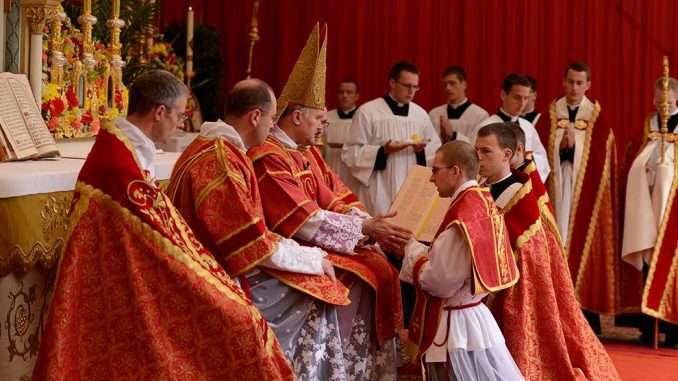 In a recent interview with the German newspaper, Die Zeit, Archbishop Guido Pozzo, the Secretary of the Pontifical Commission Ecclesia Dei, indicated that the SSPX has been offered a personal prelature on the following conditions:

[NOTE: Translation of the German text provided by Dr. Maike Hickson at OnePeterFive.]

The Church’s tradition is developing, but never in the sense of a novelty – which stands in contrast to the previous teaching – but which is a deeper understanding of the Depositum fidei, the authentic deposit of the Faith. In this [same] sense, all [the] Church’s documents have to be understood, also those of the Council.

These preconditions, together with the obligation to affirm the Creed, the recognition of the Sacraments and of the papal primacy are the basis for the magisterial declaration which the Fraternity has been given to sign. These are the preconditions for a Catholic, in order to be in full communion with the Catholic Church.

Based on this, it’s anyone’s guess as to how close we are to a “done deal.”

The biggest unknown concerns the actual contents of this “magisterial declaration” the Society is being asked to sign. (One should note that what is mentioned is only the “basis” for said declaration.)

If by Creed, Archbishop Pozzo means the Nicene or the Apostles Creed; clearly this represents no obstacle, but if he is referring to the 1989 Profession of Faith produced by the CDF, it could be problematic.

Much of the aforementioned Profession is unobjectionable, but it concludes thus:

“I adhere with religious submission of will and intellect to the teachings which either the Roman Pontiff or the College of Bishops enunciate when they exercise their authentic Magisterium, even if they do not intend to proclaim these teachings by a definitive act.”

This invites questions as to what exactly entails an exercise of the authentic Magisterium; e.g., does Amoris Laetitia qualify as that which one supposedly owes religious submission of will and intellect? It is to laugh!

The concept of “religious submission” comes from Lumen Gentium – 25 and it is, in this writer’s opinion, A most dangerous proposition.

At this, let’s look at some of Archbishop Pozzo’s other comments of note.

On the somewhat positive side of the leger, he says of the notoriously poisonous documents Nostra Aetate, Unitatis Redintegratio and Dignitatis Humanae:

They are not about doctrines or definitive statements, but, rather, about instructions and orienting guides for  pastoral practice. One can [thus legitimately] continue to discuss these pastoral aspects after the [proposed] canonical approval [of the SSPX], in order to lead us to further [and acceptable] clarifications.

Note the implied separation of “doctrine” and “pastoral practice.” Where have we seen this before???

He went on to say of Nostra Aetate in particular:

The secretary for the Unity of Christians said on 18 November 1964 in the Council Hall about Nostra Aetate: “As to the character of the declaration, the secretariat does not want to write a dogmatic declaration on non-Christian religions, but, rather, practical and pastoral norms.” Nostrae Aetate does not have any dogmatic authority, and thus one cannot demand from anyone to recognize this declaration as being dogmatic.

Do you hear that rumbling in the distance? It’s Bergoglio’s rabbinical cabinet rushing to convene an emergency meeting…

This declaration [Nostrae Aetate] can only be understood in the light of tradition and of the continuous Magisterium. For example, there exists today, unfortunately, the view –  contrary to the Catholic Faith – that there is a salvific path independent of Christ and His Church. That has also been officially confirmed last of all by the Congregation for the Faith itself in its declaration, Dominus Jesus. Therefore, any interpretation of Nostrae Aetate which goes into this [unfortunate and erroneous] direction is fully unfounded and has to be rejected.

This is a rather sharp condemnation (as far as such things go in the medicine-of-mercy era) of the document that emerged from the Pontifical Commission for Religious Relations with the Jews in December 2015.

While this is welcome, one notices the terminally flawed “hermeneutic of continuity” mindset on display here as Nostra Aetate itself is being held blameless; as if it has nothing whatsoever to do with the havoc that followed in its wake.

In truth, the conciliar texts as a whole must be rejected; not just particular interpretations.

That’s not to say that the conciliar text is utterly devoid of truth; it contains many reiterations of authentic doctrine as previously taught, but as Sacred Scripture plainly warns – a little leaven leaventh the entire lump.

That said, I do not believe that it’s necessary for Rome to come to this same conclusion before the SSPX can accept the offer of a regular juridical structure.

The only thing that will be necessary moving forward is for the Society to remain steadfast in proclaiming the true faith, and that necessarily means condemning the conciliar text and not limiting itself to criticizing supposedly false interpretations (which very often are truly nothing other than applications of what the documents themselves plainly state.)

When asked if the notion that the Council documents have varying degrees of doctrinal weight constitutes a development in Rome’s understanding, Archbishop Pozzo said:

This is certainly not a [later] conclusion on our part, but it was already clear at the time of the Council. The General Secretary of the Council, Cardinal Pericle Felici, declared on 16 November 1964: “This holy synod defines only that as being binding for the Church what it declares explicitly to be such with regard to Faith and Morals.” Only those texts assessed by the Council Fathers as being binding are to be accepted as such. That has not been [later] invented by “the Vatican,” but it is written in the official files themselves.

Pay close attention to what the archbishop said here and one will detect a glaring and yet subtle contradiction:

The quote of Cardinal Felici that is given is very plain; the only conciliar propositions that are binding are those that the Council “explicitly declares” as such. So far so good, but then Archbishop Pozzo immediately follows by saying that texts “assessed by the Council Fathers as being binding are to be accepted as such.”

The difference is considerable.

The former concerns an objective reading of the text itself; e.g., either the Council explicitly declares that such-and-such is binding or it doesn’t. Simple.

The latter, by contrast, invites one to make a subjective judgment as to the Council Fathers’ intent wherein even in the absence of any such explicit declaration, one may conclude that certain texts are indeed binding.

Where did Archbishop Pozzo get that idea?

From the very declaration of Cardinal Pericle Felici, which states in its fullness:

Taking conciliar custom into consideration and also the pastoral purpose of the present Council, the sacred Council defines as binding on the Church only those things in matters of faith and morals which it shall openly declare to be binding. The rest of the things which the sacred Council sets forth, inasmuch as they are the teaching of the Church’s supreme magisterium, ought to be accepted and embraced by each and every one of Christ’s faithful according to the mind of the sacred Council. The mind of the Council becomes known either from the matter treated or from its manner of speaking, in accordance with the norms of theological interpretation.

My friends, this is perfect example of the kinds of flaws one finds throughout the conciliar texts; a clear statement followed by one that opens the way for contrary opinions to flourish, which is precisely why the documents themselves must be rejected.

Archbishop Pozzo demonstrates the danger at hand well when he offers the following as examples of conciliar propositions that are supposedly binding:

…the teaching on the sacramentality of the Episcopal office and its consecrations as the fullness of Holy Orders; or the teaching on the primacy of the pope and of the college of bishops in union with its head [sic], as presented in the Dogmatic Constitution Lumen gentium, and as interpreted by the Nota explicativa praevia which had been requested by the highest authority.

A thorough review of the teachings cited reveals that there is no open declaration of bindingness.

To be clear, in the case of episcopal consecration being understood as the fullness of Holy Orders, this may well be an expression of the authentic Magisterium that binds the faithful, but let’s be clear – if so, this is not due to the teaching of Vatican Council II, as if the conciliar text itself binds.

All in all, my takeaways from Archbishop Pozzo’s interview are as follows:

– The process of regularization of the Society is far from complete.

– The movement on the side of Rome, while far from satisfactory, is noteworthy.

– In spite of this, the Council continues to be Rome’s Golden Calf and until it is buried confusion and disorientation will reign.

John Vennari: A message and a tribute