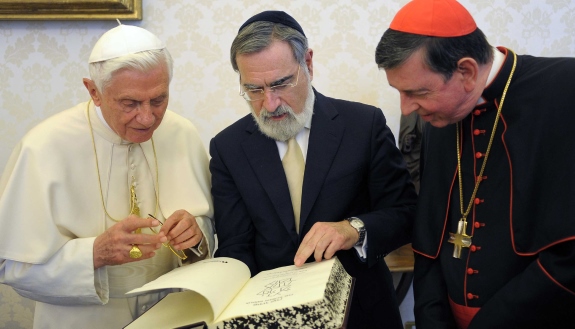 While it is right to express outrage over the Pontifical Commission for Religious Relations with the Jews’ recently published document on Nostra Aetate, the  only responsible response must go well beyond the document in question to include the source of the very errors that inform it.

On December 10th – the Pontifical Commission for Religious Relations with the Jews published a 10,000 word treatise on Nostra Aetate – the Second Vatican Council document on the Church’s relation to non-Christians.

Many of my colleagues in Catholic media are outraged by this document. Now, don’t get me wrong. I am pleased to see their outrage. I am even more pleased to see it being shared by those who are just now having their eyes opened to this extent of this crisis.

And yet, I am pleased to see this document published.

Simply put, because it makes perfectly plain a point that I, and others, have been making for some time: Nostra Aetate contains grave error.

I’ve linked two important articles below, both originally written in March, that demonstrate as much; meticulously and clearly. In support of this argument, these articles offers excerpts taken from a speech given by Cardinal Kurt Koch – the President of the Commission for Religious Relations with the Jews.

The reaction to these articles from those who are unwilling to condemn the Council sometimes went as follows:

Sure, I can see how certain churchmen, like Cardinal Koch, have used Nostra Aetate to teach heresy with respect to the Jews, but I don’t agree that this is what the Council really meant…

While this argument was weak half a year ago, today it is entirely unsustainable. You see, what this most recent document from the Pontifical Commission provides is nothing less than the “official” meaning of Nostra Aetate’s treatment of the Jews.

Today, there can no longer be any question whatsoever as to what the Council is teaching; much less is there any question as to how that teaching is to be applied in the life of the Church if accepted.

In any case, the punchline to this latest contribution to the post-conciliar apostasy in Rome can be summed up as follows:

Catholics are henceforth encouraged to consign the Jews to eternal death. I’ll say that again just in case you missed it:

Catholics are henceforth encouraged to consign the Jews to eternal death. In other words, let them rot in Hell.

Of course, the Captains of the church-of-man that emerged following the so-called “New Pentecost” of Vatican II don’t use those precise words, but make no mistake, that is exactly what they are saying.

“It is easy to understand that the so–called ‘mission to the Jews’ is a very delicate and sensitive matter for Jews because, in their eyes, it involves the very existence of the Jewish people.”

Please allow me to translate: The Jews are uneasy about the Church’s mission because rejecting Jesus Christ, well… this goes to the very heart of what it means to be a Jew. If we invite them to “Repent, and be baptized every one of you in the name of Jesus Christ for the forgiveness of your sins” as St. Peter did on the day of Pentecost, we may as well ask them to become a new creation.

But isn’t that what Baptism does for everyone? Why is it OK to bring an individual heathen, or Buddhist, or Muslim to new life in Christ, but not the Jews?

“This question also proves to be awkward for Christians, because for them the universal salvific significance of Jesus Christ and consequently the universal mission of the Church are of fundamental importance.”

Notice what is being done here: The “fundamental importance” of the Church’s “universal mission” is being reduced to an esoteric concept that is valid only for Christians. In other words, the document speaks of “universal mission” in one breath, while deeming it less-than-universal in the next. This is classic conciliar contradiction.

The document goes on:

“The Church is therefore obliged to view evangelisation to Jews, who believe in the one God, in a different manner from that to people of other religions and world views. In concrete terms this means that the Catholic Church neither conducts nor supports any specific institutional mission work directed towards Jews.”

Christ the King sent His disciples forth to baptize all nations. St. Peter, who was there that day, understood this to mean the Jews as well as much as anyone else.

The apostates running the show in Rome today, however, say, “No, we have no evangelizing mission to the Jews!”

A true Catholic can not fail to recognize that this is tantamount saying the Jews can go to hEll for all we care!

According to newchurch, by contrast, we have no mission to the Jews because their salvation is secure in spite of their rejection of Jesus Christ!

“From the Christian confession that there can be only one path to salvation, however, it does not in any way follow that the Jews are excluded from God’s salvation because they do not believe in Jesus Christ as the Messiah of Israel and the Son of God.”

First, note the qualifier, from the Christian confession… This is an obvious attempt to suggest that there are more than one “confessions” or sets of belief that are valid. The Christian confession, on the one hand, that proclaims Jesus Christ as the solitary way of salvation, and the Jewish confession that rejects Him entirely.

As for the consequences of that rejection?

To the men of newchurch, there are none. They cannot possibly say so any more plainly. I’ll repeat it in case you missed it:

By contrast, Jesus Christ, apart from whom no one is included in “God’s salvation” – that’s Catholicism 101 – said, He who rejects me rejects God. And yet the Unholy See is insisting that this “does not in any way follow?”

This latest abomination from Rome is saying that Jesus Christ is optional for salvation.

This is either the truth, or it’s wholesale apostasy. If it’s the truth, then Our Blessed Lord is a liar, His first Vicar, St. Peter, is a damned fool, and so are all of the Saints and Doctors of the Church who ever lived! We can’t have it both ways.

So, in which will you believe – that this abominable document from Rome represents a total repudiation of the Christian faith, or that Jesus Christ is a liar? It’s one or the other.

It’s not a very difficult choice, and not just for so-called “traditionalists” – aka Catholics.

Presumably, it’s not a difficult choice for Michael Voris, or Jimmy Akin, or Karl Keating, or anyone else who fashions themselves a “conservative” Catholic.

The difficult part, at least for many of them, is going to be coming to grips with what all of this really means.

I was speaking the other day with my good friend Damian Goddard, and we came to the conclusion that while our conservative friends know that something is wrong in the Church; in fact, they talk about it often, they’ll only go so far in addressing the underlying malady.

In other words, they’ll admit that the Church has headache, but they can’t bring themselves to acknowledge that the Body of Christ on earth has something more akin to cancer.

In the present case, remember what we’re talking about here: This document recently published by the Pontifical Commission for Relations with the Jews isn’t the product of just another crackpot cardinal spouting off with a bunch happy homespun heterodoxy.

No; it’s much more than that. This document is nothing less than the “official” teaching of Vatican Council II in action.

This being the case, while it is right to express outrage at this terrible affront to Our Blessed Lord and our Holy Catholic faith, the only responsible response must go beyond the document in question itself to include the errors of Vatican II that inform it.

It will be interesting to see how many of those with a voice in Catholic media have the wherewithal to stand up and be counted for Christ in the aftermath of this attack, knowing as I do firsthand, that this side of Heaven, there is a price to be paid for doing so.

What does St. Paul mean by “all Israel”?