On 27 March, Professor Roberto de Mattei delivered an address in Washington, D.C., on the 100th anniversary of Our Lady’s appearance at Fatima.

The complete text of the address has been published at Rorate Caeli  and it is well worth reading in full as the celebrated Catholic historian offers many excellent points and interesting insights.

That said, there are certain points with which I must disagree with Professor de Mattei.

For instance, he states:

Discussions that have opened up in recent years about this “Third Secret” risk however in obscuring the prophetic force of the Message’s central part, summed up in two decisive sentences:  Russia “will scatter her errors throughout the world” and “in the end, my Immaculate Heart will triumph”.

Frankly, I am surprised to find such an illogical assertion coming from Professor de Mattei; especially since he states elsewhere:

The message revealed by Our Lady at Fatima contains three parts, called secrets, which form an organic, coherent whole.

The “discussions” to which he refers are those that concern the still hidden text of the Third Secret; namely, that which conveys the very words of Our Lady herself!

How can such discussion “risk” obscuring the “prophetic force” of the message that she came to deliver?

In truth, the exact opposite is true:

Failing  to keep the discussion alive and pressing for answers as to the hidden text would be tantamount to destroying  the coherency of Our Lady’s messages, and worse, complicity in the cover-up that seeks precisely to obscure them.

It is no secret (no pun intended) based upon the testimony of trustworthy men that the hidden portion of the Third Secret concerns a warning, the contents of which, in part, were described by the future Pope Pius XII as follows:

“The dangers which menace the Church is a divine warning against the suicide of altering the Faith, in Her liturgy, Her theology and Her soul.”

More specifically, there is good reason to believe that this portion of the Third Secret concerns “a bad council and a bad Mass.”

This, I would argue, is more appropriately considered the “central part” of Our Lady’s prophetic message, and for a very simple reason:

Russia never would have been able to spread her errors throughout the world as successfully as she has if only our churchmen (specifically, the popes) had faithfully followed Our Lady’s wishes; not just by means of consecrating that nation to her Immaculate Heart, but also as it pertains to the still hidden text.

To be more specific:

If Pope John XXIII had revealed the Third Secret in 1960 as Our Lady requested, and more importantly, had he heeded its warning thereby pre-empting the disastrous events that unfolded at Vatican Council II, the nations of the world would have more readily recognized the philosophy of atheistic Communism and its Utopian ideals as errors.

As it is, the greater part of the world, while not identified as “Communist” properly speaking, has come to embrace the tenets of secularism, humanism and relativism that Professor de Mattei rightly described as being rooted…

…in the theories of materialism and Marxist evolutionism; in other words, on the denial of any spiritual reality and any stable and permanent element in man and society.

That “permanent element in man and society” is most cogently expressed in the Church’s doctrine concerning the Social Kingship of Jesus Christ; the same that was deliberately ignored at Vatican Council II in order to make room for a new ordering principle called “Religious liberty.” 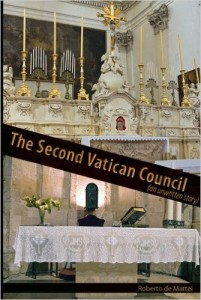 Professor de Mattei, whose book The Second Vatican Council – An Unwritten Story  I highly recommend, would most certainly agree.

In his Washington lecture, he said:

“Unfortunately the Catholic Church has promoted, and is promoting, this ‘peaceful coexistence’ with evil.”

Indeed it has, and the protocol manual that guides modern day Rome’s diplomacy with the Devil is derived directly from the text of Vatican Council II; most notably the document Dignitatis Humanae – which I have described as an “Apostolic cease fire” by which the mission of Christianizing the nations as given to the Church by Christ the King was effectively abandoned.

Professor de Mattei goes to some lengths to describe precisely what he considers the “errors of Russia” to entail.

Russia’s errors are those of an ideology which opposes the natural and Christian order, by denying God, religion, the family and private property. This complex of errors has a name: Communism and has in Russia its universal centre of diffusion.

Too often Communism has been identified with a purely political regime, neglecting its ideological dimension, whereas it’s precisely its doctrinal dimension that Our Lady highlights.

I agree entirely, which is precisely why the “central part” of the Fatima message cannot be properly understood apart  from a discussion about the still hidden text of the Third Secret and, therefore, Vatican II – the “bad council” that launched an all-out assault against the traditional doctrine concerning Church-State relations and the Sovereign Rights of Christ the King; thereby making it possible for Communistic ideology to flourish.

With this in mind, I would submit that the “errors of Russia” of which Our Lady forewarned primarily concern the separation of Church and State and atheism.

NB: These particular errors came to feature prominently in Russia in 1917 – the year of Our Lady’s appearance at Fatima, and 1929 – the year in which she returned to Sr. Lucia, as promised, to formally request the consecration of that nation. [Please see HERE for an in-depth examination of this topic.]

Nearing the end of his lecture, Professor de Mattei said:

The antidote to the dictatorship of relativism [as epitomized by “the errors of Russia”] is the doctrinal and moral purity of the Immaculate Heart of Mary. It will be Our Lady and not men, who will destroy the errors that threaten us. Heaven, though, has asked for mankind’s concrete collaboration.

I agree with these sentiments entirely.

That said, let us acknowledge that even the most sincere among us (including yours truly) have fallen victim, in some degree or another, to the diabolical disorientation that has come to define the post-conciliar age.

This, I believe, is why our efforts to spread the message of Fatima so often seem to reflect a diminished sense for the primacy of Jesus Christ.

Let me be clear: I am not singling out Professor de Mattei or anyone else; indeed, I include myself in this observation.

As such, I have come to believe that it is necessary for us “Fatima Crusaders” (to borrow the name of Fr. Gruner’s publication) to undertake a certain reorientation; making it plain in our writing, our conversations, and our conferences that our confidence in the Triumph of the Immaculate Heart of Mary rests squarely upon our humble embrace of the “sweet and saving yoke” of Christ the King.

As I write on this Good Friday, contemplating the Passion of Our Blessed Lord, I cannot help but think of the “Crowning with thorns” that was carried out at Vatican Council II as He was unceremoniously dethroned in favor of mankind.

As stated above, it was this as much as anything else that made it possible for the dictatorship of relativism, secularism, materialism and atheism epitomized by “the errors of Russia” to spread like wildfire.

As such, we do well to acknowledge that the remedy is first and foremost the Social Reign of Christ the King.

Bear in mind, this is not in place of the Fatima message given by Our Lady, who is, after all, she who always and everywhere instructs her children, “Do whatever He tells you.”

Rather, the Fatima message and the Kingship of Christ go together.

You see, when our attention, and more importantly, the pope’s attention, is focused once more on the Sovereign Rights of Christ the King; only then will the words of the Queen Mother be taken seriously.

One follows the other, and I would submit to you that the virtual enthronement of man in the place of Christ the King at Vatican II lies at the very heart of our failure to abide by the wishes of His mother, Mary, Our Queen.

As the Professor rightly pointed out, Our Lady’s wishes include “mankind’s concrete collaboration.”

He said, “The call to penance in the Fatima message is also a call to combat the errors which are corrupting the whole of society today.”

For those who are willing to embrace the previously suggested reorientation; basing our efforts to spread the Fatima message on the primacy of Christ, the words of Pope Pius XI as written in his magnificent Encyclical Quas Primas provide the answer:

While nations insult the beloved name of our Redeemer by suppressing all mention of it in their conferences and parliaments, we must all the more loudly proclaim his kingly dignity and power, all the more universally affirm his rights.  (Quas Primas 25)

In our day, unlike the day in which Pope Pius XI wrote, it is necessary for us to proclaim the Sovereign Rights of Christ the King, not just to the nations at large, but to Rome where He is insulted daily!

So, let us do so confident that it is only when our churchmen are willing to once more affirm our Redeemer’s rights that the Triumph of the Immaculate Heart of Mary will at long last be near.

The two-edged sword of our age