Home
Blog Post
Francis: A model of clarity and consistency 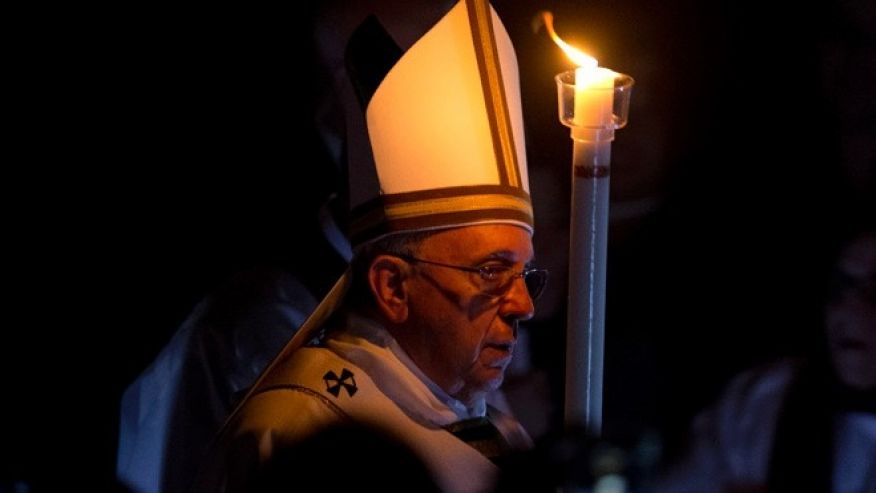 As his sermon for the Easter Vigil makes plain, not even the Resurrection of Our Lord from the dead is capable of unmooring Francis’ thoughts from the temporal concerns of almighty mankind.

Commenting upon “Mary Magdalene and the other Mary” who went to Jesus’ tomb only to discover that He is risen, Francis saw fit to rattle off an all-too-familiar laundry list of social injustices:

“In their faces we can see reflected all those who, walking the streets of our cities, feel the pain of dire poverty, the sorrow born of exploitation and human trafficking.  We can also see the faces of those who are greeted with contempt because they are immigrants, deprived of country, house and family.  We see faces whose eyes bespeak loneliness and abandonment, because their hands are creased with wrinkles.  Their faces mirror the faces of women, mothers, who weep as they see the lives of their children crushed by massive corruption that strips them of their rights and shatters their dreams.”

Nowhere reflected in his sermon was even a modicum of concern for the supernatural ends for which man was created; much less any sense of the true significance of the Lord’s resurrection.

Francis went on to say:

“By daily acts of selfishness that crucify and then bury people’s hopes.  By paralyzing and barren bureaucracies that stand in the way of change.  In their grief, those two women reflect the faces of all those who, walking the streets of our cities, behold human dignity crucified.” [Emphasis added.]

How very clever; stealing words from the language of our Lord’s Passion for use as metaphorical expressions that seek to recast the meaning of Easter into the planks of a political platform; as if the Sacrifice of Christ is ordered toward nothing more than the elimination of social inequality.

I, for one, find this repulsive.

It sickens me in a way similar to those occasions when Barack Obama would cite Sacred Scripture; striking the image of a man treading on foreign soil, pretending to be a citizen, but only as a means to an end.

That is not to say that Francis is altogether unconcerned with Church related matters.

On the contrary, he is deeply concerned about such things; albeit in the manner of a politician.

And so he took the occasion of the Easter vigil to campaign against the opposition party:

“When the High Priest and the religious leaders, in collusion with the Romans, believed that they could calculate everything, that the final word had been spoken and that it was up to them to apply it, God suddenly breaks in, upsets all the rules and offers new possibilities.”

Can there be any doubt that Francis was speaking not of the Pharisees of old, but rather of those in our day who take the Divine Law, the immutable doctrines of the Faith and the bi-millennial practice of the Church seriously; i.e., rigid Catholics like us who believe that “the final word” has indeed been spoken in precisely those matters that the false “god of surprises” (aka Jorge Bergoglio) seeks to upset in Amoris Laetitia?

Truly, with every passing day it seems that the mountain of evidence attesting to the utter lack of Catholic faith in this man somehow manages to grow larger.

As the title to this post suggests, Francis is nothing if not clear and consistent.