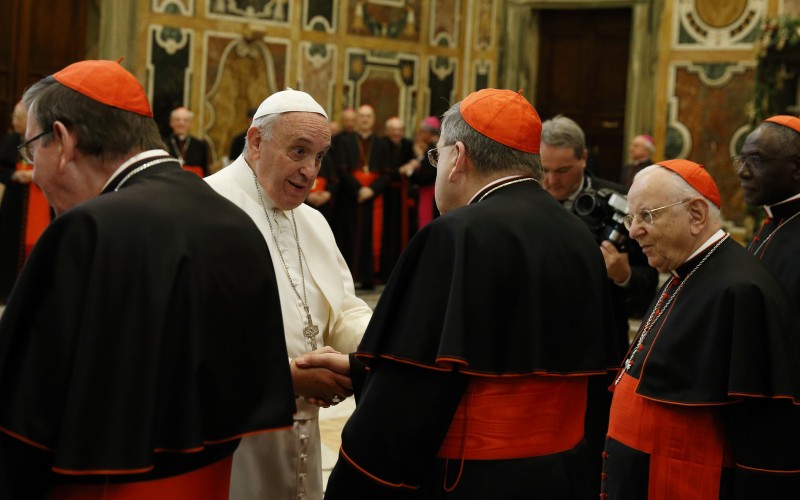 InfoVaticana has published yet another interview with Cardinal Raymond Burke; this one covering a wide variety of topics.

You can read it there in its fullness. Here, I will touch only on his comments concerning the dubia.

As I pointed out several weeks ago, Cardinal Burke’s tone has become progressively softer since his November 2016 interview with Edward Pentin of National Catholic Register when said:

There is, in the Tradition of the Church, the practice of correction of the Roman Pontiff. It is something that is clearly quite rare. But if there is no response to these questions [dubia], then I would say that it would be a question of taking a formal act of correction of a serious error.

NB: Burke promised a formal act of correction of the Roman Pontiff due to his serious error.

In January, however, he spoke only of correcting certain truths that only seem to be called into question.

In March, Cardinal Burke could only bring himself to speak of correcting the “situation.”

In his interview with InfoVaticana, Cardinal Burke was asked, Do you think there will be a formal public correction to Pope Francis?

To which he replied:

That it is not clear yet. Normally speaking, before taking that step, the Cardinals would approach once again the Holy Father personally to say: ‘Holy Father, the matter is so grave that we must correct it, and I trust that the Holy Father will respond at that moment.’

First, let’s be clear; there is nothing “normal” about this situation.

Secondly, lest anyone make too much of the word “public,” the “formal act of correction” that Burke first mentioned was always understood to be public since a private correction would do nothing to resolve the crisis concerning the errors in Amoris Laetitia.

Finally, while some will pin their hopes for a correction on the fact that Cardinal Burke didn’t flatly say, “No,” it certainly looks like we may be heading in that direction.

Recall that Cardinal Brandmüller (another of the Dubia Brothers) said that the act of correction would first take place in camera caritatis; i.e., privately, “in the room of charity,” as opposed to publicly.

Burke is simply reiterating this in his InfoVaticana interview; even going so far as to express confidence (genuine or not) that “the Holy Father will respond at that moment;” with the implication being that Francis will somehow deign to correct his own errors.

Why anyone in their right mind would believe such a thing is beyond me, but there’s a bigger problem; Francis apparently has no interest in inviting the Dubia Brothers into his camera.

Asked about his relationship with Francis, Burke said that he hasn’t spoken with Francis since they met in November when the topic of conversation (at least the publicly revealed part) concerned the Order of Malta.

“I don’t know what he is thinking … and he has not granted me an audience,” he said.

The interviewer, to his credit, asked for clarification, and Burke confirmed that he has in fact asked for an audience, but his request has thus far been denied.

It’s not clear whether Burke’s request was for a one-on-one audience, or on behalf of all four of the Dubia Brothers, but he did say that the other three cardinals, to his knowledge, haven’t received any sort of answer from Francis either.

It is interesting, is it not, that Francis had room in his busy schedule last week to entertain a quartet of Muslim imams, but he just can’t seem to find time for his cardinals – the rigid ones anyway.

So, the “pope” who refuses to answer five simple “Catholicism 101” questions in the midst of widespread doctrinal confusion and sacrilege isn’t going to invite the authors of said questions for a sit-down so they can put him on the spot…

If you find this surprising, you just might believe what Cardinal Burke had to say about Benedict the Abdicator:

“I have never spoken with him about the dubia.”

Asked about a timeline for a correction, Cardinal Burke said:

I really cannot speak about that because it is a matter which has to be approached with great respect and delicacy. And I do not want to suggest a date that would in any way affect negatively the handling of the matter or would show disrespect to anyone involved.

Might I remind the Cardinal that the “matter” at hand is an “Apostolic Exhortation” that, among other atrocities, accuses God of asking for adultery and fornication?

I’d say that the days of “delicacy” passed a long time ago.

Lastly, there is a tendency on the part of the neo-conservative kind to comfort themselves with the lie that the Church has been down this road before.

Asked about historical precedents for the formal correction of a pope, Burke replied:

I think, for example, of Pope John XXII who was teaching wrongly about the Beatific Vision.  Certain bishops and theologians pointed this out to him. At first he resisted their correction, but then, before he died, he did retract what he had said that was in error.

This is factually incorrect. An excerpt from the 1914 Catholic Encyclopedia should suffice to clarify the matter:

Before his elevation to the Holy See, he [John XXII] had written a work on this question [concerning the Beatific Vision], in which he stated that the souls of the blessed departed do not see God until after the Last Judgment. After becoming pope, he advanced the same teaching in his sermons. In this he met with strong opposition…

The papacy of John XXII took place in the early 1300’s; a time when relatively few persons were privy to the sermons of the pope.

Francis, by contrast, disseminates his errors globally; in the case of Amoris Laetitia, on papal letterhead, seal and all.

Pope John wrote to King Philip IV on the matter (November, 1333), and emphasized the fact that, as long as the Holy See had not given a decision, the theologians enjoyed perfect freedom in this matter. (ibid.)

NB: At the time of the controversy, there was no dogmatic definition on the topic.

With respect to the errors in Amoris Laetitia, the very words of Our Lord, as well as those of the Council of Trent, are involved.

After having been petitioned to confirm the traditional understanding in the matter, Pope John XXII did not “resist” as Cardinal Burke maintained; rather, he made it clear that he was only stating his personal opinion, and even appointed a commission of theologians to study the Church Fathers in order to settle the matter faithfully.

I dare say there is no need for me to point out just how unlike the example of Pope John XXII is from that of the “humble” Francis.

The simple truth is that there has never been a pope in the history of the Church who has attacked dogmatic teaching as formally and as frequently as Francis has.

How long is this nonsense going to continue?

One week from today, the dubia will have gone “officially” unanswered for seven months!

Unofficially, however, it has been answered in no uncertain terms; most notably in the praise that Francis has heaped upon bishops who have issued so-called “pastoral guidelines” that rest squarely on the heresies set forth in his Love Letter to Satan, Amoris Laetitia.

Enough with these pointless interviews.

Enough misrepresenting weakness as a function of “great respect.”

It’s time for Cardinal Burke et al. to step up to the plate lest time runs out and they find themselves having to answer to Christ for their inaction.