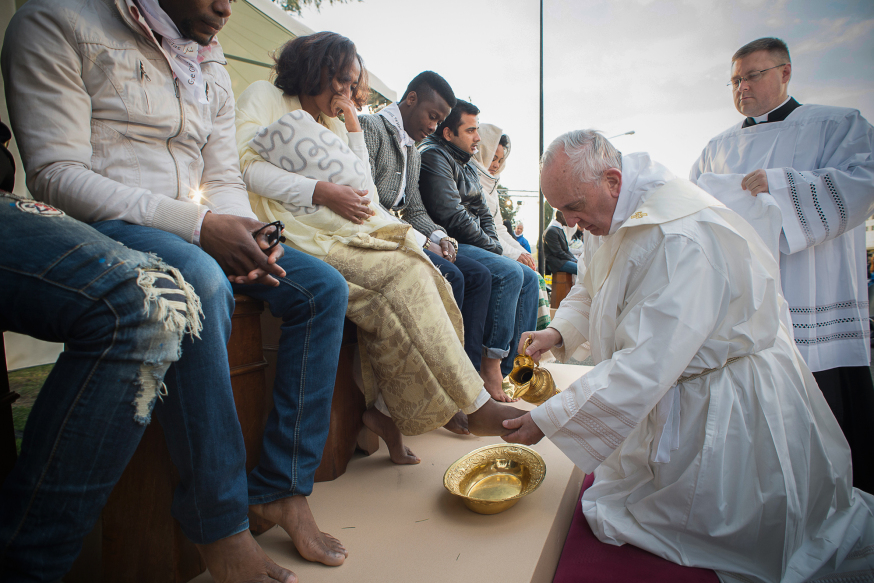 As we approach the Feast of the Lord’s Resurrection, it is no coincidence that the Christological heresy that lies at the very heart of Francis’ “magisterium” (so-called) is once again coming into sharper focus.

During his sermon on Palm Sunday, he said:

So as we joyfully acclaim our King, let us also think of the sufferings that he will have to endure in this week.  Let us think of the slanders and insults, the snares and betrayals, the abandonment to an unjust judgment, the blows, the lashes and the crown of thorns…  And lastly, the way of the cross leading to the crucifixion.

There is a thread of truth in these words as Our Blessed Lord will indeed endure much in the way of slanders, insults, snares and betrayals during this Holy Week; primarily thanks to Francis himself.

For instance, for the Mass of the Last Supper on Maundy Thursday, he will visit Paliano Prison near Rome where he will once again drop to his knees before mere men; washing and kissing their feet.

The Humblecam, of course, will be rolling.

Shortly thereafter, while at the altar whereupon Our Lord will be present in the Most Holy Eucharist, this same Francis will once again refuse to drop to his knees.

Obviously, this is not what Francis meant when he said that Our Lord will endure slanders, insults, snares and betrayals during this week.

So, what did he mean?

It appears that Francis is fixated on Christ as “Suffering Servant;” to the exclusion of Christ the King.

You see, for him, Christ is not so much He who defeated even death itself and gloriously reigns over all things; rather, it is He who even now willingly submits to the powerful of this world only to be beaten and bloodied all over again.

In other words, Francis speaks (and has consistently spoken over the last four years) as though the Resurrection, the singular event in the life of Christ that proves His divinity more clearly than any other, never happened. This is the same event after which:

When giving to his Apostles the mission of teaching and baptizing all nations, he took the opportunity to call himself King, confirming the title publicly, and solemnly proclaimed that all power was given him in heaven and on earth. These words can only be taken to indicate the greatness of his power, the infinite extent of his kingdom. (Pope Pius XI, Quas Primas 11)

Francis continued to share his image of Our Lord’s “kingship” in his Palm Sunday sermon, saying:

He is present in our many brothers and sisters who today endure sufferings like his own: they suffer from slave labour, from family tragedies, from diseases…  They suffer from wars and terrorism, from interests that are armed and ready to strike.  Women and men who are cheated, violated in their dignity, discarded…  Jesus is in them, in each of them, and, with marred features and broken voice, he asks to be looked in the eye, to be acknowledged, to be loved.

OK, whatever we do for the least of these… On this level, these words are defensible, but Francis does not mean to say what the Gospel says; rather, he goes on:

It is not some other Jesus, but the same Jesus who entered Jerusalem amid the waving of palm branches.  It is the same Jesus who was nailed to the cross and died between two criminals.  We have no other Lord but him: Jesus, the humble King of justice, mercy and peace.

We have no other Lord but him: Jesus, the humble King…

Yes, there is but one Jesus (He who truly suffered and died), but missing entirely from this exhortation is any sense of the Resurrection (He who truly rose from the dead unto glory) and thus an authentic understanding of the Kingship of Christ.

Indeed it is true, human beings are still subjecting one another to all manner of suffering here in the valley of tears, but this is the case precisely because they refuse to subject themselves to He who reigns over all things as King!

Again, we turn to the words of Pope Pius XI:

When once men recognize, both in private and in public life, that Christ is King, society will at last receive the great blessings of real liberty, well-ordered discipline, peace and harmony. (Quas Primas 19)

As long as men believe, as Francis apparently does, that the Kingship of Christ is best understood in terms of His submission to the authorities of this world and His suffering at their hands, the great blessings of real liberty, well-ordered discipline, peace and harmony will never be realized.

In short, Francis’ impoverished Christology is built upon a heresy; one that entails the denial of Our Lord’s divinity.

Our Lady at Fatima warned us. She let us know that this day would come.

To find out how, set aside the time to view, and perhaps to share, the following if you’ve not already.

Never mind the lowly messenger (me), but please, take heed of the message. Truly we are living through the days of chastisement.

Has Francis been corrected?

Justice Scalia: A man of “true faith and allegiance”