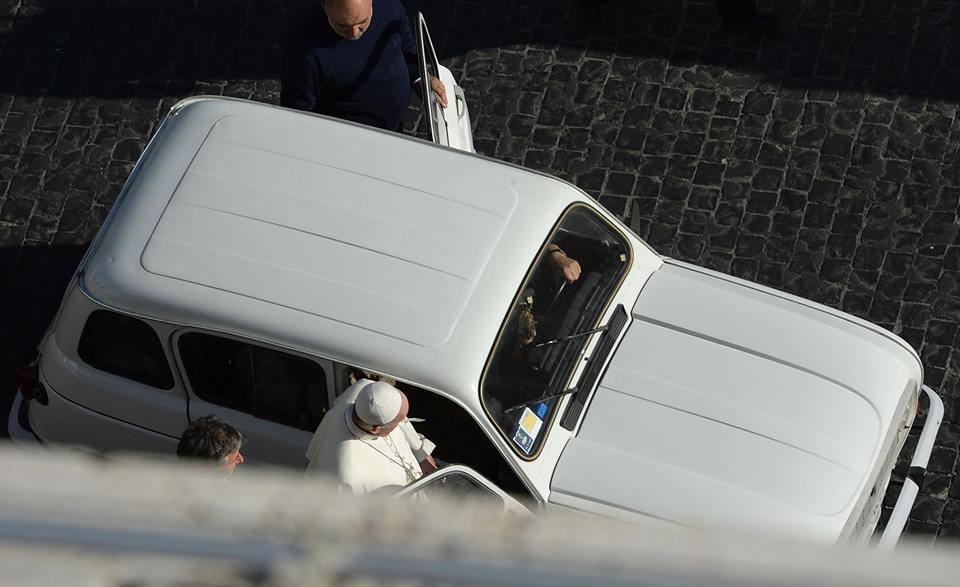 After dedicating two recent posts to Pontifex Humilis Maximus, I was fully prepared to move on to greener pastures, then this:

According to a post on the Vatican’s News.va FaceBook page, Pope Francis recently added to his fleet of Poormobiles (a.k.a. Humblemobiles).

Shortly before the prayer vigil on Saturday (September 7, 2013), Pope Francis received a visit at Santa Marta from Fr. Renzo Roca … a 69 year-old parish priest from the city outskirts, could identify with the Pope’s suggestion that priests use “sober” means of transportation, and wrote the Pope to offer him his own car: “I came here to give the Pope my Renault 4, which has covered 300,000 miles”, said Fr. Renzo.

“On August 10, the Pope rang me. The first thing he said? ‘Praised be Jesus Christ’. And then he asked me if I really wanted to give it away, if anybody else might need it, and especially if I had a car for myself.”

Andrea Tornielli at Vatican Insider provided some additional details about the conversation.

They spoke for a while about the mission in the peripheries. “I told him I wanted him to have the car. “Are you sure? He asked me. “Do you really want to give it to me? Wouldn’t it be better to give it to the poor?” I told him that that car had already done a great deal for the poor and that it was now time it went to the Pope and in the heat of the moment I raised my voice without meaning to. “Do you have another car?”, he asked me. When I said I had a newer car, the Pope agreed. “We agreed I would deliver the Renault to him on Saturday 7 September, the day of the big peace vigil for Syria.”

I don’t know… maybe my stone-cold, tradition-loving cockles are simply beyond warming at this point, but I’ve had my fill of these stories.

I’d like to just ignore these stories, I really would, but avoiding them is nearly impossible; the Vatican PR machine’s output of humbleganda under Pope Francis is enough to make Pravda during the Stalin regime look like a high school newsletter.

The million dollar question (which rumor has it will soon be reduced, by papal mandate, to 2 Euros) is this: Do any of these “acts-of-humility-proudly-on-display” actually help the poor?

Think about it: If the pope decided to eat McDonald’s Value Meals (in full view of the public, of course) for the rest of his papacy, would impoverished families suddenly have more food on their tables? If he slept on a futon, would the homeless have waterbeds? If he bathed in a rain barrel, would the Sudanese suddenly have clean water?

The answers are no, no and no.

Oh, but it encourages others to live more simply, which leads to a greater awareness of the poor, the blissfully hypnotized masses will say.

Yes, this much is true, and it works like this:

If all of us stop eating at our favorite restaurants, refuse to replace our worn out pants, and make do with our nineteen year old lumpy mattresses, pretty soon, our awareness of the poor will skyrocket as our hometowns are overrun by unemployed waiters, clothiers and furniture salesmen.

Even so, the reason the Vatican’s spotlight-on-simplicity is so disturbing isn’t so much that it doesn’t actually benefit the poor; it’s that it’s wrong.

“Beware of practicing your piety before men in order to be seen by them; for then you will have no reward from your Father who is in heaven. Thus, when you give alms, sound no trumpet before you, as the hypocrites do in the synagogues and in the streets, that they may be praised by men. Truly, I say to you, they have received their reward. But when you give alms, do not let your left hand know what your right hand is doing, so that your alms may be in secret; and your Father who sees in secret will reward you. (Matthew 6:1-4)