In response to my recent post, Pontifex Humilis Maximus, a FaceBook friend (and sincere Catholic) commented, “Christ would have never lived in the ‘apostolic palace’. I hope that Pope Francis has started a trend toward simplicity.”

While this response pointed specifically to the pope’s residence, as opposed to the broader topic of papal regalia and comportment that I addressed, I trust this sentiment is shared by any number of people, Catholic and otherwise, and so I want to give it specific treatment.

There are a number of flaws in the WWJD (What would Jesus do?) approach, wherein one presumably looks back to the Lord’s public ministry as described in Sacred Scripture as the model for how the pope should live and conduct himself.

Chief among them is precisely the error described in the previous post; it focuses on Christ the Servant apart from Christ the King.

Another way to phrase it, however, is to say that it comes dangerously close to a denial of the resurrection.

You see, what appears to be absent from my friend’s understanding, as well as from Pope Francis’ public persona, is the fact that the Roman Pontiff is not simply the Vicar of the itinerant Jesus of Nazareth who died on the Cross; he is, more properly speaking, the Vicar of Him who defeated death, is risen from the dead, and now reigns in glory.

The Scriptures demonstrate that Our Lord, even prior to His resurrection, was not opposed to being lavished in the manner of royalty:

Now when Jesus was at Bethany in the house of Simon the leper, a woman came up to him with an alabaster flask of very expensive ointment, and she poured it on his head, as he sat at table. But when the disciples saw it, they were indignant, saying, “Why this waste? For this ointment might have been sold for a large sum, and given to the poor.” But Jesus, aware of this, said to them, “Why do you trouble the woman? For she has done a beautiful thing to me. For you always have the poor with you, but you will not always have me. In pouring this ointment on my body she has done it to prepare me for burial. Truly, I say to you, wherever this gospel is preached in the whole world, what she has done will be told in memory of her.” (Matthew 26:6-13)

“You will not always have me,” said the Lord, and yet we know that we do have Him in other ways, one of them being in the person of His Vicar on earth, the pope.

As the Lord’s interaction with the woman who anointed Him demonstrates, Jesus does not dismiss as harmful, or even meaningless, our attempts to shower Him with finery; on the contrary, He tells us that such “is a beautiful thing.”

Of course, the more cynical among us will protest that the anointing was accepted by Our Lord only as a preparation for His burial, but this only brings us right back to where we began; the Lord’s burial was not an end unto itself; rather, it was the gateway to that which inaugurated the reign of Christ the King, the resurrection!

Shortly after his elevation to the papacy, Pope Francis said, “How I would like a poor church for the poor.” 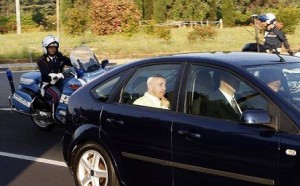 I’m not sure anyone knows precisely what the Holy Father meant by this, but let us hope that he doesn’t imagine that his program of stripping the office of its finer accoutrements, such as moving about Rome in an unmarked Ford as opposed to a luxury car somehow serves the poor; it doesn’t.

What it does serve is a particular image of not just this pontificate, but of the Petrine Office as a whole; one that invites those who apparently have little appreciation for what it truly is to draw ridiculous conclusions.

Consider, for example, the commentary published by the Huffington Post:

Now here’s a Pope who practices what he preaches. Pope Francis arrived at the papal summer home, Castel Gandolfo, in a humble Ford Focus which was a far cry from the luxury cars of his predecessor, Pope Benedict XVI, who travelled around town in vehicles that included a custom-made Renault, a BMW X5, and a Mercedes. In contrast, Pope Francis isn’t even spending the summer in the luxurious retreat of Castel Gandolfo, preferring more modest accommodations in Rome.

If nothing else, these comments underscore the message that Jesus clearly delivered in the house of Simon the leper; withholding luxurious things from Him, and I would argue, from the office and the person of His Vicar as well, is largely superficial, ultimately doing little to serve either the poor or the mission of the Church.