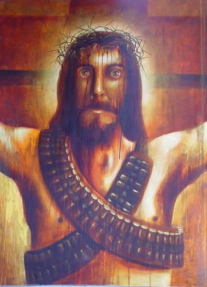 Back in July of 2012, I wrote, “If you’re not familiar with ‘liberation theology,’ chances are you’ll be hearing more about it in the weeks and months ahead as Archbishop Gerhard Mueller, the newly appointed Prefect of the Congregation for the Doctrine of the Faith (CDF), is said to be a student, friend and supporter of Fr. Gustavo Gutiérrez, the ‘father’ of the controversial movement.”

So, I was off by about a year.

Now, with Pope Francis reportedly scheduled to meet with Fr. Gutiérrez in the next few days, some commentators are speculating that the Pontiff who wants “a poor church for the poor” is about to “rehabilitate” the movement.

As an aside, when previously censured liberals are “rehabilitated” (e.g., John Courtney Murray at Vatican II) it never means that the wayward have renounced their heretical views; on the contrary, it simply means that the liberals have taken over.

I for one do not expect Pope Francis, who has a history of combating Liberation Theology, to put his stamp of approval on the movement, but that doesn’t mean that there is no cause for concern.

For one thing, Archbishop Mueller – the Church’s “chief doctrinal watchdog” (Prefect of the Congregation for the Doctrine of the Faith) – remains a Gutiérrez devotee.

“The theology of Gustavo Gutiérrez, independently of how you look at it, is orthodox,” Archbishop Mueller said in 2008, ultimately describing liberation theology as “participation in the life of the poor” and “their eagerness to respect human rights and demand for fair share in cultural and political life of democracy.” [i]

So, what do I expect from Fr. Gutiérrez’s meeting with the pope? Well, one thing I do not expect is a clear, public condemnation of Liberation Theology. Popes just don’t do that sort of thing anymore.

It’s pure speculation on my part, of course, but what I do expect to result from this meeting is some kind of statement about how Fr. Gutiérrez and Pope Francis share a common concern for the poor, along with accolades for “all that Fr. Gutiérrez has done in service to poorest among us,” or something to that effect, which the good Father and other Liberation Theologians will then treat as a green light for promoting, with renewed vigor, their twisted ideas.

Have you fallen for fish tales and fables?