Home
Blog Post
Shall He find any faith on earth?

If at any given moment in the life of the Catholic Church, whose teaching mission it is to transmit across the ages the Faith that comes to us from the Apostles in exactly the same meaning and always in the same substance, there ever comes a time when that which is officially purported to be Catholic would be practically unrecognizable as such by the popes who reigned just decades prior, then surely a terrible crisis has beset her.

Unfortunately, those of us living today needn’t look very far to find a breathtaking example of just such a scenario; one that to my knowledge is utterly unprecedented.

For instance, imagine how Pius X, Benedict XV, Pius XI, and Pius XII might have reacted if given a glimpse at what passes for a celebration of Holy Mass today? To be clear, I’m not talking about those things that all of us recognize as liturgical abuses; rather, I’m talking about the very rite itself as approved, and even celebrated, by the majority of the world’s bishops, including the Bishops of Rome.

It would probably take considerable effort just to convince these Pontiffs of old that what they were witnessing really is “official” Catholic worship!

What would these same Holy Fathers have said if informed that the following statements were being disseminated to the faithful as Catholic teaching by certain churchmen?

– “Jews and Christians do not belong to two different peoples of God; they form but one people of God”

– “The right to religious freedom and its expression in both public and private has its foundation in the very dignity of the human person and is inviolable, even as it relates to those who oppose Jesus Christ and do not live up to their obligation of seeking the truth”

They would likely order that the perpetrators be summoned to explain themselves and to bring their teachings in line with Catholic doctrine under threat of censure.  (Incidentally, all of these questionable statements find their origins in the text of Vatican II.) 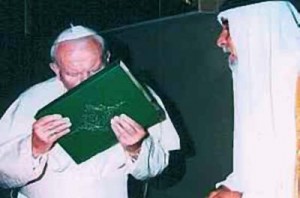 If that’s not enough, just imagine how the aforementioned popes would have reacted if informed, “In this very century, one of your successors will publicly venerate a Koran, pray in a synagogue, and host heathens, heretics and pagans to ‘pray’ with him at ecumenical gatherings at the Basilica of St. Francis in Assisi.”

The poor men in white would likely either die of laughter, if you were unsuccessful in convincing them that this is really going to happen, or of horror, if you did. And that’s even before letting them in on the incredible fact that this very same pope would immediately find himself on the fast track to canonization; beatified just five short years after his death!

And yet, there are those among us who are either invincibly ignorant of the current crisis, or in adamant denial of the same. Many simply go about their Catholic lives under the pretense that the challenges we face are nothing out of the ordinary, when in truth we are suffering from an ecclesial cancer of unprecedented tenacity that is rapidly destroying the Church from within.