As I write, on this the eve of the Fourth of July, which here in the United States is known and celebrated as Independence Day, freedom and revolution are well on my mind. 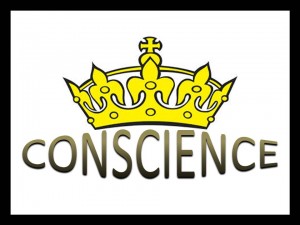 In an attempt to justify their campaign to anoint “conscience” as king under the banner of religious freedom, the bishops of the United States have turned to a rather unlikely source for support; the would-be deposed and rightful Occupant of the throne.

Like every other revolution against a sitting Sovereign, this uprising also requires the enlistment and arming of rebels, to which end the USSCB has created a veritable online recruiting station and weapons depot, a webpage dedicated to “Conscience Protection.”

Among the artillery being made available there is a “one-pager” entitled, “Christ the King,” that presumably purports to demonstrate “continuity” between the manifesto of the movement – either Dignitatis Humanae of Vatican Council II or the First Amendment to the Constitution of the United States  (pick whichever one you happen to prefer; they’re essentially the same), and the immutable doctrine set forth in the Encyclical of Pope Pius XI, Quas Primas.

Under the audacious subtitle, “THAT HE WOULD REIGN IN OUR HEARTS,” (all caps in the original), the document begins:

In 1925, Pope Pius XI instituted the Feast of Christ the King in his encyclical letter Quas Primas in response to growing nationalism and secularism around the world. He had the foresight to realize that secularism could soon wage awful wars against the Church.

During the early twentieth century, in Mexico, Russia, and in many parts of Europe, atheistic regimes threatened not just the Catholic Church and its faithful but civilization itself. Pope Pius XI’s encyclical gave Catholics hope and—while governments of men around them crumbled—the assurance that Christ the King shall reign forever. Pope Pius XI said that Christ “reign[s] ‘in the hearts of men,’ both by reason of the keenness of his intellect and the extent of his knowledge, and also because he is very truth, and it is from him that truth must be obediently received by all mankind.”

From here the tract veers immediately into the well-worn revolutionary slogans with which those of us in the United States are all-too-familiar; our first American freedom… let us thank God for the gift of religious liberty… the freedom of conscience of all people of faith… liberty and justice for all.

To “Cotton Candy Catholics” and “Neo-Con Weigel Wannabes” who persist in a state of denial concerning the crisis at hand, this fallacious blather likely seems rather harmless; even laudable.

Those grounded in the unchangeable truths of the Faith, on the other hand, cannot help but be thoroughly incensed by the sheer hubris of those who would mislead the unwitting into believing that Pope Pius XI intended nothing more in Quas Primas than to promote a generic spiritual concept, fully embraceable by heretics and Catholics alike, wherein Christ the King may “reign in our hearts.”

Here’s the cold, hard, objective truth, like it or not: The doctrine expressed in Quas Primas utterly eviscerates the false, humanistic precepts that form the very foundation of the present revolt. PERIOD.

You see, far from the deliberately incomplete caricature being offered in the Conference’s rebellious “one-sheet,” Pope Pius XI made it exceedingly clear in Quas Primas that the reign of Jesus Christ is not simply a spiritual one; rather, Our Lord has dominion over the entire created order:

If we ponder this matter more deeply, we cannot but see that the title and the power of King belongs to Christ as man in the strict and proper sense too. For it is only as man that he may be said to have received from the Father “power and glory and a kingdom,” since the Word of God, as consubstantial with the Father, has all things in common with him, and therefore has necessarily supreme and absolute dominion over all things created … It would be a grave error to say that Christ has no authority whatever in civil affairs, since, by virtue of the absolute empire over all creatures committed to Him by the Father, all things are in His power.  (QP 7, 17)

Quoting his venerable predecessor, Pope Leo XIII, the Holy Father left no room for confusion as to the Lordship of Jesus Christ even over those nations that have yet to be converted to the one true Faith:

His empire includes not only Catholic nations, not only baptized persons who, though of right belonging to the Church, have been led astray by error, or have been cut off from her by schism, but also all those who are outside the Christian faith; so that truly the whole of mankind is subject to the power of Jesus Christ. (QP 18)

For all of the revolutionary talk of “liberty and justice for all” as a function of “freedom of conscience” disseminated by the USCCB, Pope Pius XI laid out the solitary path to the attainment of such divinely given gifts, and therefore, the very purpose of the most excellent Feast he intended to establish:

When once men recognize, both in private and in public life, that Christ is King, society will at last receive the great blessings of real liberty, well-ordered discipline, peace and harmony … Nations will be reminded by the annual celebration of this feast that not only private individuals but also rulers and princes are bound to give public honor and obedience to Christ. It will call to their minds the thought of the last judgment, wherein Christ, who has been cast out of public life, despised, neglected and ignored, will most severely avenge these insults; for his kingly dignity demands that the State should take account of the commandments of God and of Christian principles, both in making laws and in administering justice, and also in providing for the young a sound moral education. (QP 19, 32)

Perhaps the most unsettling exhortation put forth in this great Encyclical is offered not to the faithful, but directly to the bishops:

Make it your duty and your task, Venerable Brethren, to see that sermons are preached to the people in every parish to teach them the meaning and the importance of this feast, that they may so order their lives as to be worthy of faithful and obedient subjects of the Divine King. (QS 29)

By all appearances, the duty has been shirked and the task set aside in favor of fomenting an uprising wherein the faithful are willfully deprived of the bread of sound doctrine concerning the Sovereign rights of their Divine Savior; given instead the stones of a revolution that is destined to fail, based as it is on the lie that conscience is king.

So what is a Catholic to do? Pope Pius XI tells us:

While nations insult the beloved name of our Redeemer by suppressing all mention of it in their conferences and parliaments, we must all the more loudly proclaim His kingly dignity and power, all the more universally affirm His rights. (QP 25)

It is our duty, therefore, to answer this call and to do that which so many of our leaders will not. Might I suggest as a good beginning studying the beautiful Encyclical that the USCCB doesn’t dare quote, much less teach, in its fullness, Quas Primas, and joining me in letting our bishops know that we will stand with them amidst whatever persecution they may face should they decide to once again proclaim, as Pope Pius XI so clearly did, Christ the King as the only way to authentic freedom.