Home
Blog Post
Some Catholic perspective on the Fourth of July 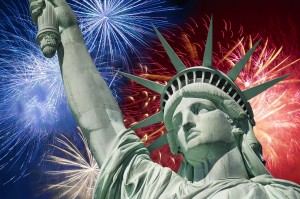 Not to sprinkle holy water on your fireworks, my fellow Catholic Americans, but it’s obvious that some among us need to be shaken from our patriotic fervor so as to return to, or to obtain, a worldview that is consistent with our Faith.

From the Encyclical, Longiqua of Pope Leo XIII, written in 1895:

For the Church amongst you, unopposed by the Constitution and government of your nation, fettered by no hostile legislation, protected against violence by the common laws and the impartiality of the tribunals, is free to live and act without hindrance. Yet, though all this is true, it would be very erroneous to draw the conclusion that in America is to be sought the type of the most desirable status of the Church, or that it would be universally lawful or expedient for State and Church to be, as in America, dissevered and divorced. The fact that Catholicity with you is in good condition, nay, is even enjoying a prosperous growth, is by all means to be attributed to the fecundity with which God has endowed His Church, in virtue of which unless men or circumstances interfere, she spontaneously expands and propagates herself; but she would bring forth more abundant fruits if, in addition to liberty, she enjoyed the favor of the laws and the patronage of the public authority.

As for what constitutes “the most desirable status of the Church” in a given State, this same Holy Father offered ten years earlier, Immortale Dei.

So… as we, Catholic Americans (in that order) pray with increased fervor today, “God Bless America,” let us do so fully aware that the greatest blessing He can grant is a State ordered in service to His Son, Christ the King.