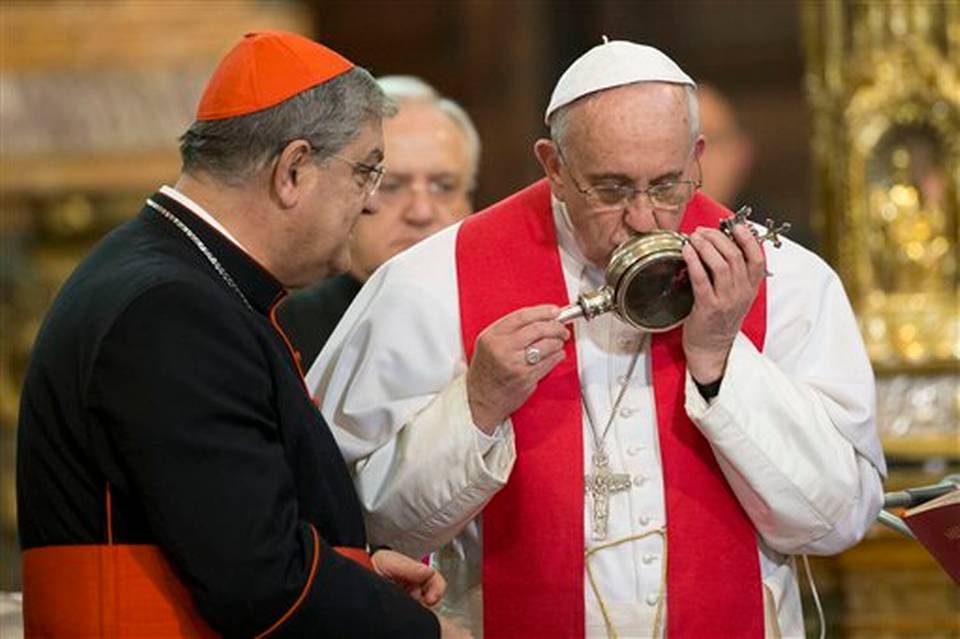 I’m sure you’ve seen the headlines…

A far more accurate headline, however, would read:

There has been no small amount of handwringing among some traditionalists (aka Catholics) over the events that took place at the Cathedral in Naples on Saturday.

(Though some questions remain concerning exactly when the blood of San Gennaro liquefied, the story is well known enough that I needn’t repeat it in its entirety here.)

According to Vatican Insider, when Cardinal Crescenzo Sepe, the Archbishop of Naples, noticed what had happened, he exclaimed, “It is the sign that St. Gennaro loves Pope Francis: half of the blood turned to liquid!”

So, what are we to make of this story?

Look, none of us knows for certain what happened in that Cathedral, much less why it happened, but there are some things about which there simply is no room for doubt.

First and foremost, we can say without any hesitation whatsoever, of course San Gennaro loves Pope Francis!

In other words, San Gennaro, whose will is perfectly united with the will of the Almighty, desires that Pope Francis undergo a profound conversion.

The Patron Saint of Naples, just like most of the readers here, deeply desires that Pope Francis should cease denigrating faithful Catholics simply for embracing immutable doctrine, loving the Mass of Ages, and having babies.

Pope Francis, for his part, responded by saying:

If only half of it liquefied that means we still have work to do; we have to do better. We have only half of the saint’s love.

I can appreciate the attempt at humour, but let’s not kid ourselves.

When Pope Francis says “we have to do better,” all indications are that he means to say, “We have to redouble our efforts to fight youth unemployment, put an end to global warming, value same sex attraction, and welcome those in adulterous relationships to Holy Communion apart from any real remedy!”

So, long story short, you won’t find me wringing my hands over the events of last Saturday, and neither should you.

We know what our Holy Catholic faith teaches. We know when it is under attack. Nothing has changed.

At least not yet.

Liturgical Devastation: Is it due to Vatican II?