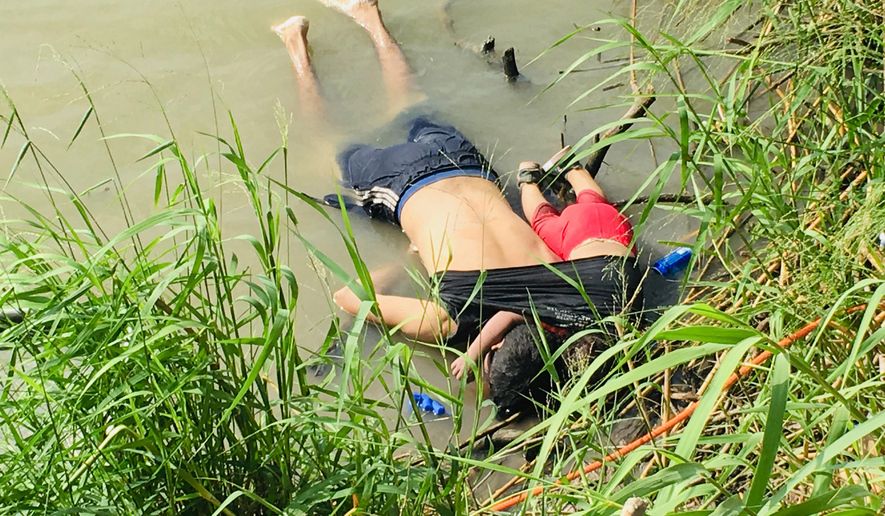 The photograph above, taken by Mexican photo-journalist, Julia Le Duc, showing the bodies of a father and daughter who lost their lives in a failed attempt to enter the U.S. illegally, has gone viral.

Ever since, commentators on both the left and the right have been trying to outdo one another in expressing empathy, while simultaneously pointing the finger of blame at their political opponents.

Fair enough. Two human beings have died a tragic death, and one side shares more blame than the other. Even so, what no one in the media seems willing to utter aloud, perhaps for fear of appearing heartless, are the following common sense observations:

– The story as reported doesn’t add up.

– The man in that photo is no victim.

– The photograph appears to have been staged.

According to multiple reports (e.g., BBC, Washington Post, Guardian), Óscar Alberto Martínez Ramírez and his wife, Tania Vanessa Ávalos, entered Mexico from El Salvador two months ago with their small daughter, Valeria. On Sunday, Ramírez decided to swim across the Rio Grande River into Texas, taking the child with him while Ávalos waited on the Mexican shore.

He set her on the U.S. bank of the river and started back for his wife, Tania Vanessa Ávalos, but seeing him move away the girl threw herself into the waters. Martínez returned and was able to grab Valeria, but the current swept them both away.

The account was based on remarks by Ávalos to police at the scene — “amid tears” and “screams” — Le Duc told The Associated Press.

Details of the incident were confirmed Tuesday by a Tamaulipas government official who was not authorized to discuss the matter publicly and spoke on condition of anonymity, and by Martínez’s mother back in El Salvador, Rosa Ramírez, who spoke with her daughter-in-law by phone afterward.

First, one wonders why it was necessary for a Mexican official to speak on condition of anonymity about such a matter. This in itself raises a red flag.

The search for Martínez and his daughter was suspended Sunday due to darkness, and their bodies were discovered the next morning near Matamoros, Mexico, across from Brownsville, Texas, several hundred yards (meters) from where they had tried to cross and just a half-mile (1 kilometer) from an international bridge. 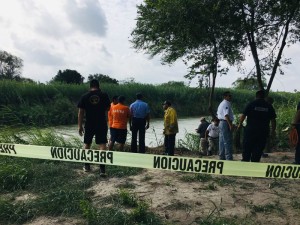 Note just how narrow the Rio Grande is in the area where the search took place.

Just several hundred yards? How is it that the bodies escaped the notice of the search party on Sunday?

Furthermore, if the current was so brutal as to sweep Ramírez and the child away in plain sight of the mother, surely it is reasonable to imagine that their bodies would have been taken further downstream over the course of some nine or so hours, no?

The Father as Victim

It must be said that Óscar Alberto Martínez Ramírez bears a tremendous amount of responsibility for Valeria’s death. It was his choice to place that child in grave jeopardy; evidently with her mother’s blessing.

That said, it must also be noted that the relentless assault on the southern border of the United States is not an entirely organic, grassroots movement. Rather, it is being fueled, encouraged and, in some cases, funded by leftwing agents of the diabolical – e.g., the Democrat Party in the U.S., George Soros and his assorted enterprises, and let us not forget Jorge Bergoglio (aka “Francis”) and his friends at the United Nations – each one Hell bent on effectively obliterating national sovereignty both here and abroad.

Everyone of these persons and entities are just as guilty as Ramírez for the death of little Valeria – the only real victim in this case.

As reported by the Washington Post, Rosa Ramírez, the mother of Óscar Ramírez, “spoke with her daughter-in-law by phone” after the incident and shared the following details with the Associated Press:

“When the girl jumped in is when he tried to reach her, but when he tried to grab the girl, he went in further … and he couldn’t get out,” Ramírez told AP. “He put her in his shirt, and I imagine he told himself, ‘I’ve come this far’ and decided to go with her.”

Isn’t just a bit too convenient that Mrs. Ramírez had a ready explanation for how the child ended up so neatly tucked under her son’s shirt as seen in the heart wrenching image?

What she didn’t tell the AP was how her son managed to get Valeria secured in this position in spite of the raging current that immediately swept him and his daughter away.

From the looks of the now-famous photograph, 25-year-old Óscar Ramírez appears to have been physically fit. The hydraulic force that eventually took his life, therefore, must have been appreciable. And yet, we are being asked to believe that little Valeria, presumably with the strength of an average two-year-old, somehow managed to keep her arm wrapped around Óscar’s neck throughout the harrowing ordeal, even to the point of death.

“I was drawn to the girl’s arm on her father,” said photographer Le Duc. Indeed, it is this touching feature of the photograph that makes it the money-shot that it is.

One notes, however, that none of the accounts of the incident as reported suggest that the bodies were discovered by Le Duc or any of the other photographers who, as fate would have it, were readily available at the scene to snap photos before the authorities in the search party could disturb them.

Now, I don’t claim to be well-versed in how Emergency Medical Technicians and police officers in Mexico do their jobs in such cases, but it would seem reasonable to me to expect them to rush to verify that the persons are actually dead immediately upon discovery, rather than leaving them undisturbed until after the media members on hand have a chance to snap some photos.

One thing is certain, however, Mexican government officials, who are under unprecedented pressure from the Trump Administration to stem the tide of illegal immigrants traversing their land en route to the U.S., have all the motivation they need to incite the world’s sympathy; with a little help, of course, from the anti-American media.

“It was something that moved me in the extreme because it reflects that until her last breath, she was joined to him not only by the shirt but also in that embrace in which they passed together into death,” Le Duc said with no small flair for the dramatic, as if to make certain that the full impact of the image wouldn’t be lost on those who might otherwise fail to interpret it correctly.

“Will it change anything? It should!” said Le Duc, who did little to hide her own ideology while also revealing the media’s primary goal. [HINT: It has nothing whatsoever to do with reporting the news.]

“These families have nothing, and they are risking everything for a better life. If scenes like this don’t make us think again — if they don’t move our decision-makers — then our society is in a bad way,” she said, sounding far more like a liberal American Democrat than a Mexican journalist.

Amazing, isn’t it, that Le Duc just happened to be the photographer who found herself in the right place at the right time that fateful day?

About that place and time…

Evidently, a young man and a small child drowned in an attempt to enter the Unites States illegally. This is about as far as anyone can go with any degree of confidence. Beyond that, all bets are off.

My suspicion? I wouldn’t be the least bit surprised if the bodies were recovered much earlier than reported, perhaps even before dusk on Sunday; only to be positioned for a photo-op in the full light of day on the following morning, thus setting the stage, literally, for an image that would have maximum public relations benefit for the godless left.

If this be so, one may wonder why the orchestrators of this ruse would go so far as to place the child’s body securely inside of Ramírez’s shirt; in spite of how improbable this is in light of the story being told of an irresistible current. The answer is simple:

You see, apart from this, one would most certainly surmise that Óscar and Valeria lost their grip on one another during the ordeal. As such, their bodies would reasonably be expected to wash ashore in two different places. In my estimation based on all that has been reported, it is far more likely that this is exactly what happened.

But let us not forget who we’re dealing with here – hate-filled, leftwing, diabolical liberals, who are cunning enough to know that two separate images, of two separate bodies, in two separate locations, would hardly have the emotional impact of the one that was produced; the latter being far more Tweet-worthy, and thus far more likely to go viral.

Don’t think it’s possible that anyone could be so cold and calculating?

Might I remind you that these are the same sort of people who cheer laws allowing the wanton murder of newborns, jam as much LGBT gender-bending evil as possible down the throats of our innocent children, and, in the present case, are more than willing to turn a blind eye to the human trafficking that takes place via illegal immigration; the victims of which, including minors, all-too-often end up enslaved in the sex trade.

A few little white lies and a well-staged photograph of a couple of repositioned corpses dutifully spread by their partners in the mainstream media?

Sounds like just another day at the office for the compassionate left to me.

A note from John Vennari