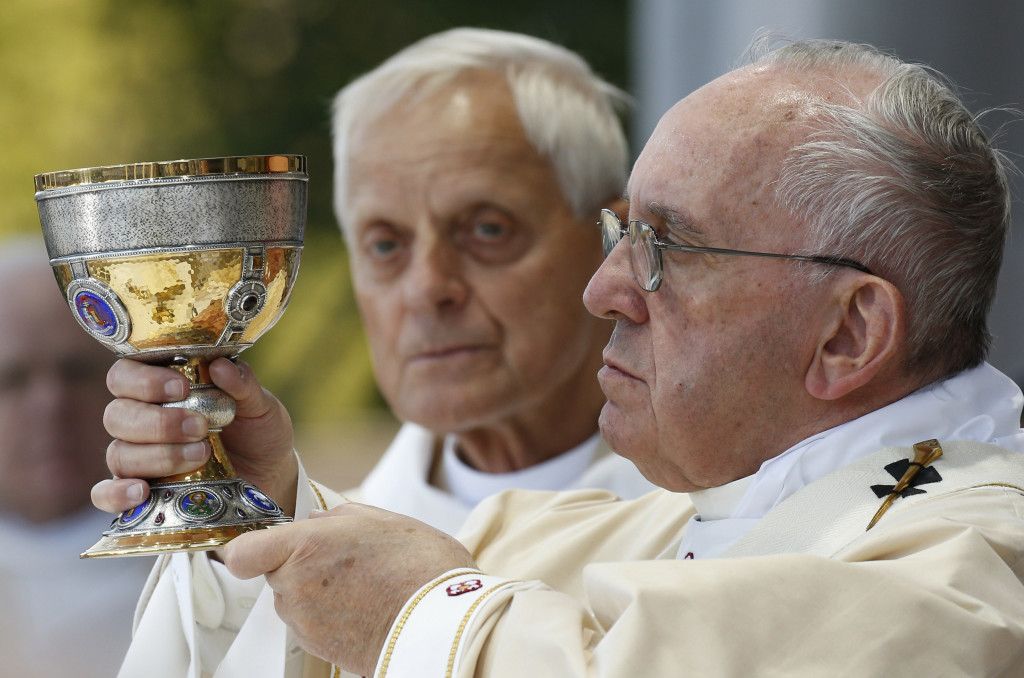 Many Catholic commentators – no small number being so-called “conservatives” – have expressed outrage over reports that Jorge Bergoglio, CEO of Conciliar Church, Inc., is moving to change the Lord’s Prayer from “lead us not into temptation” to “do not let us fall into temptation” in the Third Edition of the Roman Missal [sic] in Italian (non abbandonarci alla tentazione, more literally, “do not abandon us to temptation”).

Fair enough, there are many reasons to find the Chief Error Officer’s actions in the matter objectionable; not the least of which is the fact that it shows utter contempt for Catholic tradition, Sacred Scripture, and what’s more, the very words of Our Lord. (Though, let’s not feign shock as this has been his modus operandi since day one.)

That said, what has not been given nearly enough attention in these same circles are reports that Bergoglio also plans to retain the erroneous translation per tutti (meaning, “for all”) of the Latin pro multis in the updated Italian Missal in the words of consecration.

In 2006, the Holy See under Benedict XVI instructed that “for many” is to be used in the vernacular translations of pro multis.

The first reading expresses a powerful hope in the resurrection of the just: “Many of those who sleep in the dust of the earth shall awake, some to everlasting life, and some to shame and everlasting contempt” (Dan 12:2)  …  The “many” who will rise for eternal life are to be understood as the “many” for whom the blood of Christ was shed.  They are the multitude that, thanks to the goodness and mercy of God, can experience the life that does not pass away, the complete victory over death brought by the resurrection.

These comments were taken by some as an indication that Francis was of one mind with Benedict on the matter, but if what is being reported is true (and there is good reason to believe that this is the case), one might well wonder what’s going on.

Is it simply a matter of bowing to the wishes of the Italian Bishops Conference, or is he answering to a higher authority? [HINT: It isn’t Almighty God.]

The Italian edition isn’t going to be published and made available for several months, finally putting to rest speculation on the pro multis translation that will be used. What deserves our utmost scrutiny today, nonetheless, is the fact that “for all” was ever approved by Rome, for use in any place, at any time, in any language.

The use of “for all” instead of “for many” and the effect this may have on the validity of the rite itself has long been a subject of intense debate.

It seems to me that Fr. Greogory Hesse summed it up best, when in light of reasonable doubts concerning whether or not the use of “for many” renders the consecration of the Precious Blood invalid, thereby meaning that the rite in which this took place was not truly the Mass, he said:

I have come to the conclusion that the Mass in the vernacular [when “for all” is used] is invalid, however, I cannot give you scientifically irrefutable proof for what I say. Neither could you altogether give me scientifically irrefutable proof that the new Mass in the vernacular is valid. Therefore, we face certainty on doubt.We have the proof that the new Mass is doubtful and that’s why we are not allowed to go to the new Mass. Blessed Innocent XI condemned the following sentence: “For pastoral reasons you may approach sacraments according to the probability as to its validity.”

In other words, it does not matter which side of the argument one favors in this debate; the point is that reasonable doubt among people of good will obviously exists.

Some Novus Ordo attending readers may feel compelled to say, Oh, but this doesn’t pertain to me. My vernacular edition reads ‘for many.’  Others, who wouldn’t be caught dead at a Novus Ordo, might also believe that this matter is of little personal import, but both would be very much mistaken.

The real issue (one that all “conservatives” and “traditionalists” of good will should be able to agree upon) concerns the undeniable fact that a doubtful Mass with doubtful Sacraments vis-à-vis the Novus Ordo was ever instituted in the first place.

Unless one is sinfully complacent – that is, exhibiting as an act of the will the lukewarmness that Our Lord explicitly condemned – a faithful Catholic simply must prayerfully ponder the following questions and implications; both for one’s own good and for the good of others.

So, from where did this doubtful rite come?

This naturally leads to more questions:

Would a real “Saint” inflict such a rite upon the entire Church? For that matter, would any churchman be able do so and still maintain his membership in the Church?

The Council of Trent has this to say:

If any one saith, that the received and approved rites of the Catholic Church, wont to be used in the solemn [Page 56] administration of the sacraments, may be contemned, or without sin be omitted at pleasure by the ministers, or be changed, by every pastor of the churches, into other new ones;let him be anathema. (Council of Trent, Session VII, Canon XIII) [Emphasis added]

Even if one wishes to insist that the so-called Mass of Paul VI is in some sense defensible, there can be no denying that relative to the abovementioned received and approved rites of the Catholic Church it is an “other” and a “new” rite. In fact, the very phrase “Novus Ordo Missae” (New Order of Mass) was given to the rite by Paul VI himself.

Would not promulgating such a rite have rendered Giovanni Battista Montini anathema according to the Council of Trent?

After all, the Fathers of Trent explicitly placed this condemnation upon every pastor, without exception, who would even just say that the Mass could be changed or made new. Paul VI did something far more egregious than this!

Now, I do realize that simply by posing these reasonable questions and offering the common sense observations that naturally follow will be enough to incite many readers to promptly hit DELETE rather than engage their intellect in search of the truth, which is precisely the purpose of this exercise.

In any case, for those who are still with us, I’d like to take the focus off of the pope and place it on the Church.

Can we really say that the Novus Ordo Missae itself is a “received and approved rite of the Catholic Church”?

In other words, did Holy Mother Church herself  promulgate a rite of doubtful validity, and worse still, one that contains grave theological error in the official text of the Missal itself, and not simply via translation errors?

The answer to this question is obvious. But if the Novus Ordo – with its doubtfulness and its errors – did not come to us from Mother Church; then from what and from whom did it come? Again, the answers would seem obvious.

The only real question for most individual readers to answer is for themselves:

Am I willing to apply my intellect to this terrible reality, or am I too afaid of what I might discover?

Let’s get ready to HUMBLE!