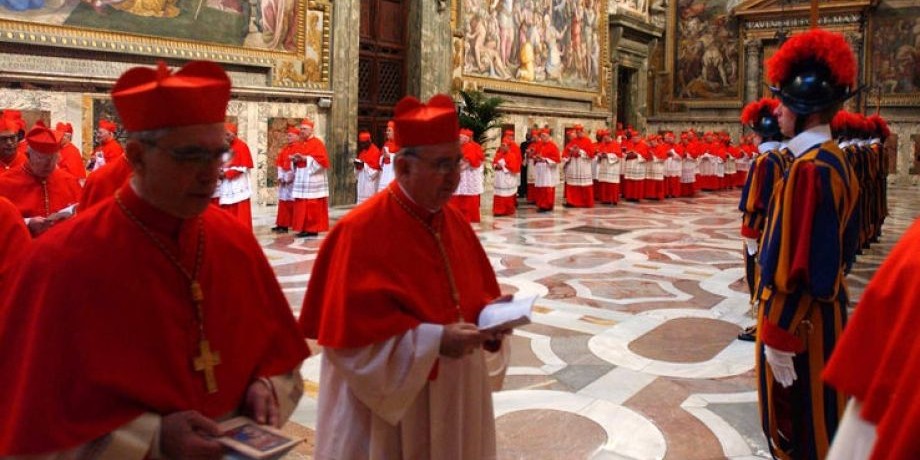 On 25 May, the Remnant – America’s oldest traditional Catholic newspaper – published a plea calling on the College of Cardinals to remove Francis from office.

I have to admit, when a kind reader called my attention to this fact (along with a link and very little in the way of detail), I was genuinely surprised and cautiously encouraged.

I wondered, was the Remnant taking a stand similar to the one long ago taken here?

Has Michael Matt finally concluded the obvious; namely, that Jorge Mario Bergoglio has – after numerous admonishments from theologians, priests, bishops, and cardinals – plainly condemned himself by his notorious heresy and must therefore be to us as a heathen and publican? (cf Titus 3, Matthew 18)

Is the Remnant now joining us in calling on the College of Cardinals to make a formal declaration of this fact for the good of souls, etc.?

If so, it would be a pleasant surprise indeed.

After all, as far as I’m aware, Mr. Matt’s public position on the Bergoglian occupation of Rome hasn’t really changed since he said back in October:

Even in Amoris:  Which dogma has Francis officially and unequivocally denied? Name one! You see the problem? One cannot be a public and pertinacious heretic by default, weakness, innuendo or ambiguity.

Well, after having read the article in question, I now realize that by publishing this call for the cardinals to remove Francis, the Remnant has drifted even further away still, not just from me, but from Catholic tradition itself.

The author of the article, Elizabeth Yore, “a child advocate attorney who has investigated clergy sex abuse cases,” details Bergoglio’s mishandling of the Chilean sex abuse scandal involving Bishop Juan Barros and his close association with convicted abuser Fr. Fernando Karadima. (A story that I treated in a post HERE)

Mrs. Yore does an admirable job of making the case that Francis is guilty of leading what amounts to a cover-up that served to protect, not the sheep, but the predator.

The “money quote” and portion of the article under discussion here reads:

The College of Cardinals should immediately convene and remove Francis, the Bishop of Rome for his gross and grave negligence and personal complicity in the systematic flouting and abuse of his own zero tolerance policy causing a scandal of epic proportions brought upon the global Catholic Church and the Chilean Catholic Church. In Francis’ new Motu Proprio Guidelines on Bishop Removal the standard for removal is “In the case of the abuse of minors and vulnerable adults it is enough that the lack of diligence be grave.” § 3. Three years of papal stonewalling and coverup is the definition of grave.

It is easily arguable that the Francis coverup timeline demonstrates overwhelming evidence of a pernicious and wanton breach of ecclesiastic duty to ensure the protection of children and the moral integrity of the episcopacy. For once, will the Princes of the Church protect the little children? Or will they continue to quake in their mitres in the face of the dictator Pope?

For most readers of this space (and one would hope most readers of the Remnant as well) the reason why a call such as this should never have found its way into the pages of any Catholic publication – “traditional” or otherwise – is obvious:

In publishing this passionate plea, the Remnant is leading the naïve to believe that a reigning Roman Pontiff (if you will allow) is somehow subject to the Church’s policies (in this case, Article 1 § 3 of “Francis’ new Motu Proprio Guidelines on Bishop Removal”), and furthermore, that the College of Cardinals has juridical authority over him.

This notion is so irreconcilable with authentic Catholic tradition that one would be shocked to find it published by any one of the many neo-conservative outlets, much less America’s oldest… (you know the rest).

Mrs. Yore is a well-intended advocate whose sincere concern for the victims of abuse is unquestioned, and yet, had she done her homework (never mind the publisher doing his) she would have seized upon the following from the very motu proprio that she cited in her article:

The decision of the Congregation [to remove, or not, a bishop from office] as stated in articles 3–4 must be submitted for the specific approval of the Roman Pontiff… (see Come una madre amorevole – Article 5)

In other words, the “zero tolerance policy” that Mrs. Yore cites for allowing the cardinals to remove Francis has no teeth apart from the Roman Pontiff!

Be that as it may, it is necessary for the sake of clarity to say that no one – not even the entire College of Cardinals – can judge, rule over, much less remove, a reigning pope.

While most akaCatholic readers understand this perfectly well, I can tell you that some do not; i.e., there is good reason to fear that many will fall prey to this erroneous manner of thinking, especially given the presumed credibility of the source.

I have literally witnessed otherwise solid Catholics on my social media feed sharing Mrs. Yore’s article, along with commentary suggesting that the Remnant should be praised for taking such a bold stand.

It also perfectly illustrates why Cornelia Ferreira, in a recent post on this blog, called for A New Voice for Truth:

“It is now obvious that formerly traditional papers have lost their vigor,” she wrote, and so a publication like The Catholic Inquisitor is much needed in order to fill the “void in the propagation of Catholic Truth.”

And the Banquet Bishop roared…

A word about comments