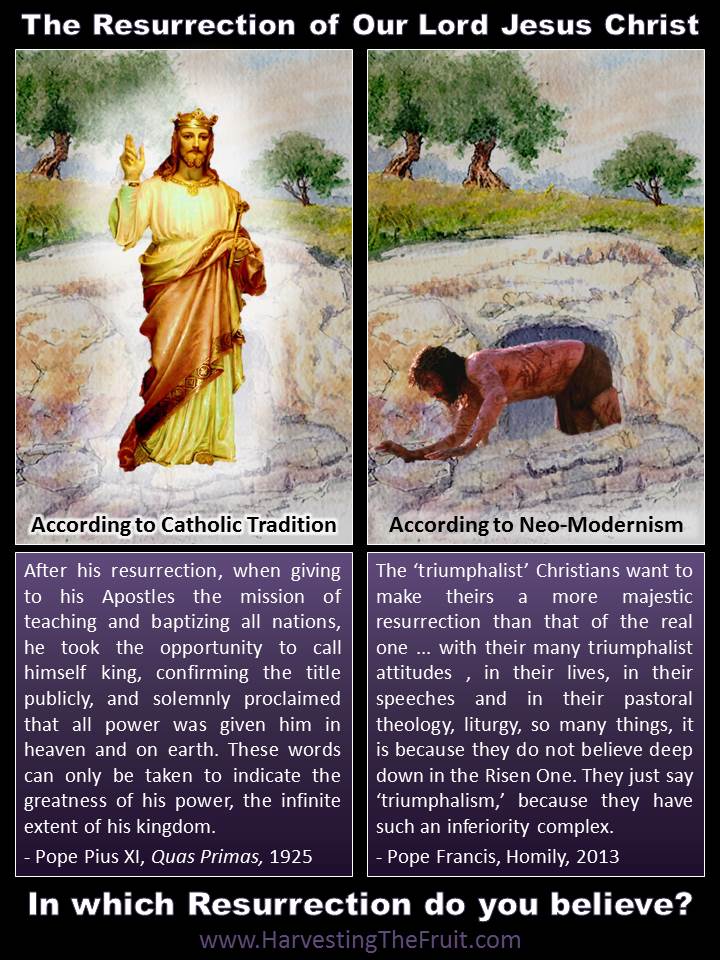 If nothing else, Pope Francis is consistent.

Well, in any number of ways, but today I have in mind his near-singular focus on the things of this world, his remarkable disdain for the Church’s teaching office, and his habitual pitting of doctrine against authentic Christianity.

In his Wednesday Audience held earlier today, His Holiness managed to package all three in one.

From here, Pope Francis effectively goes on to redefine “teaching” as little more than setting a good example as opposed to providing instruction.

“And so the Church acts like Jesus. She does not give lectures on love, on mercy. She does not spread a philosophy, a path of wisdom throughout the world. Of course, Christianity is all this, but as a consequence, in reflection. The Mother Church, like Jesus, teaches by example, and uses words to illuminate the meaning of her gestures.”

The doublespeak in this paragraph is much more than just a momentary detour into rhetorical sloppiness; rather, it’s the ethos of Pope Francis through and through.

A quick spin through Evangelii Gaudium alone is enough to discover just how much this pope wishes to make of doctrine the enemy of true Christianity.

Pastoral ministry in a missionary style is not obsessed with the disjointed transmission of a multitude of doctrines to be insistently imposed … A supposed soundness of doctrine or discipline leads instead to a narcissistic and authoritarian elitism … In some people we see an ostentatious preoccupation for the liturgy, for doctrine and for the Church’s prestige … [sound catechesis] will not reduce preaching to a few doctrines which are at times more philosophical than evangelical …   (cf Evangelii Gaudium)

Returning to the excerpt from today’s audience, of course the Church uses words to explain the meaning of her deeds, but notice the Holy Father’s outright contempt for a Church that imagines herself to be so grand as to “lecture” the ignorant, and to “spread a philosophy and a path of wisdom,” as if she is… oh, I don’t know… the bulwark of truth or something.

More disturbing still is the pope’s perhaps nastiest habit of all; namely, redefining Jesus Christ Himself.

Every literate Christian who has ever cracked the cover of a Bible knows very well that Our Blessed Lord gave numerous lectures on love and mercy. His public ministry was very much dedicated to spreading a philosophy and illuminating the path of wisdom such that all generations throughout the world may know the way of eternal salvation.

One cannot help but ask, who exactly is the Jesus of Pope Francis?

As I’ve observed in the past, it’s the itinerant Jesus, the servant and doer of good deeds who is destined to be beaten and bloodied by the powers of the world, but it’s most certainly not Christ the King who reigns triumphant.

In today’s audience, we really didn’t learn anything new; we simply received more evidence still of the deep disconnect that exists between the Jesus of the current pope’s mind and the Jesus of the Gospels.

In any event, with the irony apparently lost on the Bishop of Rome, Pope Francis continued his own rather lengthy lecture on mercy by focusing squarely on the “corporal works.”

We will have to wait until next week to find out if he plans to continue his “catechesis” (such as it is) by expounding upon the “spiritual works,” but given that they include such unsavory activities as “instructing the ignorant; counseling the doubtful, and admonishing sinners,” each of which comes dangerously close to that most dreaded activity of all, proselytism, I tend to doubt it.

Bring back the Oath Again Modernism