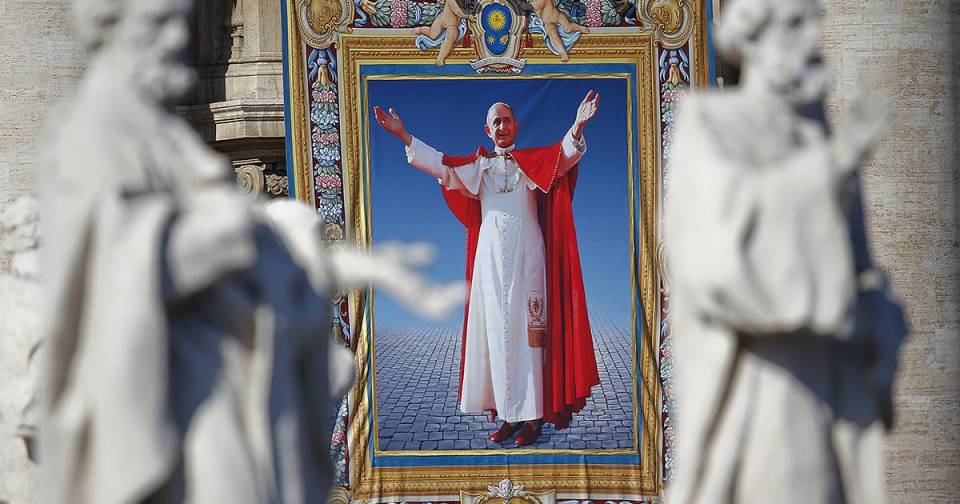 On October 13, the Society of Saint Pius X issued a communiqué on the utterly ersatz “canonization” of Pope Paul VI that was scheduled to take place (and did) on the following day in Rome. It is a most unfortunate text; indeed, nothing less than a massive failure.

The communiqué opens with the following:

These beatifications and canonisations of recent popes, with an accelerated procedure, dispense with the wisdom of the Church’s centuries-old rules. Is not their aim more to canonise the popes of the Second Vatican Council, rather than to note the heroicity of their theological virtues? When one knows that the first duty of a pope – successor of Peter – is to confirm his brethren in the faith (St Luke 22:32), there is a good reason to be perplexed.

This is exactly backwards. It is far more accurate to say: When one is steeped in Catholic tradition, there is no reason to be perplexed by these events. We know exactly what is going on – Rome has lost the faith!

I, for one, am sick to death of seeing would-be defenders of tradition play the “confusion” card in the face of what are obvious assaults against the true Faith.

Please, this is no time for cute rhetorical questions. We know damned well what their aim is, and that knowledge should inspire righteous outrage on the part of every Soldier for Christ and nothing less. Even so, the communiqué’s tone is disgustingly diplomatic; it is an overt attempt to come off as fair and balanced, to what end, is anyone’s guess.

After tiptoeing through the tulips in the opening paragraph, the text (signed only “Menzingen, October 13th, 2018”) goes on to carefully list Paul VI’s supposed accomplishments. Only then does it mention certain of his magnificent faults, which I see no need to applaud given what I am about to highlight.

It is true that Paul VI was responsible for the encyclical Humanae Vitae (July 25th, 1968), which instructed and consoled Catholic families at a time when the most basic principles of marriage were under bitter attack.

No, it is not true that Humanae Vitae consoled Catholic families. In fact, the text undermines the “most basic principles of marriage;” namely, its primary and secondary ends. This document has had a disastrous effect on Catholic families! (See HERE)

[I would be interested in hearing from those of you who attended the Angelus Conference this weekend. Specifically, I’d like to hear how Humanae Vitae was presented there: Was it applauded as in the above, or was it condemned as an attack against marriage as it should have been? One would hope the latter, but if so, why go soft in a communiqué read by faithful all over the world?]

It gets worse… The communiqué goes on to say:

He [Paul VI] was also the author of the Credo of the People of God (June 30th, 1968) by which he wanted to emphasise the articles of Catholic faith challenged by the progressivism ambient, in particular in the scandalous Dutch Catechism (1966).

Nonsense! The so-called Credo of the People of God is a prime example of the progressivism ambient!

Let’s take a look at just some of what this supposed emphasis of the articles of the Catholic faith actually says.  Paul VI prefaces the text stating in part:

We shall accordingly make a profession of faith, pronounce a creed which, without being strictly speaking a dogmatic definition, repeats in substance, with some developments called for by the spiritual condition of our time, the creed of Nicea, the creed of the immortal tradition of the holy Church of God. [Emphasis added]

Needless to say, those “developments” are of the conciliar kind; that is, the kind vigorously opposed by Archbishop Lefebvre and the Priestly Society that he established; at least at one time.

Paul VI went on to say:

We have wished our profession of faith to be to a high degree complete and explicit, in order that it may respond in a fitting way to the need of light felt by so many faithful souls, and by all those in the world, to whatever spiritual family they belong, who are in search of the Truth. [Emphasis added]

In this, we see a tip of the papal mitre to the false religions of the world; one of the rottenest fruits of the Council and one that reappears in the text as Paul VI states:

We give thanks, however, to the divine goodness that very many believers can testify with us before men to the unity of God, even though they know not the mystery of the most holy Trinity.

This is nothing less than a show of deference to those who plainly reject Jesus Christ; in particular, the Muslims and the Jews. Here, Paul VI is echoing the sentiments expressed in the conciliar document, Nostra Aetate.

And this is what the recent SSPX communiqué considers an example of Paul VI emphasizing the articles of Catholic faith?

Under Pontius Pilate He suffered—the Lamb of God bearing on Himself the sins of the world, and He died for us on the cross, saving us by His redeeming blood.

Sounds good, right? Wrong. Note the convolution between redemption and salvation; one that is well in keeping with the Protestant error that considers Christians “once saved, always saved.” Inadvertent? Hardly.

And then there’s the Credo’s twisted ecclesiology.

So much for the Church Militant, the Church Suffering and the Church Triumphant. Furthermore, the Catholic Church is not merely the “germ” of the Kingdom of God; i.e., that which is evolving into said Kingdom.

Contrast Montini’s profession with the words of Pope Pius XI who spoke of “the Catholic Church, which is the Kingdom of Christ on earth.” (cf QuasPrimas) Paul VI dared not reiterate this article of Catholic faith, however, well… because… ecumenism.

He continues with the Church as “germ” theme, stating:

No, not just “begun here,” but rather, is here.  This, of course, is the same Paul VI who affirmed his conciliar confreres in declaring that the Church of Christ merely subsists in the Catholic Church. (LG 8) As such, it comes as no surprise that the ecclesiology presented in his Credo is empty.

This brings us to Paul VI’s treatment of the Mass, and it’s just as one might expect. Of particular note are his words concerning the priest and his actions as carried out within the Mass.

We believe that the Mass, celebrated by the priest representing the person of Christ by virtue of the power received through the Sacrament of Orders, and offered by him in the name of Christ and the members of His Mystical Body, is the sacrifice of Calvary rendered sacramentally present on our altars.

No, the priest does not simply represent the person of Christ at Holy Mass; rather, he acts in persona Christi in so profound a way that it is Christ Himself who offers the Holy Sacrifice, which is not merely offered by the priest “in the name of Christ” as the Credo maintains.

Much less is the Holy Sacrifice offered in the name of the members of His Mystical Body, but rather is it offered for the members of the Church as a propitiation:

Be mindful, O Lord, of Thy servants and handmaids N. and N., and of all here present, whose faith and devotion are known unto Thee, for whom we offer, or who offer to Thee, this sacrifice of praise for themselves, and for all their own, for the redemption of their souls…

There is more to be found in the Credo of Paul VI that renders the text condemnable, but at this I will assume the point has been well made:

God forbid a sincere seeker of truth, disturbed by the “canonization” of Paul VI, should come to the Society’s website looking for answers. By highlighting Humanae Vitae and the Credo of the People of God in a positive light, the SSPX has failed the faithful miserably.

Let us pray that the Society of St. Pius X will soon regain its vigor.