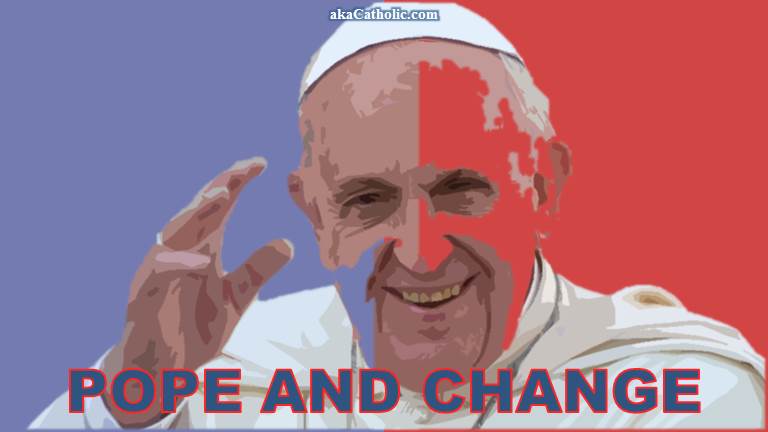 According to Vatican Radio, on Monday, January 18, 2016, the day after Pope Francis’ visit to the Great Synagogue of Rome, the pontiff delivered a homily at his daily Mass in which he condemned Christians who are of “closed heart” and resisters to “change,” calling them “obstinate rebels” and “idolaters.”

Stopping short of excommunicating Christians “who obstinately cling to what has always been done and who do not allow others to change,” it was not until the last paragraph of his talk in the pew-less, kneeler-less chapel of the Domus Sanctae Marthae, that Francis attempted to make a distinction between what “should not change because it is fundamental,” and “what should change in order to be able to receive the newness of the Spirit (italics added).”

Now, Catholicism is a religion of Tradition, Sacred Scripture and the Magisterium, the fullness of the Faith, handed down to us from the time of the Apostles. It never was, is, or will be a religion of “evolution” or “change” related to dogmatic truths and morals. Yet, Francis continues to maintain an inordinate fascination with “change,” which amounts to a “divinization” of change. As Shakespeare’s Hamlet would say, “Ay, there’s the rub!”

The Role of Change in the New World Order

We know that the sine qua non of the so-called New World Order is CHANGE. How do we know this? To answer this question requires an extended explanation, which, for some readers may come as a new and instructive revelation.

The disclosure of this specific revelation occurred on the evening of March 20, 1969. The place was down-town Pittsburgh, Pennsylvania at the upscale LeMont Restaurant atop Mount Washington. The event was the annual meeting of the Pittsburgh Pediatric Society. The guest speaker was Dr. Richard Day, Professor of Pediatrics at Mount Sinai Medical School in New York, and the former National Medical Director of the Planned Parenthood Federation of America in New York City.

Although the physicians in attendance expected to hear a lecture on advances in neo-natal care, the title of Day’s lengthy speech as it appeared on the printed program was “Family Planning: Infant Mortality, Gene Frequency, Abortion and Other Considerations.”

The date of Day’s talk is extremely significant.

Only nine days before, Frederick S. Jaffe, Vice-president of Planned Parenthood-World Population had sent Bernard Berelson, President of Rockefeller’s Population Council, a memorandum titled “Activities Relevant to the Study of Population Policy for the U.S.”

Among the examples of proposed measures to reduce U.S. fertility found in Table 1 of the infamous memorandum were:

Dr. Day would cover all these topics and much more on that March night, but his introduction was reserved for general themes characteristic of the New World System (Order) which he said was already in place, “and nobody can stop us now.”

The use of the word “us” clearly indicates Day saw himself as an Insider of the NWO.

The first of these overall themes centered upon the importance of CHANGE at all levels of Society in the New World System. Not simply minor societal or technical or personal changes, but major, earthshaking changes as well as change simply for the sake of change.

“People will have to get used to the idea of change. So used to change, that they’ll be expecting change. Nothing will be permanent,” Day explained (emphasis added).

Change was put into the context of a population which has no traditions, no roots or moorings and therefore would anticipate, expect, and accept change, no questions asked, because it was all the people had ever known.

In connection with specific changes related to laws and customs, Day explained that under the NWO, “Everything has two purposes. One is the ostensible purpose which will make it (change) acceptable to the people and second is the real purpose which would further the goals of establishing the new system and having it.”

Under the rubric “Sex without reproduction and reproduction without sex,” Day forecasted with 100% accuracy, four years before Roe vs. Wade, that abortion would be legalized and funded with tax dollars.

Regarding homosexuality, Day explained that “People will be given permission to be homosexual. They won’t have to hide it.”

Regarding euthanasia, Day talked of the “demise pill” to reduce the burden of an aging population.

As to the role of religion in the New World System, Day, an avowed atheist, stated that the major religions of today are not compatible with the changes to come, therefore they “will have to go, especially Christianity.”

According to Day, “Once the Roman Catholic Church is brought down, the rest of Christianity will follow easily. Then a new religion can be accepted for use all over the world. It will incorporate something from all of the old ones to make it easy for people to accept it, and feel at home in it. Most people won’t be too concerned with religion. They will realize that they don’t need it.”

Regarding the Bible, Day stated that it would be changed and rewritten to fit the new religion. This would be accomplished by replacing key words “with words having various shades of meaning. The idea is that not everything in Scripture need be rewritten, just key words replaced by other words. And the variability in meaning attached to any word can be used as a tool to change the entire meaning of Scripture, and therefore make it acceptable to this new religion. Most people won’t know the difference… and the few who do notice the difference won’t be enough to matter.”

Is Pope Francis Preparing Catholics for Entry into the NWO?

This is a question I find me asking myself with ever greater frequency in the secret recesses of my heart and my mind. Given his sad performance to date as the Vicar of Christ, I would have to answer, yes.

When I read Francis’ condemnation of those who resist change, the words of Dr. Richard Day on the role of change in the NWO came flooding back into my thoughts. No doubt it is time to ask this question publicly. How would you answer?