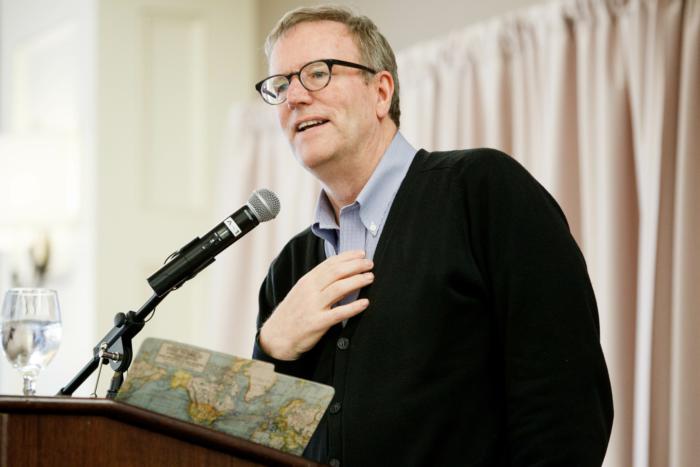 Robert Barron, to my mind, is the quintessential poster boy for the so-called “New Evangelization.” He has all the right qualifications:

He is a camera-ready media creation with practically nothing of substance to offer beyond sugar-coated platitudes packaged in Catholic language. He is an ecumenist who is well-versed in the craft of religious diplomacy. He is an erudite apologist, not for the Faith that comes to us from the Apostles, but rather, and almost exclusively, for the Crap that comes to us from the Council. He is an Ultramontanist papal fanboy; ever at the ready to cheer the pope’s every last word and deed no matter how outrageous they may be. And, just as an added bonus, as of last September, he’s now commonly addressed as “His Excellency.”

In his latest Zenit article, Barron writes in support of the Bergoglian Occupation:

The whole Christian world has watched with fascination as Pope Francis, over the past several months, has reached out to evangelicals. Who can forget the mesmerizing iPhone video, filmed by the Pope’s (late) friend Bishop Tony Palmer … What I found particularly moving was the remarkable reaction of the evangelical audience after they had taken in the video: a real prayer in the Spirit.

Correction: The authentic Christian world, aka Catholic world, isn’t gazing upon this pontificate with anything other than sheer horror.

That said, I concur on at least one point. Who can forget that infamous iPhone video, indeed? This is the same video wherein Pope Francis addressed the make-believe cleric Tony Palmer as his “brother bishop.”

At the time, this upset me. In hindsight, however, I am struck by just how fitting these words truly were given that Francis behaves far more like a protestant layman pretending to be a bishop than an actual Apostle.

So does Robert Barron.

Take a look at the “remarkable reaction of the evangelical audience” that he considers “a real prayer in the Spirit.” 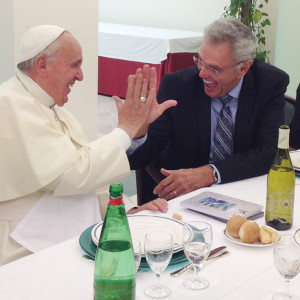 As if he hasn’t embarrassed himself quite enough, Bishop Bobby gushes:

And who could forget the high-five – reportedly the first of Pope Francis’s life – exchanged with Pastor James Robison, after the Pope insisted that a living relationship with Jesus stands at the heart of the Christian reality?

This is just pathetic. Barron should just trade-in his bishopy business suit (as well as his cardigan and button down) for a cheerleading skirt and be done with it.

The cheering, however, has only just begun. He goes on:

Many Catholics were surprised when the newly-elected Pope Francis asked the crowd gathered in St. Peter’s Square to pray for him, but evangelicals from Argentina weren’t taken aback, for they had witnessed something very similar. In June of 2006, Cardinal Jorge Mario Bergoglio was attending a meeting of evangelical pastors in Buenos Aires, and after he had spoken to them, he knelt down on the stage and asked them to pray for him and to bless him. 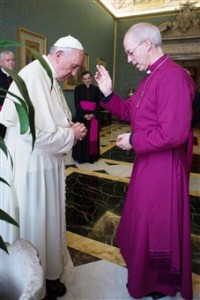 Is there anything Jorge Bergoglio has ever done over which Bobby Barron isn’t willing to fawn like a teenaged girl at a Justin Bieber concert?

Obviously not. He probably thought it was even groovier still when Francis bowed his head for Justin Welby’s blessing.

Having cheered his little heart out for “fascinating” Francis, Barron wades into deeper waters:

“But does his outreach to evangelicals go beyond the merely symbolic? Is it grounded in more substantial theological commitments? I would argue the affirmative and to do so on the basis of Francis’s Apostolic Exhortation Evangelii Gaudium (The Joy of the Gospel).

Well, we can at least give Barron credit for not pretending to base his examination of the current pontificate on Catholic theological commitments, but rather on the ravings recorded in Evangelii Gaudium – about which Cardinal Burke once hilariously stated:

To me, it’s a distinct kind of document, and I haven’t quite figured out in my mind exactly how to describe it. But I would not think that it was intended to be part of papal magisterium. At least that’s my impression of it.

In paragraph seven of Evangelii Gaudium, Francis says, “I never tire of repeating those words of Benedict XVI which take us to the very heart of the Gospel: ‘Being a Christian is not the result of an ethical choice or a lofty idea, but the encounter with an event, a person, which gives life a new horizon and a decisive direction.’”

There is much more in Barron’s article to turn the Catholic stomach, and invite you to read the rest of it there, especially if you are struggling to keep your New Year’s diet resolution. At this, I’m going to jump off so we can focus on the excerpt that Barron provided from Evangelii Gaudium.

In truth, being a Christian is not best described as the result of an “encounter” with Christ. Much less is it the fruit of an “encounter” with an event; not even an event as profound as the Resurrection. That which “gives life a new horizon and a decisive direction” is not simply the encounter, but rather Baptism, conversion and persistence in communion.

One need only spend five minutes in the Gospels to recognize that there were many who had an encounter with Our Blessed Lord, in the flesh, only to reject Him; their lives unchanged save for the condemnation they invited in doing so.

The first that come to mind, of course, are the Pharisees who demanded His death, but more can be discovered relevant to the present situation by considering the wealthy young man who asked of Jesus, “What good deed shall I do that I may have life everlasting?” (cf Matthew 19)

After insisting that he has kept the commandments since his youth, the young man let on that he knew in his heart that something was still missing as he asked further still, “What is yet wanting to me?”

At this, the Lord who commands us, “Be perfect as your heavenly Father is perfect” replied:

“If thou wilt be perfect, go sell what thou hast, and give to the poor, and thou shalt have treasure in heaven: and come, follow me.”

When the young man heard this, we are told, “he went away sad: for he had great possessions.”

In this, not only do we see that “encounter” alone doesn’t “give life a new horizon,” we also discover that the young man suffered from an error of presumption that is rather common in our day; he believed that if only he performed enough good deeds he would attain to life everlasting.

Our Lord, however, challenged the young man and his presumptions, telling him not only to “give to the poor,” but most importantly, to “come, follow me.”

The Faith that comes to us from the Apostles is crystal clear on this point:

It means dying with Him and rising with Him in the waters of Baptism, thus becoming members of His Mystical Body the Church – the Holy Catholic Church – where one does not merely “encounter” Christ, but rather enters into communion with Him, and it is here where we must persist, carrying our cross with Him, day in and day out, aided by the grace of the Sacraments unto the very finish.

While one might fairly give Benedict the benefit of any doubt in this respect, Francis is another story.

All indications are that the reason he “never tires of repeating” his predecessor’s words is because he is Hell bent on leveraging them in furtherance of his own gospel; one that supplants the mission given to the Church by Christ with a man-centered effort to create a “culture of encounter.”

The false gospel according to Francis suffers from the same defect of presumption that we find in the rich young man; it reduces the Christian life to little more than a scorecard of good deeds quite unrelated to the Catholic faith.

Francis has been making this clear for some time now:

With every passing day it is becoming more obvious: Pope Francis labors not in service to the one true faith, but rather in service to the false religion of “encounter” wherein “good deeds” serve as creed, rite and sacrament alike.

We all have a duty to do good. And this commandment for everyone to do good, I think, is a beautiful path towards peace. If we, each doing our own part, if we do good to others, if we meet there, doing good, and we go slowly, gently, little by little, we will make that culture of encounter: we need that so much. We must meet one another doing good. ‘But I don’t believe, Father, I am an atheist!’ But do good: we will meet one another there.

So, how does Francis justify supplanting the Lord’s command to baptize and to teach with a program that strives for nothing more than to build an earthbound community?

Simple. He told us in the preceding sentences of the selfsame homily:

And so it is that it matters not one iota to Pope Francis, or to the “new evangelists” who applaud his every last move, whether or not one be Catholic or “Evangelical,” or even Muslim, Buddhist or Jew.

Redemption is a done deal for all. As for availing oneself of the fruits of the Redemption? They are at once encountered, received and dispersed – by human hands alone – simply in the performance of good deeds.

This is why there is no room for doctrine in the church-of-man over which Francis reigns, and Robert Barron, his newly minted “brother bishop,” is right there with him, writing in his Zenit article:

[Pope Francis] knows that if Catholicism leads with its doctrines, it will devolve into an intellectual debating society and that if it leads with its moral teaching, it will appear, especially in our postmodern cultural context, fussy and puritanical.

It should lead today as it led 2,000 years ago, with the stunning news that Jesus Christ is the Lord, and the joy of that proclamation should be as evident now as it was then.

Right… as if the Apostles simply ignored the Lord’s command to baptize and to teach; they must have been martyred for exuding too much joy.

Oh well, at this, let us give thanks for the solitary benefit of this dreadful pontificate:

With every passing day it becomes easier and easier to distinguish the fakers from the faithful, and make no mistake about it, Bishop Bobby Barron, poster boy of the “new evangelization,” is a faker.