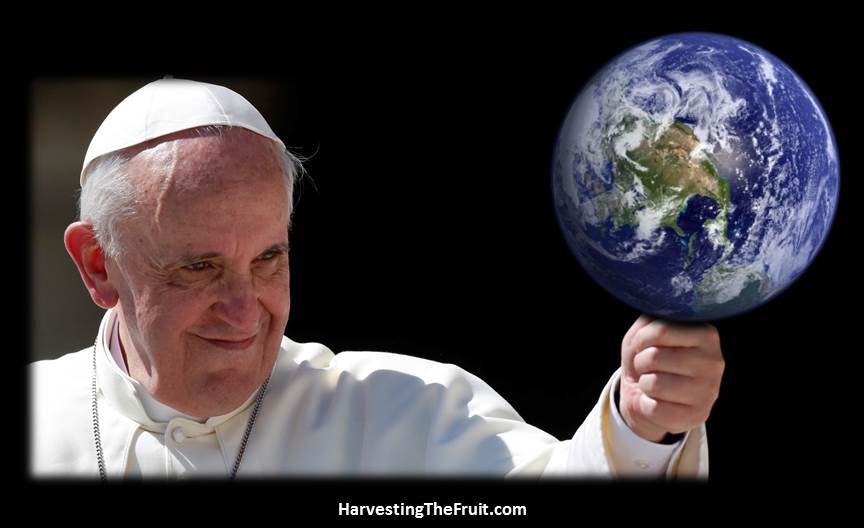 Speaking at the end of the weekly General Audience in St. Peter’s Square the Pope noted that on April 22 we celebrate Earth Day.

“I exhort everyone to see the world through the eyes of God the Creator: the earth is an environment to be safeguarded, a garden to be cultivated” he said.

If only the Bishop of Rome felt a similar sense of responsibility toward the doctrines of the faith and the Holy Catholic Church. Can you even imagine?

“I exhort everyone to see the Mystical Body of Christ, the Roman Catholic Church, through the eyes of God the Creator: the sacred deposit of Christian doctrine is a treasure to be safeguarded, a gift to be revered.”

Sadly, if Pope Francis were to one day speak as passionately about the one true Faith as he does about the earth (i.e., if he were to address the world like a pope who is serious about his sacred duties) it would make international news!

Hey… I have an idea…

Just for fun, let’s take a look at what the papal magisterium of Pope Francis would look like if some of his other exhortations to care for planet earth and the environment were ordered toward exhorting the reverence that is due to the Church and her teachings.

Consider the General Audience of Pope Francis, given 5 June 2013:

This task entrusted to us by God the Creator requires us to grasp the logic of the doctrines of our Holy Catholic faith. Instead we are often guided by the pride of dominating, possessing, manipulating and exploiting; we do not “preserve” the doctrinal treasures entrusted to us, we do not respect them, we do not consider them as a freely-given gift to look after.

Or how about Pope Francis’ Message for the World Day of Peace, given 1 January 2014:

How are we using the Church’s doctrinal treasures? We need to find ways by which all may benefit from the fruits of our Holy Catholic faith, not only to avoid the widening gap between those who have more and those who must be content with the crumbs, but above all because it is a question of justice, equality and respect for every human being.

May Mary, the Mother of Jesus, help us to understand and live every day the doctrinal truths that spring up from the heart of her Son, so as to bring peace to each person in this the Holy Catholic Church.

Or the Address of Pope Francis to the Council of Europe, given 25 November 2014:

Among the issues calling for our reflection and our cooperation is the defence of the sacred deposit of Christian doctrine; of our beloved Holy Catholic faith. It is the greatest resource which God has given us, and is at our disposal not to be disfigured, exploited, and degraded, but so that, in the enjoyment of its boundless beauty, we can live in this world with dignity.

Or the Address of Pope Francis to the European Parliament, given 25 November 2014:

Our Holy Catholic faith needs constant attention. Each of us has a personal responsibility to care for this precious gift which God has entrusted to us. This means, on the one hand, that the doctrine of the faith is at our disposal. Yet it also means that we are not its masters. Stewards, but not masters.

The Holy Catholic Church was established in order that it be a Mother for us, capable of giving to each one what is necessary to live. I once heard something beautiful: the Church and her doctrines are not an inheritance that we receive from our parents, but a loan that our children give to us, in order that we safeguard it and make it flourish and return it to them. The Apostolic Faith is generous and holds back nothing from those who safeguard it. The Holy Catholic Church, which is Mother of all, asks for respect and not violence, or worse yet, arrogance from masters.

As I write, Pope Francis is putting the final touches on his long awaited encyclical on the environment, wherein he will no doubt seek to inspire the peoples of the world to live a life of reverence for planet earth.

Let us pray and fast for this pope, that he may one day be moved to put half as much energy into exhorting the peoples of the world to live a life of due reverence for He who redeemed and now rules the world, Christ the King.

SSPX in crisis: Has Bishop Fellay overstepped his bounds?