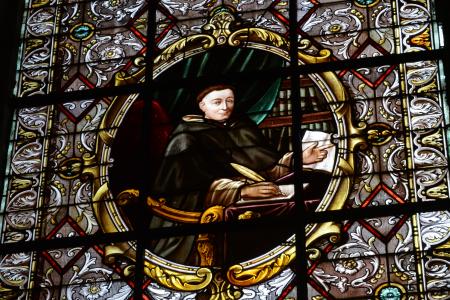 NOTE: Hyperlinks (e.g., “HERE“) are included throughout this article to pages that provide the reader with further explanation and/or citations to support the assertion being made.

“His unwillingness to formally address the dubia directly and plainly changes nothing of the objective reality that is staring us squarely in the face … Francis has judged himself a formal heretic. He is, therefore, an antipope” (Louie Verrecchio)

We will consider the above argument by presenting it in the form of a syllogism and then evaluating it.  The syllogism will take into account the fact that Francis has not been judged a formal heretic by the proper authorities, but only by private judgment. And if we personally believe that by his actions (or lack thereof) Francis has “judged himself,” this is still only our private opinion, and not the judgment of the Church.  With this in mind, here is the syllogism:

Major Premise: A Pope who is considered to have judged himself a formal heretic (according to private judgment alone), automatically ceases to be Pope.

Minor Premise: Pope Francis has judged himself a formal heretic (according to private judgment).

Conclusion: Therefore, Francis is not the true Pope, but an antipope.

For the conclusion to follow both the minor and major must be certain.

DIFFICULTIES WITH THE MAJOR PREMISE

The major is far from certain (if not certainly wrong), and is contrary to the law and praxis of the Church with respect to other bishops, as we will see later.

First: The Magisterium has never taught that a Pope (or any other bishop) automatically loses his office if he is considered to be a formal heretic according to private judgment; neither is this a teaching one will find asserted by the Church’s theologians.  In fact, the Church has no teaching at all concerning if, when, or how a heretical Pope will lose his office. (HERE)

Second: The major premise is directly contradicted by some of the Church’s most respected theologians, who explicitly teach that a heretical Pope will only lose his office after he is declared a heretic by the Church.  The declaratory sentence would not cause the loss of office, but it would precede it.

Both Suarez (d. 1617) and Billuart (d. 1758) said it was the common opinion that a Pope would only lose his office following a declaratory sentence. (HERE)  And they said this at a time when the theologians were solid. John of St. Thomas, who is perhaps the greatest Thomistic theologian since the Angelic Doctor himself, went further by saying “It cannot be held that the pope, by the very fact of being a heretic, would cease to be pope antecedently [prior] to a declaration of the Church.” (HERE) If all these theologians are correct, it means the major is certainly false.

Third: While it is true that some modern theologians have taught that the loss of office would occur prior to the declaratory sentence, it would not take place as long as the Church continues to recognize the man as Pope.

This is confirmed by Fr. Paul Laymann, S.J., considered one of the greatest moralists and canonists of his day, who references multiple authorities who explain that even a notoriously heretical pope will retain his office (and jurisdiction), as long as he is being tolerated by the Church, and is recognized as its universal Pastor (HERE).

Fourth: If it were the responsibility of each Catholic in the street to determine for himself if the Pope is a formal heretic who has thereby lost his office, what would happen if Mr. X believed the Pope was a formal heretic, while Mr. Y thought he was not?  Would he be the true Pope for Mr. Y, but not for Mr. X?  And how would Mr. Y and Mr. X know for sure their private opinion was correct – especially since the Church has never taught if, when or how a heretical pope will lose his office, even if he is a formal heretic?

The Law of the Church

The common theological opinion, attested to by Suarez and Billuart, is confirmed by the law of the Church established by Pope Martin (d. 1431).  This law states that heretical bishops retain their jurisdiction (office) until they are declared heretics by the Church.  Billuart commented on this in his celebrated book, Summa St. Thomae.

I say that manifest heretics, unless they are denounced by name, or themselves depart from the Church, retain their jurisdiction and validly absolve.  This is proved by the Bull of Martin V [which states]: … ‘henceforth no one will be obliged, under the pretext of any sentence or ecclesiastical censure generally promulgated by law or by man, to avoid the communion of any person, in the administration or reception of the Sacraments, or in any other matters sacred or profane, or to eschew the person, or to observe any ecclesiastical interdict, unless a sentence or censure of this kind shall have been published by a judge, and denounced specially and expressly…’

From these lines, we argue that the Church is granting permission to the faithful to receive the sacraments from heretics who have not yet been expressly denounced by name; and, therefore, that she allows the latter to retain their jurisdiction for the valid administration of the sacraments since otherwise the concession granted to the faithful would mean nothing. …  [this] is confirmed by the current praxis of the entire Church; for no one today … avoids his pastor, even for the reception of the sacraments, as long as he is allowed to remain in his benefice, even if the man is, in the judgment of all or at least of the majority, a manifest Jansenist, and rebellious against the definitions of the Church. (HERE)

This law established by Pope Martin is reflected in the current law of the Church (Canon 194) which states that even if a cleric “publicly defected from the Catholic faith or from the communion of the Church,” his removal from office can only be insisted upon “if it is established by a declaration of the competent authority.” (HERE)

What this means is that, according to the current law of the Church, even if a bishop “publicly defects from the faith” he retains his office and all of his official acts remain valid, until the proper authorities establish and declare the fact upon which the loss of office is based.  The loss of office (by law) does not take effect until the declaratory sentence is issued.

This is confirmed by the acclaimed work, “A New Commentary on the Code of Canon Law” by Beal, Coriden, and Green, which explains the following about Canon 194:

This law of the Church is confirmed by many historical examples, such as the case of the 19th Century Archbishop of Paris, George Darboy, who publicly professed heresy and then refused to recant even after being warned by Pius IX. Yet, in spite of this, since he had not been declared a heretic by the Church, the Archbishop retained his office and was even invited by Pius IX to take part in Vatican I.  No one at the time, including the Pope, thought that his publicly heretical statement and evidence of pertinacity resulted in his loss of office. (HERE)

DIFFICULTIES WITH THE CONCLUSION

Not only is the major premise contrary to the mind and praxis of the Church, but the conclusion of the syllogism – specifically the actions that necessarily follow from it – are forbidden by the decree of a general Council.

The Fourth Council of Constantinople attached an excommunication to any layman who separated from their Patriarch (the Pope is the Patriarch of the West) for an alleged crime (judged by private judgment), before the proper authorities first judged the matter. (HERE)  Hence, if a layperson embraces the conclusion and then acts on it, he thereby violates a decree of a general Council.

Additionally St. Thomas explains that those who render a public judgment, that they have no authority to make, are guilty of judgment by usurpation, which is a mortal sin. (HERE) And declaring that a Pope has lost his office due to heresy is certainly a public judgment that only the Church has a right to declare. (HERE)  This means that the conclusion cannot be publicly declared as a fact by members of the laity without committing a mortal sin.

Furthermore, based on the traditional doctrine of the Church (which cannot be denied without mortal sin) the conclusion is certainly false. We know this because Francis was accepted as pope by the universal Church (by at least a moral unanimity of Catholics) following his election.  This, in and of itself, provides infallible certitude of his legitimacy.  As Cardinal Billot explains, “the adhesion of the universal Church will always be, in itself, an infallible sign of the legitimacy of a determined Pontiff.” (HERE)

Francis’ legitimacy falls into the category of a dogmatic fact, which is not only infallibly certain (HERE) but cannot be denied without committing a mortal sin against the faith (HERE), if not heresy. (HERE)

In light of what we have seen, the major premise is almost certainly false, being contrary to the mind and praxis of the Church.  The conclusion is infallibly wrong, and cannot be publicly declared by private judgment without committing a mortal sin; nor can it be acted on without violating the decree of a General Council.

Where does this leave us?  It leaves us with the responsibility of sanctifying our souls by doing our daily duty.  We can defend the Faith to the best of our ability during the current crisis, but should not exceed our authority when doing so.  In the case of the current Pope (and previous ones), we should allow the proper authorities to render the necessary judgments and take the necessary actions, which will certainly happen at the time appointed by God.

[NOTE: As I wrote yesterday, Robert and I are confident that, if nothing else, we will demonstrate that so-called “traditionalists” (aka Catholics) can disagree strongly on important matters and yet remain charitable toward one another. Thanks in advance to readers / commenters for contributing to this intention by staying focused on the content of the arguments alone; i.e., refraining from anything that might be viewed as a personal attack of any kind. – Louie]