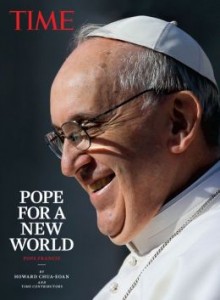 Last week, in the aftermath of Pope Francis’ interview, I attempted to argue that such things are a terrible idea, especially for a pope who is prone to expressing himself with the kind of theological precision that one might expect from an octogenarian Lutheran organist and her Methodist neighbor while chitchatting at the local coffee shop.

Seriously, scour L’Osservatore Romano’s archives, not just for Pope Francis’ public statements, but those of all the popes of the past several decades, and what you’ll find is that more often than not the things they say could just as easily be attributed to Billy Graham. What you won’t find are any explicit calls for heretics to convert, or anything that even hints at… get ready for it… that dreaded triumphalism.

Pope Francis’ last two contributions to this voluminous genre of papal prattle, namely, his 11,000+ word interview with America Magazine and his four page letter to the atheist publisher of the Italian newspaper La Repubblica, are perfect examples.

The vast majority of these texts are comprised of largely generic Christian fluff that at best makes occasional vague reference to “the Church,” while avoiding at all costs any explicit mention of the utter uniqueness of the Holy Roman Catholic Church; in other words, rhetoric that could just as easily be broadcast on an evangelical radio program.

So what, the papal apologists may protest, magazine interviews and the like carry little to no doctrinal weight. He’s simply connecting with a broader audience, meeting them ‘where they are.’

As is the case with most nefarium, this has a thread of truth, and that’s precisely the problem.

Yes, these casual papal orations do reach a much broader audience than simply the Catholic faithful; they reach fallen away Catholics and all manner of heathens and heretics, the very same people who barely know an Encyclical Letter from a letter-to-the-editor; i.e., the very individuals who need Catholic clarity the most.

While the self-styled Swiss Guard types in Catholic media may feel compelled to deflect blame from the pope by pointing to fact that Pontiffs past didn’t have to contend with the lightening speed of current day global communications, it’s not as though Pope Francis just emerged from some cryogenic vault alla Austin Powers. He knows darn well that his every peep makes international news. In fact, one is hard pressed not to imagine that he rather enjoys the celebrity.

Thanks in large measure to the lengthy pontificate of Pope John Paul II, the papacy has taken on the aura of rock stardom, to the point where the world simply expects a globetrotting pope who plays to the camera on a near daily basis with a shtick that is crafted to offend practically no one.

And please, spare me the “shepherd walking among his flock” nonsense. This notion is no more compelling, or healthy, than those insipid parents who hang out with teenagers in the name of being their children’s “friend.”

It’s time for this pope, and those who will succeed him, to cut way back on time spent before the watchful public eye, making themselves seen and heard far more sparingly; when the gravity of a given situation truly merits a public proclamation from the Vicar of the King.

While the status quo may be sending a thrill up the leg of Chris Matthews and winning the applause of some Hollywood liberals, it isn’t going to win many converts for Christ.

Macy’s launches “Girl who wants a penis” for Christmas