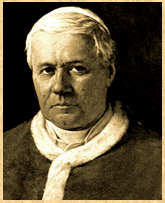 I have little doubt that the title to this piece pretty much guarantees that the majority of Cotton Candy Catholics won’t even bother to read it. You see, for those who prefer to dwell in that fairy tale version of Catholicland wherein nary a crisis endures, the very question alone is like a serial killer making a cameo appearance in a child’s bedtime story.

Even so, it is an important, and eminently fair question for well-grounded Catholics to ask nonetheless.

This, however, raises yet another crucially important question, to whom shall we turn for an answer?

I can think of no more qualified authority than Pope St. Pius X and his magnificent Encyclical, Pascendi Dominici Gregis.

We’ll begin with a look at the more “modernistic” public statements and acts of Pope Francis, and then from there, we will measure them against the timeless wisdom of Pope St. Pius X.

While there are any number of topics one might examine in this effort, I’ve chosen to consider what is perhaps the most basic of all; namely, Pope Francis’ treatment of religion in general.

On the first full day of his papacy, the Holy Father raised a very large red flag during his audience with some 6,000 journalists and their families in Paul VI Hall, at the conclusion to which he decided to refrain from offering his Apostolic Blessing by making the sign of the Cross over the attendees while invoking the Blessed Trinity.

Why? In the pope’s own words, the Holy Father decided not to behave as Christ’s Vicar is expected to behave simply “out of respect for the consciences” of non-Catholics.

With this being the case, no one should have been surprised when, during his first Apostolic visit outside of Rome (to Lampedusa) the Holy Father extended his best wishes to Muslims about to begin Ramadan, an observance prescribed in the Qur’an to “magnify” the false god, Allah, telling them, “I trust it will bear abundant spiritual fruit.”

“Do you need to convince the other to become Catholic? No, no, no! Go out and meet him, he is your brother. This is enough. Go out and help him and Jesus will do the rest.”

On September 10th at the Jesuit refugee service in Rome, Pope Francis said to the diverse gathering of assorted heathens and heretics:

Each of you, dear friends, carries a life story that speaks of drama and war, of conflict, often linked to international politics. But each of you carry above all a richness of humanity and religion, a richness to be welcomed, not feared. Many of you are Muslims, of other religions, and have come from different countries, from different situations. We must not be afraid of the differences! Fraternity makes us discover that they are a treasure, a gift for everyone! We live in fraternity!  (The original text is available in Italian on the Holy See’s website.)

Fortunately, even though Pope St. Pius X is a blessed member of the Church Triumphant, still he is able to evaluate and comment upon this situation through the timeless wisdom imparted in Pascendi Dominici Gregis.

Following is but a small sampling of what this great Pontiff, whose papacy was dedicated to “restoring all things in Christ,” has to say:

And with what right will Modernists deny the truth of an experience affirmed by a follower of Islam? With what right can they claim true experiences for Catholics alone? Indeed Modernists do not deny but actually admit, some confusedly, others in the most open manner, that all religions are true. That they cannot feel otherwise is clear. For on what ground, according to their theories, could falsity be predicated of any religion whatsoever? …  For they heap such praise and bestow such public honour on the teachers of these errors [false religions] as to give rise to the belief that their admiration is not meant merely for the persons, who are perhaps not devoid of a certain merit, but rather for the errors which these persons openly profess and which they do all in their power to propagate.

So, back to our question: Is Pope Francis a modernist?

The answer, according not to me, but to Pope St. Pius X, is yes.

Now, while Pascendi states very well that modernism is “the synthesis of all heresies,” it is necessary to distinguish between material heresy and formal heresy.

For our part, we must content ourselves with the objective. In the present case, the only conclusion that one can reasonably draw is that Pope Francis is indeed a modernist.

So, what shall we, members of the Household of God, do with this knowledge?

Well, on an individual basis, I suppose that all depends on how “grown up” one is in the Faith.

The little ones, who are not yet prepared for solid food, haven’t the wherewithal to even recognize that a problem exists. Others, who are somewhat more mature in the Faith, are so taken with the false idea that Daddy can never be wrong, that they will rush to defend him at every turn, regardless of how outrageous his behavior might be. Still others in the household are informed enough to see the problem, but are too weak to confront it, choosing instead to profess to “keeping their eye on the prize,” essentially sticking their fingers in their ears and humming “Amazing Grace” in the hope that it will all just go away.

The smallest number of those among us, however, will look without fear at the bitter reality that papa is drunk on modernism, and his reckless behavior is so dangerous that it threatens not only those who dwell within the Household of God, but even those who wander in darkness beyond its walls.

Among them, a relative few intrepid souls will do everything in their power to warn the others, both within and without, taking bullets and arrows and all manner of artillery simply for daring to proclaim the immutable truths of the Faith that alone can assure our salvation.

It’s a thankless job, this, but someone has to do it.