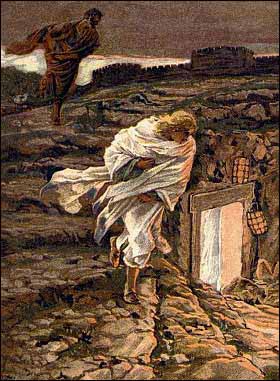 A recent blog post entitled, Losing my religion, by Mary DeTurris Poust, who is a Catholic writer and the wife of Dennis Poust, the Communications Director of the New York State Catholic Conference, is garnering a lot of attention. (See posts by Deacon Greg Kandra and Rod Dreher, for example.)

To get right to the point of her post, Mary DeTurris Poust is spiritually hungry, starving even, and in my view, it’s not her fault. Not by a long shot.

“I almost walked out of Mass in the middle last night,” Ms. Poust begins, and not just over some isolated issue in one specific parish, but rather due to what she called, “a universal problem, as in Universal Church.”

She explains: (I’ll paraphrase; you can read the rest there.)

It wasn’t that the priest was preaching heresy … It was the overwhelming, long-building, near-constant feeling that my Church really doesn’t care enough to try to feed me spiritually, that the Church is daring Catholics to leave…

You get a Gospel like we had this Sunday – “No one can serve two masters…You cannot serve both God and money.” – and you choose to drone on for 20 minutes about temperance and prudence and fortitude and justice in a disjointed, monotone, utterly incomprehensible way? I’m sorry, but you’re going to have to do better than that…

I think every Catholic who is sitting in church week after week wondering, Why? Why? WHY? … should walk out every single time they are insulted by or condescended to or lied to by someone on the altar until something starts to change, until Pope Francis’ challenge begins to take shape before our eyes, not just in beautiful words spoken by a courageous man.

Though it is clear from her words that she is unable at present to recognize as much, Mary is but one of countless millions of victims of the post-conciliar epidemic wherein sincere Catholics who long for all that the Lord wishes to give have unwittingly contracted, in some considerable measure, a protestant understanding of Christianity.

And how did Mary get exposed to this dreadful spiritual disease?

From making the terrible mistake of innocently buying far too much of what the sacred pastors of the Church, including the Supreme Pastors who have occupied the Chair of St. Peter over the last fifty years, were selling.

To be more specific, all indications are that Ms. Poust seems to have ingested – hook, line and sinker – the failed post-conciliar liturgical view of the Mass as little more than the Catholic version of the protestant praise and worship service.

Again, it’s not her fault. The Holy Sacrifice of the Mass, as it existed for more than a thousand years in the Roman Rite, was deliberately sliced and diced and repackaged to resemble as closely as possible the anthropocentric Sunday service of the heretics, wherein hearing some Scripture and a meaningful sermon, along with a dash of fellowship and a call to action, is all anyone can or should expect.

Now, that’s not to say that those who have embraced, even in innocence, this protestantized view of the liturgy are overlooking the centrality of the Eucharist.

Mary, for her part, made it clear in a follow-up post that the Eucharist is the only reason she hasn’t run for the hills already, and that’s good to know, but here’s the crux of the matter:

While it is absolutely right to look to the Mystical Body of Christ, the Catholic Church, and her sacred pastors, to quote Ms. Poust, “for someone who wants to meet me in my darkness and walk with me spiritually,” and to exclaim as she did, “I cannot put up with parishes that do not even attempt to lead spiritually, that do not care what their people need,” it is a flawed view indeed to imagine that such provisions are primarily delivered by means of the sacred liturgy.

In other words, it is not the nature of Holy Mass to provide spiritual guidance, or even just a decent homily (which, after all, is optional at daily Mass for a reason.)

For those who suffer from this post-conciliar, quasi-protestant, liturgical myopia, the ideal Mass would presumably be one in which the music, the readings, the fellowship, the ceremonial actions, the priest’s persona and the homily all engage and speak, in some considerable measure, to one’s spiritual needs in a personal and profound way, accompanied, of course, by the “source and summit” that is the Holy Eucharist.

This describes, of course, nothing other than the praise and worship services of the heretics, albeit with the addition of the Eucharist which is (inadvertently, to be sure) reduced to something akin to a cherry on top of an ice cream sundae.

I don’t know Mary, but my sense is that she is being moved in her unrest by the Lord Himself, He who literally died to give us so much more than is made readily available to the faithful in the overwhelming majority of places amid the realities of Catholic life circa 2013.

It appears as if Mary does indeed understand that the malady runs far deeper than just banal liturgy.

“As I tried to get across in yesterday’s post, my discontent with my current church experience is not based on a single homily or even a series of homilies or homilies in general; it’s based on the whole package,” she wrote in her follow-up.

If I could make a suggestion to Mary, and to all who identify with her struggle, it would be this:

The urge to run is a call from God. Yes, run like Peter and John to find the Risen Christ, but do not be deceived into imagining that He, or any meaningful refuge, can be found anywhere other than in the faith that comes to us from the Apostles. No, not the utterly dissatisfying, repackaged, version born in the 1960’s, but in the rich spirituality, immutable magisterium, and timeless liturgy that predated the Second Vatican Council, the same that admirably nurtured Catholics just like you and me for many centuries on end.

Sure, our circumstances are different from those who lived in ages past, but Our Blessed Lord has not changed even one iota, and His voice rings out over the centuries with a clarity unheard in recent decades, and it can dispel the confusion and unrest that plague so many in our day.

No, it won’t be easy; not in the least, but then again nothing worth a wooden nickel is. Nor will it be without pain.

It’s going to be a bitter experience indeed to come face-to-face with the unavoidable conclusion that your rich Catholic inheritance has been stolen, and that every pope who has reigned for the last sixty-plus years has contributed, either in what he has done or in what he has failed to do, to the bitter spiritual anguish that you’re now experiencing.

The reward, however, is priceless; namely, the unshakeable knowledge that the Lord provides for our every spiritual need, without fail, through His Holy Catholic Church alone, even when, in ages like our own, He allows weak and sinful human shepherds to mislead His little ones.

The consecration of Russia: An extraordinary remedy?