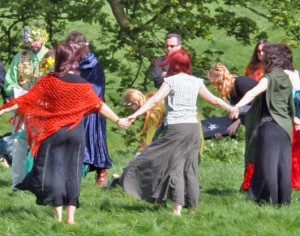 OK… Every time I use parody lately, I end up having to point out later, “Hey guys, this is just a parody.” So, right out of the gate, know that this is. Don’t, however, let that fool you into thinking this isn’t a very serious subject.

The Holy Father just issued a message to Muslims; i.e., those who worship the false god, Allah, to mark the end of Ramadan, the feast dedicated to “amplifying” this figment of the false prophet Muhammad’s imagination.

Speaking of imagination, imagine if you will what a similar message to another false religion might look like.

Message from His Holiness Pope Francis to Wiccans throughout the World

It gives me great pleasure to greet you as you celebrate the sabbat of Lughnasadh, so commencing the month of August, dedicated mainly to honoring Lugh, the sun god.

This year, the first of my Pontificate, I have decided to sign this traditional message myself and to send it to you, dear friends, as an expression of esteem and friendship for all Wiccans, especially those who are religious leaders.

This year, the theme on which I would like to reflect with you and with all who will read this message is one that concerns both Wiccans and Christians: Promoting Mutual Respect through Education.

Turning to mutual respect in interreligious relations, especially between Christians and Wiccans, we are called to respect the religion of the other, its teachings, its symbols, its values.

It is clear that, when we show respect for the religion of our neighbors or when we offer them our good wishes on the occasion of a religious celebration, we simply seek to share their joy, without making reference to the content of their religious convictions.

At the Mass marking the beginning of my ministry, I greatly appreciated the presence of so many civil and religious leaders from the Wiccan world. With these words, I wished to emphasize once more the great importance of dialogue and cooperation among believers, in particular Christians and Wiccans, and the need for it to be enhanced.

With these sentiments, I reiterate my hope that all Christians and Wiccans may be true promoters of mutual respect and friendship, in particular through education.

Seems preposterous, doesn’t it? Well, it should.

So, what is the primary difference between the message of the pope to Muslims and the parody above?

Some will be tempted to answer, “We worship the same God as Muslims!” Others who know better may be tempted to point to claims of “common patronage” in Abraham.  Others still will point to “monotheism” and the fact that Wicca is far more obviously false.

All of these responses speak to the very reason why the pope’s message to Muslims is even more dangerous and ill advised than the parody message to Wiccans; namely, it lends credibility to a demonstrably false religion that is at pains to disguise itself as being dedicated to the One true God.

And isn’t that Satan’s way, to dress up his lies in the cloak of believability in order to entice more souls to Hell?

Objectively speaking, the practice of Islam cannot lead to salvation. That’s Catholic dogma. Even so, the Holy Father said that in so greeting the Muslim world, “we simply seek to share their joy, without making reference to the content of their religious convictions.”

With all respect, this is ludicrous. How can the Vicar of Christ “share the joy” that comes from worshiping the false god of a false religion that rejects Jesus Christ without “making reference to the content of their religious convictions?” Like it or not, this greeting is just such a commentary. It’s also a commentary on the conviction of the Church, misrepresentative though it may be.

Sorry, Holy Father, you have missed the mark. The mission of the Church is not to share the false “joy” of those who reject Christ, the mission is to call them to conversion, at which point there will be much joy, not just on earth, but in heaven.