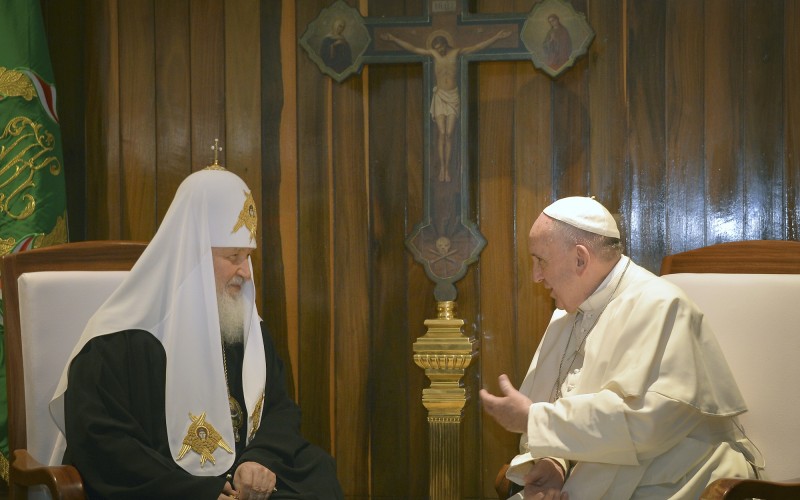 As Cornelia Ferreira pointed out in her recent post Fatima Through the Lens of Vatican II: As Illustrated by Raymond Cardinal Burke, the Blue Army Vatican mouthpiece has an interesting suggestion for a future Consecration:

“Perhaps now is the time to invite our Russian Orthodox brothers to join in a consecration in order to please Our Lord who told Sr. Lucia, ‘I want my whole Church [WAF’s emphasis] to acknowledge that consecration as a triumph of the Immaculate Heart of Mary….’”

The effort to recast the Fatima message into an endorsement for all things conciliar; including the activities of the ecumenical church-of-dialogue, is nothing new, but this was the first time I had ever encountered a proposal for just such a joint effort with the schismatic Russian Orthodox.

One wonders, is this just some random suggestion from an overzealous ecumenist, or does the idea actually enjoy support among influential churchmen?

Apparently, it is the latter.

As recently reported by Maike Hickson, whose finger on the pulse of the Church in Germany is proving to be of great value, the idea found support among at least one of the Dubia Brothers:

In 2016, shortly after the brief meeting in Cuba between Pope Francis and the Orthodox Patriarch Kirill, Cardinal Meisner proposed at the same above-mentioned conference (video, in German, available HERE) that this historic event could and should inspire both the Catholic and the Orthodox leaders to “consecrate us all to the Mother of God in the midst of the current difficulties, just as the seer children of Fatima proposed it.” [emphasis added by Mrs. Hickson]

Needless to say, neither Our Lady, nor the seer children, ever proposed such a thing.

Yes, but would not the Orthodox do well to humbly make a consecration of their own to Our Lady anyway?

If carried out with sincere intentions, I suppose so, but only inasmuch as it is understood that the very purpose of Marian consecration is to allow Our Lady to lead us closer to her Son and to use us in service to Him in all things.

For the Orthodox, this would most certainly mean their conversion to the one true Church of Christ – the Holy Catholic Church – in union with and under Peter.

With this in mind, one might feel compelled to argue:

What then is so dangerous about taking the occasion of the centenary year of the Fatima apparitions to call for a “joint” consecration with the Russian Orthodox? Maybe this will serve as a stepping stone to their conversion.

In other words, What can it hurt?

This is an important question to ponder with respect to Fatima in general, and I will take it up in a more general sense in a future post.

With respect to the joint consecration idea and its variants, the dangers should be obvious; starting with the fact that ends do not justify means.

Specifically, one is not free to distort, or even to ignore, any  part Our Lady’s message simply because doing so might achieve some good end. Unfortunately, however, this is an attitude that even some “traditionalists” (aka Catholics) now seem to embrace.

In the present case, posturing as if Our Lady herself was content to confirm the Russian Orthodox in their schism, which is precisely what inviting them to join the Vicar of Christ (whose authority they happen to reject) in an act of consecration would do, provides the exact opposite of good hope for their conversion.

Long story short, I think its reasonable to suspect that plans are likely underway at this very moment for a joint Orthodox-Catholic act of consecration as part of the Vatican’s attempt to further deceive the faithful in this centenary year of the Fatima apparitions. Perhaps in October? We’ll see…

In the end, it’s simple; as I’ve written in before:

Either one is willing to promote and defend Our Lady’s message whole and entire (and this necessarily means promoting the Catholic faith and the mission of the Church in its fullness) or not.

For decades on end, Church leaders all the way up to the popes have been operating on the assumption that they have a better idea than Our Lady:

– Rather than revealing the Third Secret in 1960 as asked, it was shelved by John XXIII for a future pope.

– Rather than specifically consecrating Russia to the Immaculate Heart of Mary as requested, a number of other more general consecrations were done; none of them in union with the bishops of the world.

– Rather than gratefully accepting the period of peace that would have resulted from doing as Our Lady asked, the popes have embarked on a series of sacrilegious and embarrassing substitute ventures; e.g., the Assisi abominations, endless interreligious dialogue, planting trees, and even hosting soccer games for peace.

– Rather than revealing the Third secret in its fullness, the Vatican under John Paul II, with the complicity of his future successor, crafted a magnificent act of deception that is still being perpetrated.

Based on all of this, I’d say that it’s more likely than not that a joint consecration dog-n-pony show will soon be added to the mix.

And what kinds of things have we to show for all of these half-steps toward, and outright rejections of, Our Lady’s message?

And that’s nothing compared to the chastisement that is coming should we obstinately stay the present course.