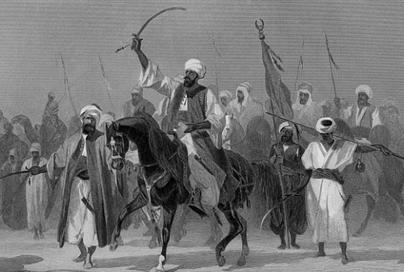 Are current events in the Middle East the stuff of Biblical precedent, and perhaps even Biblical prophecy?

Duh! One may as well ask, Is the pope a fervent defender of Catholic doctrine?

Esau, who despised his birthright, married from among the Ishmaelites as an act of rebellion against his father, Isaac.

The reason for the prohibition against marrying from among the Canaanites is pretty simple; when the sons of God marry the daughters of men, the influence of the latter’s false religion eventually leads men away from the one true God. Scripture attests to this rather clearly.

Now, back to Esau…

Herod Antipas, who married his sister-in-law (Herodias, also of the family of Herod by birth) in violation of God’s law, imprisoned John the Baptist for daring to call him to account for his offense.

It was this same Herod who succumbed to the request of the daughter of Herodias for the head of John the Baptist, the cousin of Our Blessed Lord and the prophet who pointed to the long awaited Messiah saying, “Behold the Lamb of God.”

The world is in turmoil in many ways indeed, but one of the most noteworthy is the terror being wrought by the hands of those descended from the Ishmaelites; the Muslims, who are causing havoc, not just in the Middle East, but all over the globe.

Daily we see news reports from Iraq detailing how those who are faithful to Jesus Christ, the Lamb of God, are being beheaded for the very same reason John the Baptist was beheaded; for arousing the demonic anger of those in the line of the Ishmaelites by daring to profess the Truth.

Surely there’s nothing new under the sun; the righteous have ever been slaughtered by the seeds of the serpent from the time of Cain and Abel.

Even so, something more is at play as it relates to the Muslims, the descendants of Ishmael of whom God said:

He shall be a wild ass of a man, his hand against every man and every man’s hand against him; and he shall dwell over against all his kinsmen. (Gen 16:12)

What else did God have to say of this wild ass of a man who will be a menace to humanity?

Notice that God does not say, “I will make him a great religion;” rather, He foretells of a great “nation” descended from Ishmael.

As for the “greatness” of nations insofar as Scripture attests, this does not necessarily mean great in virtue; rather, it may refer to the greatness of its evil deeds.

Thus says the LORD: “Behold, a people is coming from the north country, a great nation is stirring from the farthest parts of the earth. They lay hold on bow and spear, they are cruel and have no mercy, the sound of them is like the roaring sea; they ride upon horses, set in array as a man for battle, against you, O daughter of Zion!” (Jeremiah 6: 22-23)

The “great nation” of which the Lord warns through the prophet Jeremiah is none other than Babylon.

And where is modern day Babylon?

Iraq, where those in the line of that wild ass who was born of a slave woman, having drunk deeply from the demonic influence of the false prophet Muhammad, are at war with the sons of the free woman who profess Christ Jesus.