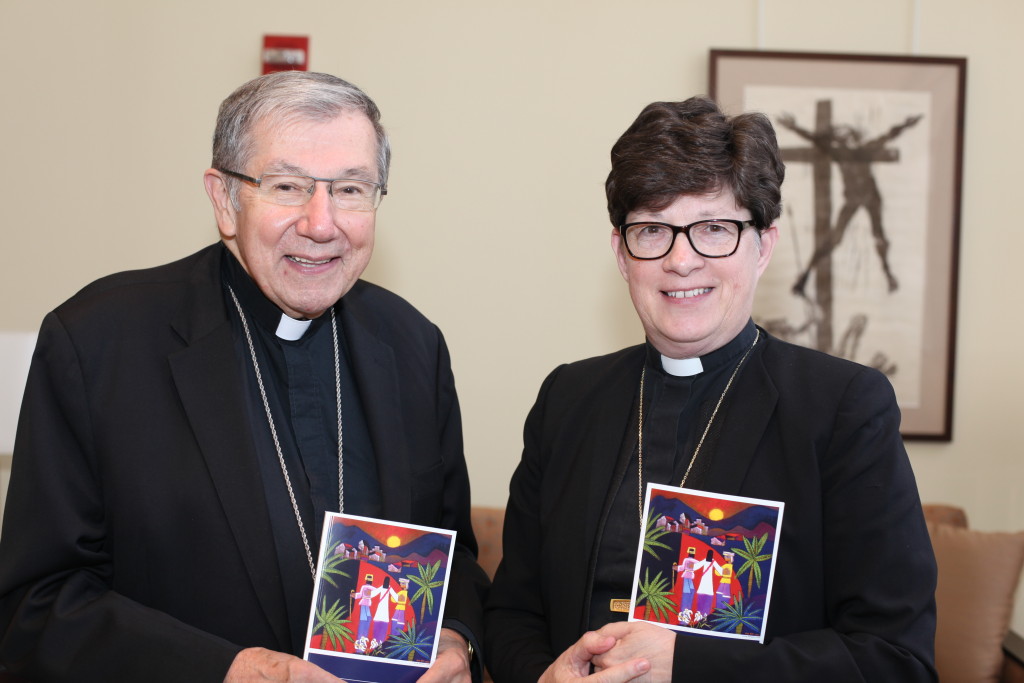 Bishop Dennis Madden, an auxiliary of Baltimore (left) and a Lutheran fella in a Halloween costume (right) holding up copies of “Declaration on the way.” Funny how often Baltimore finds itself at the forefront of these attacks on the faith…

The National Catholic Register and the USCCB are on the way.

The former, “a service of EWTN,” apart from the excellent reporting of Edward Pentin, is well on its way to becoming the Pravda of the post-conciliar church-of-man; offering precious little more than propagandized puff pieces in service to the aims of the Apostasy Party, headquarters, Rome.

On January 12, for example, the Register published an article fawning over “a new milestone in Catholic-Lutheran dialogue;” the document, Declaration on the Way, published by the USCCB in October 2015.

According to the article, Declaration on the Way provides evidence of just “how much closer the two churches had come together” over the past fifty years.

Fair and accurate enough (setting aside the fact that the Lutheran thing isn’t a “church.”)

The tone of the report, however, belies the fact that all of the movement in this case has been on the Catholic side (a hallmark of the entire interreligious dialogue effort) as her leaders stride ever more boldly toward full blown Protestantism.

Right from the outset, the authors of the USCCB text show their nefarious intent by twisting the words of St. Basil the Great in an attempt to make it appear that this Doctor of the Church would support their diabolical efforts. (No real surprise here given the fact that the Council itself misappropriated Scripture to create its own desired illusion. See HERE.)

In the opening words of the Introduction, Declaration on the Way offers the following quote:

I think then that the one goal of all who are really and truly serving the Lord ought to be to bring back to union the churches which have at different times and in diverse manners divided from one another. – St. Basil the Great (330–379), “Epistle CXIV”

Agents of the Devil that they are, I suppose it never crossed their darkened minds that ordinary lay folk with an internet connection and an abiding interest in knowing the truth just might take the time to read St. Basil’s Letter to Cyriacus at Tarsus (otherwise known as “Epistle CXIV”) for much-needed context, thus revealing the disgusting depths to which they have plainly descended in pursuit of their evil designs.

Even apart from this, it should be entirely evident that in writing (in the fourth century) of the union of the “churches,” St. Basil was not speaking of anything even remotely resembling the present situation concerning the heretical communities that sprang forth from the Protestant Revolt.

At the time of the letter’s writing, St. Basil was addressing a heresy wherein “many mouths are opened against the Holy Spirit;” claiming that the “Holy Spirit is a creature” (as described the preceding Epistle CXIIV).

The conditions that make possible the “union” of which St. Basil writes in the letter that is quoted (entirely out of context) by the USCCB include the following:

Exactness and strength in the faith … zeal not to betray the sound faith … solicitude for the Church … correctness of faith … zeal for the truth … readiness to suffer for the true doctrine … profess the faith as set forth by our Fathers once assembled in Nicaea and deny not a single one of the statements there.

Read in context, it is perfectly clear that St. Basil would not for even a moment bless the efforts of the duplicitous frauds who so dared to impugn his virtue.

As if committing the sin of calumny against this Doctor of the Church were not enough, the authors of the USCCB text immediately state:

“This Declaration on the Way (In Via) to unity seeks to make more visible the unity we share by gathering together agreements reached on issues of church, Eucharist and ministry.”

One need not even be a Catholic to see evidence of error given the contradictory nature of this statement; we are on our way to unity … we currently share unity.

In reality, both statements are false.

The Holy Catholic Church has always had, and will always have, perfect unity, and those who depart from her wound not the Church but themselves by departing from said unity.

The ecumaniacs, by contrast, presume to operate as if the Church that we profess in the Creed as “One” has ever been just one heretic away from losing her unity.

At this, I trust that it’s not necessary to delve any more deeply into this 120 page Protestant manifesto in order to demonstrate just how shameful and dangerous it is.

Be that as it may, here are just a few of the many gems being presented therein as “Agreements” between “Catholics” and Lutherans (God forbid!):

Folks, nothing could be more obvious: These people do not have, and likely never had, the Catholic faith!

The Church didn’t just happen to “arise” from “the whole event of Jesus Christ,” whatever in the Hell that even means. My guess is that the authors of this crud believe that the “Christian community” gave rise to itself, as opposed to being deliberately instituted by Christ and endowed with a hierarchical structure.

Whatever their particular motives may be, Jesus Christ isn’t an “event;” He is true God and true man, and He established as an act of His will one Church – the Holy Catholic Church.

“Lutherans and Catholics recognize in both their ecclesial communities the attribute of apostolicity grounded in their ongoing continuity in apostolic faith, teaching and practices.”

Let’s be clear: While the moron signatories to this garbage who present themselves as “Catholics” claim to see apostolicity in the Lutheran heretics; those who hold the Catholic faith recognize no such thing.

Where there is “apostolicity,” there is the priesthood. Pope Leo XIII made it plain that among such groups as the Lutherans “the true Sacrament of Order as instituted by Christ lapsed, and with it the hierarchical succession.”

As for “continuity in apostolic faith,” maybe Bishop Madcap can inform us where female “ordination” and gay unions are to be found in Apostolic tradition. What a joke this guy is; a perfect fit in my home diocese.

“Lutherans and Catholics agree that the proclamation of the gospel is foremost among the various tasks of the ordained ministry.”

Wrong again. “Preaching” is foremost among the heretic laymen who call themselves “ministers,” but the primary duty of the priest is to assist the bishop in offering the Holy Sacrifice of the Mass and administering the Sacraments.

To be fair, the “Catholic” authors of this text are simply putting their conciliar credentials on display, mimicking what it said (and just as falsely so) in the Decree on the Ministry and Life of Priests, Presbyterorum Ordinis:

Since no one can be saved who does not first believe, priests, as co-workers with their bishops, have the primary duty of proclaiming the Gospel of God to all. (PO 4)

If nothing else, this serves as an excellent illustration of a reality that far too few are willing to recognize; namely, the degree to which a near singular focus on ecumenism dictated the direction of the Council.

“Through our dialogues, we are renewed in our commitment to continue together on the way to full communion, when we will experience our unity in sharing the Eucharist, in the full recognition of each other’s ministries and of our being Christ’s church.”

REALITY CHECK: The only way to “full communion” is the conversion of the heretics (which includes even the self-identified “Catholic” signatories to this embarrassing document, His “Excellency” Dennis Madden chief among them) to the one true faith, at which time all concerned will recognize what the Lutherans presently consider to be their “ministries” as really nothing more than the activities of misguided laymen leading others to perdition.

Until then, the title to the document does have some merit; the USCCB is indeed on the way; on the way straight to Hell.

Can the State order Holy Mass to be canceled?