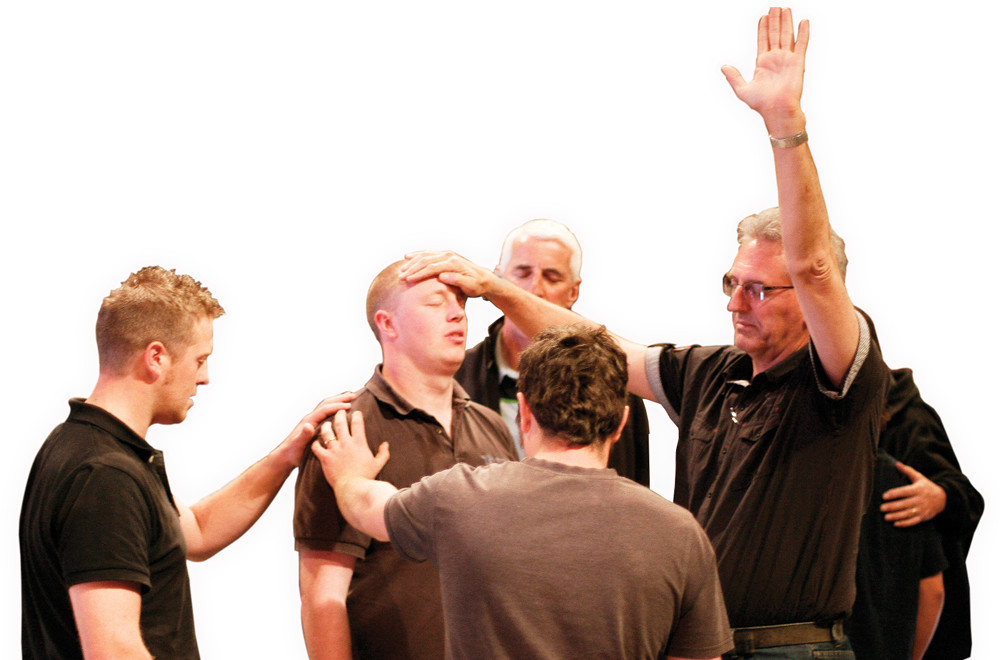 The Catholic “Manly Men Movement” may well be a good faith attempt to remedy a real problem, but it’s as much a symptom of the feminist infiltration of the Church than it is a solution.

A couple of clarion calls for men to be manly men have been making their rounds on Catholic social media of late, and to a great deal of applause, much of it from friends.

One comes from a recent interview of Cardinal Raymond Burke, the other, a video produced by the Diocese of Phoenix, AZ.

I get it, I suppose. The applause, that is. These things give voice to those of us who lament the virtual castration of men that is so evident in the Church, and indeed the world, today.

That said, the reality is that while both of these offerings contain some praiseworthy insights – like the necessity of frequent confession, the power of self-denial, and the value of ordinary work, etc…

For the most part, they simply state the obvious:

Men are built for sacrifice; we are called to be providers, protectors and leaders and so on.

That’s all well and good and true, but pretty much everyone save for the most militant of feminists and feminized of the mezza-finocch’s already know this.

On these two notes, in my estimation, both Cardinal Burke and the Diocese of Phoenix miss the mark.

Let’s begin with the video. It was inspired by a lengthy exhortation called “Into the Breach” written by Bishop Thomas Olmsted of Phoenix and it runs about 10 minutes long. Again, it offers any number of praiseworthy thoughts – mainly of the sort that everyone even remotely Catholic already knows.

I’ve linked it below so you can watch it in its entirety.

My focus here concerns the reason so many men today are so weak and what can be done about it.

Take a look at this one minute collection of excerpts and we’ll return to talk about it:

OK … While I’m sure this will invite the anger of some viewers, I have to say, there’s an aspect to much of the manly men movement in the Catholic Church that strikes me as more than a little tainted with the very feminism it’s intended to confront.

Don’t get me wrong, it’s a great thing to have solid Catholic friends, I do; both male and female. Faith is the primary focus of most of our conversations , and yes, we do encourage one another in the most difficult task that all of us face – growing in holiness.

Friendship like this is great, and I pity the Catholic that doesn’t have it, but it’s not the means of holiness given to us by Christ. We’ll come back to this point later.

Look, at the end of the day, as a man, a husband and a father, I don’t need a “band of brothers” to rescue me on a weekly basis from isolation and to reassure me, as the one commentator said, that “I’m not alone.”

The truth is, in many ways, as men, we are alone. That’s part of being a man.

We are singularly responsible for being the heads of our households; for making decisions that might not be popular, for leading, sacrificing, protecting, providing and so on…

Like it or not, when all is said and done, being a man really does mean carrying that responsibility, with Christ for sure if we want to carry it well, but with respect to other men and in our own lives and in our own households – we carry it alone.

There’s a great line in the film The Godfather that comes to mind here. Don Corleone is talking to Michael and he says, “Women and children can be careless, but not men.”

Now, before you get angry, let me be clear – women cannot be careless. Being a mother and wife is serious business.

That said, what both women and children do share in common is that together they are among the protected, and together they are led in particular way by the man of the family. While the man, for his part, carries out his role in a singular way.

The manly men movement such as I’m addressing it here seems to focus quite a lot on what Bishop Olmsted called “individualism and isolation, which leaves the heart empty…”

That’s terrific, but that’s not the problem. There are plenty of men who are neither isolated nor individualistic, and yet their hearts are empty and they’re well on their way to Hell.

If you need an example, take a good look at the Roman Curia: The Pontifical Commission for Interreligious Dialogue… The Commission for Religious Relation with the Jews… The Council for Promoting Christian Unity and so on…

Those bands of brothers have practically nothing in their hearts and they’re headed for Hell.

By contrast, the Church has many Saints – real ones – who were hermits. Pope St. Celestine V, as you may recall, got a lot of attention when Pope Benedict fled for fear of the wolves.

Celestine was essentially forced into the papacy, only to renounce it less than a year later to resume the life of a hermit.

According to the tenets of the manly men movement, he probably should have formed a support group of other manly men to confide in, to share his struggles as father of the entire Church, and if he had, maybe his band of brothers could have reassured him that he’s not alone, picked him up and helped him carry on.

The reality is that the role of Holy Father, like the role of any father, is such that he really was alone, and now he’s a model of heroic virtue – a real one.

Let me be clear: I don’t mean to disparage the men in the video – they’re probably great guys – nor do I mean to make fun of those men who are part of such a group and perhaps get something out of it.

Even before my eyes were opened to the errors of conservatism, the manly men movement in the Church has always made me uncomfortable. It seems contrived to me; with way too much rah rah, let’s go men pep talking that rings a little hollow. Something is off the mark.

The idea of men gathering together in a weekly support group to confide their hardships in each other looks to me more like a symptom of the feminist infiltration of the Church than it does a real remedy.

Call me what you will, but a support group strikes me as a far more fitting way for women to cope with their issues than men.

It also strikes me as rather Protestant.

Look, it makes sense for Protestant men to get together in support groups like Promise Keepers to encourage one another in being good “Christian” men.

Because spiritually speaking they have no fathers.

The heretical communities are made up of a bunch of laity – children with Bibles. Sure, some of them go to Bible College to get a meaningless degree, only to come back to the community to tell the others lies about the Eucharist and the priesthood and Blessed Virgin Mary.

They have no fathers, and so the best they can do is “fellowship” together in search of a replacement to fill the void, because we need fathers.

Getting back to the video: One of the truths contained in it is that we don’t learn manhood from books.

That’s the truth; we primarily learn it from good father figures, and one of the places Catholic men learn how to be good Catholic men, is from their spiritual fathers – the sacred pastors with which Christ endowed His Church.

And this brings us to the real reason there are so many emotionally driven, weak and spineless men in the Church today.

Everywhere we look we see men who are followers more concerned with being popular than leaders committed to being faithful. Men who are more inclined to seek consensus than to make tough decisions. And men who are far more willing to tolerate offenses against their family and to seek compromise than to stand up and fight for what is right and good and true.

My friends, in case you haven’t noticed, this describes overwhelming majority of our sacred pastors, and especially our bishops, to a tee.

As the video states very well: A man – a real man – is willing to die to protect his family; to protect what is precious to him.

So, having watched the Diocese of Phoenix video, one may well ask, how willing is Bishop Olmsted – not to die, God forbid, but only just to invite a little bit of scorn in order to protect his family?

At this I want to show you another short video clip; this one from May of 2015 at an event in Phoenix hosted by the so-called “John 17 Movement.”

This is a group of ecumenically driven Protestants who think that it’s necessary for all of us to labor for the unity for which Jesus prayed – a unity that has always been, and always will be, a mark of the Catholic Church alone.

Look at how he addresses a people who refuse to honor Our Blessed Mother with the veneration that she alone among creatures is due; boldly claiming that she’s an ordinary sinner and denying her perpetual Virginity. The list of offenses goes on and on.

Take a look, and tell me if you see a model of manliness:

I don’t mean to pick on Bishop Olmsted. He’s just one of thousands of spineless bishops, but he also happens to be the bishop behind this highly produced video calling men into battle.

When has Bishop Olmsted, or any other bishop like him, ever called Barack Obama or any other world leader who thumbs his nose at Divine Law to account for their obligations toward Christ the King?

When has he ever proclaimed the Catholic faith as the one true religion established by God and the solitary Ark of Salvation?

When has he ever denounced those who insist that Jesus Christ is no more than a man?

If Bishop Olmsted or any other bishop wants men to go “into the breach” like true soldiers for Christ, willing to lay down their lives for what is truly precious, they better be willing to do the same.

The sad truth is folks, there aren’t even a handful of bishops in the Catholic Church today who are willing to lead the family entrusted to them like real men. Not even a handful.

Cardinal Raymond Burke, for all of his good points, isn’t necessarily among that small handful.

His interview will be the topic of my next video.

Watch A Call to Battle in its entirety.