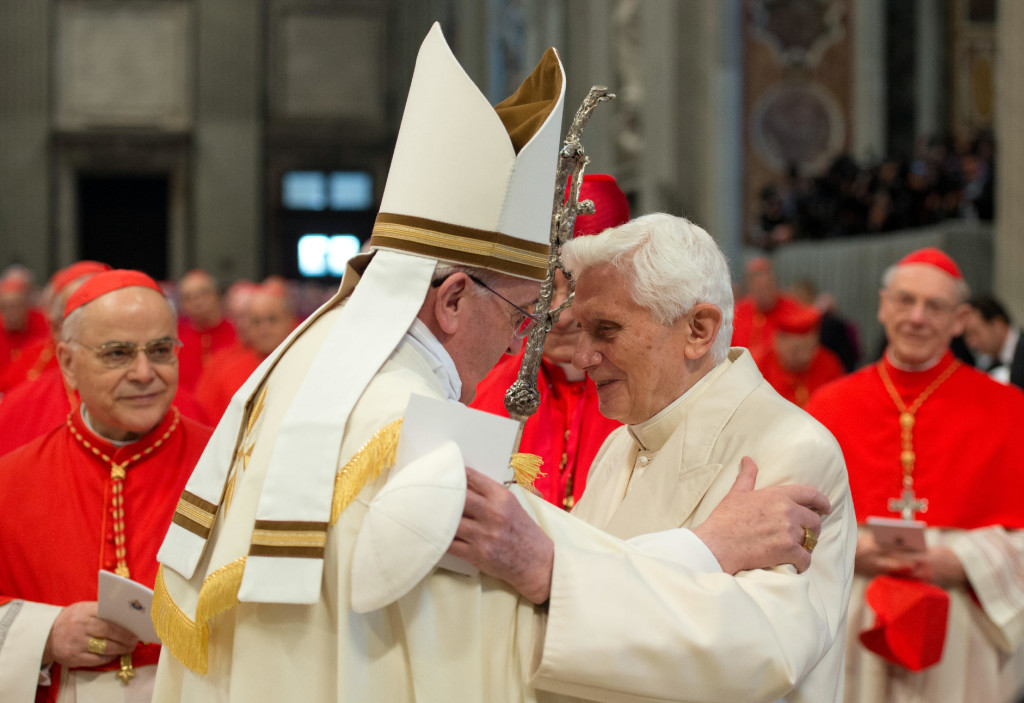 On Saturday, Francis made the return flight from Bangladesh to Rome, and as is his custom, he answered questions from a number of journalists while en route.

As Bergoglian in-flight press conferences go, this one isn’t especially noteworthy overall, but it does contain at least one exchange that merits our attention.

Here we have the quintessential pitch tossed directly over the middle of the plate, belt high (for you baseball fans).

Clearly, the questioner is already a devoted Bergoglian (that, I suppose, is how one gets a boarding pass in the first place) based on his assumption that one must choose between either evangelization or peace.

In fact, the question could easily have been written by Jorge from Argentina.

In any case, Francis’ answered:

First a distinction: to evangelize is not to proselytize.

To “proselytize” is to actively seek after proselytes; that is, converts, in the present case, to the Holy Catholic faith.

For a definition of “evangelize,” just to make it interesting, let’s turn to the Second Vatican Council User Manual otherwise known as the “Catechism of the Catholic Church.” It states:

…the Church still has the obligation and also the sacred right to evangelize all men … the Church, in obedience to the command of her founder and because it is demanded by her own essential universality, strives to preach the Gospel to all men. “Go therefore and make disciples of all nations, baptizing them in the name of the Father and of the Son and of the Holy Spirit, teaching them to observe all that I have commanded you; and Lo, I am with you always, until the close of the age.” (cf CCC 848, 849)

To evangelize all men is to Baptize the nations; that is, to bring them into the life of the Holy Catholic Church; i.e., make converts.

So, even according to the CCC, evangelization is proselytism.

Be that as it may, Francis continued:

The Church grows not by proselytism, but by attraction, that is by testimony. This was said by Pope Benedict XVI.

This was said by Benedict XVI?

While it may come as a shock to many a neo-conservative, Francis is correct.

For instance, in 2007 in Brazil, while addressing the bishops of Latin America and the Caribbean, Benedict said:

The Church considers herself the disciple and missionary of this Love: missionary only insofar as she is a disciple, capable of being attracted constantly and with renewed wonder by the God who has loved us and who loves us first (cf. 1 Jn 4:10). The Church does not engage in proselytism. Instead, she grows by “attraction”: just as Christ “draws all to himself” by the power of his love, culminating in the sacrifice of the Cross, so the Church fulfils her mission to the extent that, in union with Christ, she accomplishes every one of her works in spiritual and practical imitation of the love of her Lord. [Emphasis in text published by the Holy See]

Let’s break this down, shall we.

The Church is missionary only insofar as she is a disciple.

So many Catholic words; it must be true! Right?

That the Church is a “disciple” is the necessary presumption from which the conclusion – “the Church does not engage in proselytism” – naturally flows.

Both, however, are false.

The word “disciple” comes from the Latin discipulus, meaning, one who learns. Individually, all of us, even the popes, are disciples inasmuch as we are “students” at the knee of Holy Mother Church.

But can we say that Holy Mother Church herself is a disciple?

The Church has been endowed with the fullness of truth, and while her members up to and including her head on earth appropriate that truth more deeply in time, the Church herself is not, properly speaking, a “disciple;” rather, she is One, Holy, Catholic and Apostolic.

An “apostle” is one who is sent.

In truth, the Church is missionary only insofar as she is an Apostle; not a disciple.

This brings us back to the mission that Christ gave to His Church as cited even in the CCC:

Go therefore and make disciples of all nations, baptizing them in the name of the Father and of the Son and of the Holy Spirit, teaching them to observe all that I have commanded you… (Mt. 28:19-20)

Our Lord did not send His Church forth to learn, but rather to teach.

Notice that Benedict XVI – the pope of the good ol’ days before Francis – effectively abrogated this crucial part of the missionary mandate.

From there, insisting that the Church does not proselytize is but the next logical step.

The Church grows by attraction.

This is the Council speaking – there is no need to condemn error, a fundamentally necessary part of teaching truth; rather, the truth will attract converts like metal filings to a magnet.

Fallen mankind is attracted to sin; he stands in need of grace and a Holy Mother, who dispenses it while teaching with authority in the name of Christ, to guide him.

This in imitation of the love of her Lord.

This is perhaps the most audacious claim made by Benedict in the citation above.

Our Lord taught constantly, He condemned error with firmness, and He plainly called men to conversion.  In other words, He proselytized.

Francis, for his part, went on to elaborate on what it means to create converts by attraction; recounting the following:

In the lunch I had with young people on the Youth Day in Krakow – about fifteen young people from all over the world – one asked me this question: “What should I say to a university friend, a friend, good, but who is atheist? What should I tell him to change him, to convert him?”

The answer was this: “The last thing you have to do is say something. You live your Gospel, and if he asks you why you do this, you can explain why you do it. And let the Holy Spirit attract him.”

Sometimes, it is true, the best that we can do individually, in service to the mission of the Church, is to live out our faith with conviction in deeds as opposed to words.

Note well, however, that Francis, as well as Benedict before him, believes that this is also true of Holy Mother Church; in other words, they believe that “the last thing they have to do” is to speak in her name with the authority of Christ.

For them, apparently “the Church” is thoroughly human; ever the disciple in pursuit of truth who dares not behave, either by word or by deed, as if she is the Mystical Body of Truth incarnate.

Ultimately, this manner of thinking is the fruit of a Christological heresy that casts doubt on the Divinity of Christ; a heresy that is hinted in the words of Benedict, “The Church does not engage in proselytism.”

In conclusion, while Francis has upped the rhetoric in declaring proselytism “solemn nonsense,” and has cast unprecedented doubt on the Divinity of Christ, make no mistake; he’s simply following in Benedict’s footsteps.