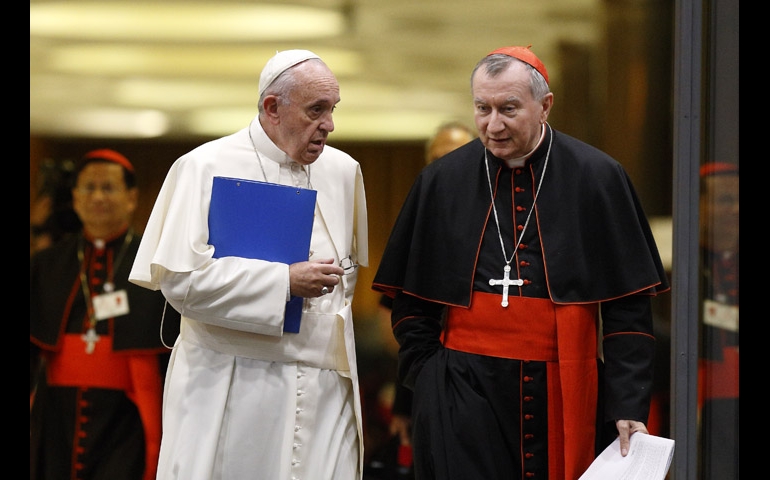 The big “breaking” news item over the weekend is that the guidelines produced by the bishops of Buenos Aires for the implementation of Amoris Laeitia, along with the infamous letter of Francis approving of the same, have been published in the Acta Apostolicae Sedis (AAS).

The Vatican has confirmed that these documents were entered into the AAS by explicit order of His Humbleness via a “Papal Rescript” (so-called) that was addressed to Cardinal Secretary of State Pietro Parolin in June 2017.

Though few need to have their memories refreshed, the crux of the matter is simple:

The aforementioned guidelines interpret Amoris Laetitia as allowing for admission to Holy Communion those who persist in an objectively adulterous relationship and are unwilling to “live in continence.”

In response to this, Francis’ letter states, there are “no other interpretations.”

According to many Catholic commentators, that these texts have been published in the AAS is of major significance.

Church Militant, for example, stated that the importance of this move “cannot be underestimated” [sic] in that it “elevates the referenced documents to the level of ‘authentic Magisterium.’”

Rorate Caeli made a similar declaration, informing readers that “AAS upgrades Pope Francis’ private letter to the Buenos Aires bishops to the official magisterial status of an ‘Apostolic Letter.’” [Emphasis in original]

One Peter Five suggested that publication in the AAS confers “an official, and at least quasi-authoritative status” to the documents.

As for whether or not this makes them “authentic magisterium,” they chose to consult Dr. John Joy, a “specialist in Magisterial authority”:

“It means that it is an official act of the pope,” Joy said, “rather than an act of the pope as a private person. So it cannot be dismissed as a merely private endorsement of their implementation of AL. It is an official endorsement. But this doesn’t necessarily mean that the letter to the Argentine bishops is itself magisterial” and thus requiring religious submission of will and intellect. Such a requirement, Joy said, would only apply if the document intended to teach on matters of faith and morals.

Inasmuch as the letter was in praise of pastoral guidelines that were anything but concrete, this seems unlikely.

Let’s stop here for a moment to see if we can make either heads or tails of these claims.

According to Dr. Joy’s manner of thinking, prior to its publication in the AAS, Francis’ letter concerning the interpretation of Amoris Laetitia could reasonably have been dismissed as the mere endorsement of “a private person.”

Isn’t this kind of like writing a doctoral dissertation and having your defense dismissed by the university’s review board as merely your private opinion concerning what the dissertation intends to state?

It would seem that our “specialist” is unaware of the signature on Amoris Laetitia.

In other words, Amoris Laetitia is Franciscus’ text. As such, he is eminently qualified to say what it means; whether he does so as a “private person” or otherwise makes no difference.

More noteworthy still is Dr. Joy’s implication that pastoral guidelines do not have a doctrinal character; more specifically, that they do not “teach on matters of faith and morals.”

This, as most readers of this space most certainly recall, was one of the central arguments put forth by the Kasperians heading into both of the Synods.

Dr. Joy pointed out that adding the letter to the AAS could, in fact, damage the credibility of Amoris Laetitia by potentially removing the possibility that it could be interpreted in an orthodox way through establishing, via its publication in the official acts of the Apostolic See, that the unorthodox interpretation is the official one.

Yes, you read that correctly: the credibility of Amoris Laetitia – a document that plainly insists that the Divine Law is impossible for some persons to keep, that adultery doesn’t constitute a state of mortal sin even for those who know better, and what’s more, that God Himself desires that they should persist in such situations.

And yes, you also read correctly – Francis’ insistence that “there are no other interpretations” of Amoris Laetitia only “potentially removes the possibility that it could be interpreted in an orthodox way.”

I’m sure Dr. Joy means well, but the biggest question his commentary raises is why anyone would bother to quote him as an expert.

In any case, there you have it – just a few reactions to this weekend’s “big” news story:

Its importance cannot be overestimated, it upgrades the documents’ contents to magisterial status, it makes them an “official” act of the “pope” as opposed to that of a private person…

At this, I would remind those who think that publication of these texts in the AAS is a game-changer that Amoris Laetitia was published therein long ago.

The game is largely unchanged since April 8, 2016 – the day Amoris Laetitia was made public. The objective sense of that text is plainly blasphemous and heretical. Period. As such, no one will ever owe “assent” to that unholy screed; “religious” or otherwise.

Furthermore, there has never been any reason whatsoever to imagine that Amoris Laetitia itself is anything other than an “official” act; one that Francis most certainly intends to be received as “authentic magisterium” and not  as mere personal opinion.

As for the Buenos Aires guidelines and Francis’ letter, these are but icing on a putrid cake.

If this latest “development” – if it even qualifies to be called that – is helping the scales fall from certain eyes, or otherwise encouraging the timid to speak plainly, great, but don’t make too much of it.

Jorge Bergoglio is a heretic; notorious, formal, pertinacious, and that, my friends, is hardly breaking news.

Please forgive the repetition, but I have no other choice: We need your help!