Home
Blog Post
O’ papal cart, where are thy wheels? 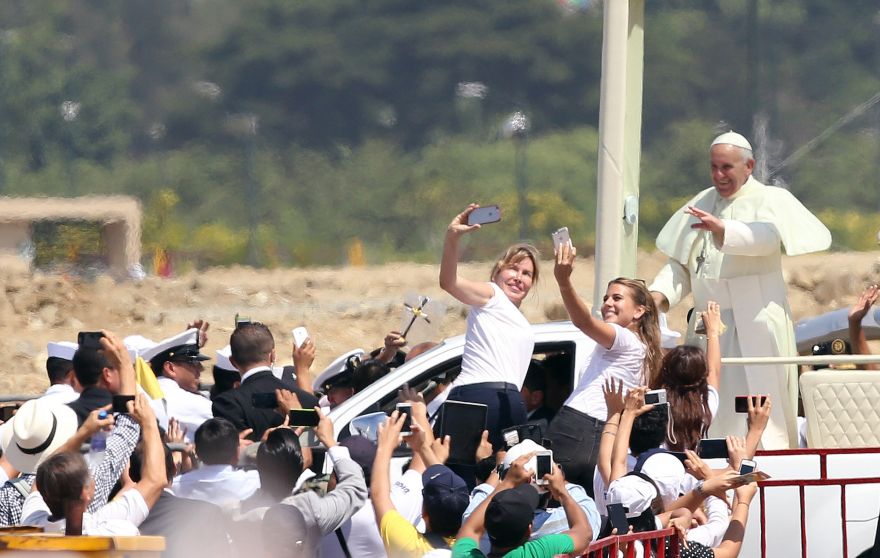 A note released by the Holy See Press Office says that the Pope has expressed his closeness to the Greek people who are suffering the effects of the current crisis.

Describing the news from Greece “regarding the economic and social situation of the country as worrying”, the Pope “conveys his closeness to all the Greek people, with a special thought for the many families gravely beset by such a complex and keenly felt human and social crisis”.

“The dignity of the human person must remain at the center of any political and technical debate, as well as in the taking of responsible decisions” the Pope continues.

Concluding, Pope Francis invites all the faithful to “unite in prayer for the good of the beloved Greek people”.

And yet, as of this moment, Pope Francis still hasn’t commented on recent events in Ireland and the United States and the crisis being faced by the citizens (especially Catholics) in these nations where so-called “gay marriage” has been designated a “right.”

No one who has been following this pontificate closely can be the least it surprised, of course, but let’s be honest; the longer the dreadful reign of Francis goes on, the more it becomes evident that the problem runs far deeper than just a matter of disordered papal priorities.

In other words, faithful Catholics are not simply struggling to interpret the words and deeds of a pope who has an unorthodox approach to his office as the neo-conservative papal defenders would have us believe; rather, we’re suffering under the reign of a pope whose bedrock convictions are scarcely recognizable as Catholic.

This is so much the case that liberals, conservatives and traditionalists (aka Catholics) alike would be flat out shocked if Pope Francis were to suddenly begin speaking and acting in such way as to place an emphasis on man’s spiritual well-being and his supernatural ends.

As it is, Francis is focused to the point of obsession, first and foremost, on material poverty, and secondly, on an earthbound sense of peace (better understood in terms of the absence of strife).

An objective assessment of the entirety of Jorge Bergoglio’s words and deeds since assuming the papacy would clearly reveal that the salvation of souls isn’t even a distant third on his list of priorities!

The pre-conciliar popes, by contrast, provided the proper context in which such matters are to be framed:

Neither must it be supposed that the solicitude of the Church is so preoccupied with the spiritual concerns of her children as to neglect their temporal and earthly interests. Her desire is that the poor, for example, should rise above poverty and wretchedness, and better their condition in life; and for this she makes a strong endeavor. By the fact that she calls men to virtue and forms them to its practice she promotes this in no slight degree. Christian morality, when adequately and completely practiced, leads of itself to temporal prosperity, for it merits the blessing of that God who is the source of all blessings… (cf Pope Leo XIII, Rerum Novarum 28)

When once men recognize, both in private and in public life, that Christ is King, society will at last receive the great blessings of real liberty, well-ordered discipline, peace and harmony. (cf Pope Pius XI, Quas Primas 19)

Pope Francis has a different view; so different that one can hardly be blamed for wondering if it’s not a different faith.

In a speech to economists gathered in Rome from all over the world, for example, Pope Francis called on them to create an “economy of inclusion” by placing man “at the center: to the center of society, the center of thoughts, the focus of reflection. He is the king of the universe!”

Just to be clear, “he” refers here to man (for those who tend to read things through a Catholic lens).

His approach to peace is no better.

One may recall, for example, the abomination that took place on Pentecost 2014 wherein the pope gathered with Jews and Muslims to plant a tree in the Vatican gardens, but only after the latter was given an opportunity to chant a prayer from the Qur’an calling for victory over the infidels.

The situation is so out of hand at this point that it’s no longer just “traditionalist” bloggers questioning the pope’s Catholicity.

Speaking at the March for Life in Rome in May, Fr. Linus F. Clovis, a priest of the Archdiocese of Castries, St. Lucia in the West Indies, for instance, excoriated the pope and his effect on the Church, saying:

When a bishop — a Catholic bishop — can applaud sin publicly, it causes us to tremble. But this is essentially the ‘Francis Effect.’ It’s disarming bishops and priests, especially after the Holy Father said, ‘Who am I to judge?’ I as a priest say Mass, preaching, and I make a judgment about a sin, one breaking the ten commandments, I would be condemned for judging. I would be accused of being ‘more Catholic than the pope’. There used to be a saying — rhetorical — ‘is the pope Catholic?’ That’s no longer funny.

Fast forward to this past Sunday when Pope Francis said in his homily delivered in Guayaquil, Ecuador:

Shortly before the opening of the Jubilee Year of Mercy, the Church will celebrate the Ordinary Synod devoted to the family, deepen her spiritual discernment and consider concrete solutions and help to the many difficult and significant challenges facing families today. I ask you to pray fervently for this intention, so that Christ can take even what might seem to us impure, like the water in the jars scandalizing or threatening us, and turn it – by making it part of his “hour” – into a miracle. The family today needs this miracle.

It’s so entirely obvious that the pope is looking for the Synod to find “concrete solutions” for families embroiled in adulterous and homosexual relationships, as if the Catholic solution (conversion and repentance) is less than adequate, that Vatican spokesman Fr. Federico Lombardi had to issue a statement denying it.

Folks, the wheels are quickly coming off the papal cart, and I for one am grateful.

With every passing day, as Pope Francis demonstrates all the more clearly that neither he nor the church-of-man that he intends to build are reasonably considered Catholic, the more those laity, priests and bishops who feel compelled to come to his defense, or choose to ignore the peril altogether, reveal themselves as those who have likewise lost the Faith.

Sure, it’s painful to witness, but we need to know who the wolves are, and this pontificate is shining a light on them.

As such, I am looking forward to seeing exactly what the “God of Surprises” (also known as the humble Pope Francis), has in store for the Synod in October.

No matter the outcome, if nothing else, we’ll come away with a better understanding of who does, and who does not, stand with Christ.

Diocese of Pittsburgh gives up on search for Baptist communications director

And the Academy Award for Best Film Editing goes to…