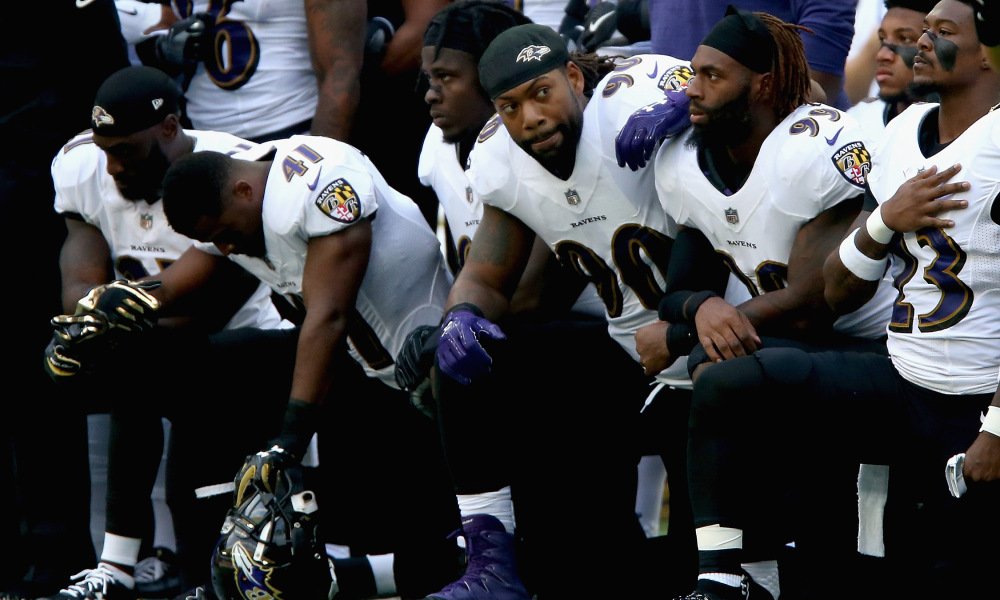 One of the stories dominating secular media over the past several days concerns the growing number of NFL players who refuse to stand for the U.S. National Anthem.

This is rather different than “taking a knee;” an action which might be mistaken as an expression of deference.

To be very clear, in the present case, at issue is that which is being withheld; not what is being given.

In a nation already deeply divided, two camps have emerged, roughly speaking; each one laying claim to the mantle of patriotism.

On one side, there are those who are offended by what they see as a show of disrespect – for the flag, for the nation, and for its citizens at large; in particular, those who currently serve, or have served, in the armed forces.

On the other side are those who view the matter primarily in terms of “freedom of speech;” asserting that their understanding of the situation is thus eminently patriotic.

Among this latter group are even persons who don’t necessarily find the protesters’ most basic premises convincing; namely, that police brutality and racial inequality are prevalent in the United States – claims lost amid the anti-Trump hysteria.

As it is often said in this country, “I don’t believe in what you’re saying, but I will defend your right to say it.”

Let’s take a closer look at the situation through the lens of Catholic tradition; i.e., reality.

The discord in this case is animated by a certain tension that has arisen between rights and duties; at least insofar as they are largely perceived.

Properly understood, rights and duties are never truly opposed to one another, but rather do they harmoniously coexist, and it is only in the degree to which each is given its due that society will come to realize authentic peace and harmony.

It should perhaps go without say, but clearly it must be admitted that the very concept of duty is rather unpopular in our culture; with demands for so-called “rights” being so commonplace as to strip the word of any real meaning.

But let’s not get ahead of ourselves…

So, what comes first; a citizen’s duty to honor his country, or his right to free speech?

Let’s begin with an examination of the latter.

Far from being viewed as merely a civil right or a constitutional matter, churchmen in our day often cite freedom of speech as if it were a religious precept.

One of the greatest and most prized things about our country has been our dedication to free speech and open, honest discussion and debate about issues and policies. Unfortunately, that has been eroding over the past few decades.

After documenting various efforts on the part of the political left to suppress the dissemination of opposing views, he then implied that the concept of free speech is tantamount to an article of faith, saying:

As Catholics, this should alarm us because it touches on religious liberty.

Msgr. Pope is referring, of course, to the Second Vatican Council’s concept of religious liberty; one modeled after the pluralistic U.S. Constitutional approach whereby false religions are placed on the same level as the one true faith established by Jesus Christ.

Much has been written in this space demonstrating that this view of so-called “religious liberty” is in no way compatible with authentic Catholic doctrine. I invite you to search for and read those articles if you’ve not already.

Many of today’s politically required views run counter to our moral and doctrinal teachings. These teachings have not changed for thousands of years; until about twenty years ago these positions were held by most Americans. We Catholics sincerely believe them to be revealed by God Himself and firmly rooted in both the Bible and Natural Law.

The error here is subtle, but it is an error nonetheless, and it is simply this:

The difference is substantial.

According to Msgr. Pope’s presentation of the “free speech” approach, we have a right to proclaim the things that we sincerely believe. Why? Because we have religious liberty, and the State is obligated to honor it.

According to a fully Catholic understanding of the matter, by contrast, we have a duty to proclaim those moral and doctrinal teachings that have been revealed by God. Why? Because He is God!

What’s more, the State has a duty to order its affairs according to those very same teachings and for the very same reason.

At this, let us now turn to the wisdom of the Angelic Doctor for greater insight into the matter of patriotism:

Man becomes a debtor to other men in various ways, according to their various excellence and the various benefits received from them. On both counts, God holds first place, for He is supremely excellent, and is for us the first principle of being and government. On the second place, the principles of our being and government are our parents and our country that have given us birth and nourishment. Consequently man is debtor chiefly to his parents and his country, after God. Wherefore just as it belongs to religion to give worship to God, so does it belong to piety, in the second place, to give worship to one’s parents and one’s country. (Aquinas, Summa Theologiæ, II-II, Q1, A1)

In this brief treatment touching on a proper understanding of patriotism, otherwise known as piety for one’s country, St. Thomas reiterates the indispensable key several times:

God holds first place… He is the first principle… Man is debtor to others, including his country, but only after God…

As mere creatures, more than anything else, we stand before the Creator, both as individuals and as nations, as those who are duty bound first and foremost.

We find this truth reflected in the inaugural Encyclical of Pope Pius XI, Ubi Arcano Dei Consilio, wherein the Holy Father described patriotism as “the stimulus of so many virtues and of so many noble acts of heroism,” but only insofar as it is “kept within the bounds of the law of Christ.”

Otherwise, Pope Pius explained, it can become an “incentive to grave injustice.”

Indeed, the first demand of justice (that is, rendering to others their due) is that we grant unto God the worship, the reverence, the gratitude, the obedience, etc. that He is owed simply because of who He is.

Whatever authentic rights we may enjoy as creatures come to us from Him, and they can only be fully comprehended, realized and exercised in relation to Him, and this includes any claim to freedom of speech.

At this, let’s return to the question at hand, asking it another way:

Is it more patriotic to lay stress on one’s duty to demonstrate piety toward one’s nation, or one’s right to freely express oneself in an effort, well-conceived or not, to better one’s nation?

The answer is neither.

Missing not only from the current debate, but from the guiding principles outlined in the U.S. Constitution (as explored in some detail HERE and elsewhere in this space) is precisely what St. Thomas Aquinas and Pope Pius XI stressed.

Our failure as a nation to acknowledge the primacy of God and the Law of Christ has created a society wherein man has turned, not only against his neighbor, but against himself; even to the point where our civil laws literally promote extinction by way of so-called “rights” to abortion and gay marriage.

Professional athletes who refuse to demonstrate piety toward their own nation, as they most certainly should, and the controversy that has ensued, are but symptoms of a much graver evil:

God is not, and never has been, our first principle in this nation; rather, “We the People” have anointed ourselves as such.

With the very Source of authentic unity thus denied, of course we are a nation divided.

Should NFL players stand for the National Anthem as an expression of piety for their country, the one they claim to love and wish to improve?

But unless we as a nation learn to kneel before God – and that means willingly submitting to the “sweet and saving yoke” of Christ the King, staying within the bounds of His Law, and rendering unto Him all that He is due – we will continue to hurtle toward our demise.

Novus Ordo: A diversion from Christ the King