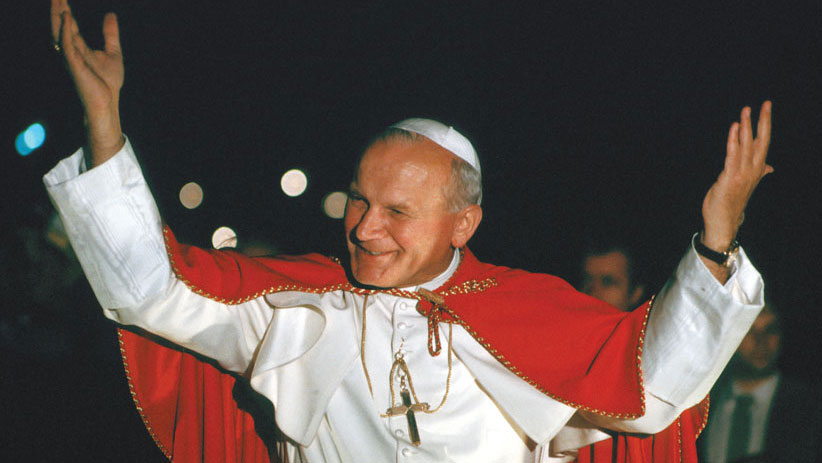 “The real revolution there happened under John Paul II, not Francis, which hasn’t really yet been understood,” said Archbishop Vincenzo Paglia.

While apologists for recently canonized Pope John Paul II scramble to defend the late Pontiff for the apparent exploitation of the Pontifical Institute for Studies on Marriage and Family that bears his name, a closer look at their rationale is guaranteed to raise eyebrows. However, the stunned reaction might not be at the audacity of their claims, but the coherence of their explanations.

Archbishop Paglia taps into one of Pope John Paul II’s most ubiquitous themes: consciousness, or “awareness” of the Church:

The Institute “couldn’t just stay like it was,” Paglia said, because of changes “both in the awareness of the Church and also the social, cultural and anthropological conditions of the world.”

About which awareness Pope John Paul II taught in his inaugural and programmatic encyclical:

Entrusting myself fully to the Spirit of truth, therefore, I am entering into the rich       inheritance of the recent pontificates. This inheritance has struck deep roots in the awareness of the Church in an utterly new way, quite unknown previously, thanks to the Second Vatican Council… (Redemptor hominis) [Emphasis added]

Changes? Why of course! In the Wojtylian cosmos, all things are evolving. Who could forget the way the international media leapt upon his address to the Pontifical Academy of Sciences on 22 October 1996 when he affirmed:

…some new findings lead us toward the recognition of evolution as more than an hypothesis.  In fact it is remarkable that this theory has had progressively greater influence on the spirit of researchers, following a series of discoveries in different scholarly disciplines. The convergence in the results of these independent studies—which was neither planned nor sought—constitutes in itself a significant argument in favor of the theory.

Surely this is at least ‘an’ explanation of the Pope’s reliance on the novel theory of a “living Tradition” from which he found the missionary Archbishop Marcel Lefebvre wanting in his ‘deficient’ understanding of Tradition (see: motu proprio Ecclesia Dei Adflicta).

This is evident in the two ways to perceive the pontificate of Karol Wojtyla. The overwhelmingly popular vision of John Paul II is the crusading evangelist, traversing the globe to proclaim the Gospel of Christ to all men while collaborating with world leaders to bring down the Iron Curtain.

The other way is to actually examine his words and deeds against the backdrop of Catholic Tradition, which yields some unwelcome if not disturbing conclusions.

The dominant theme of John Paul II’s long pontificate was that by His incarnation, Christ has united Himself to each man forever. He found this novel understanding of the Gospel in Vatican II’s Gaudium et spes (Pastoral Constitution on the Church in the Modern World) #22, which is erstwhile known as “the mystery of man.”

Through this mystery – completely unknown in Catholic Tradition before 1965 – Christ reveals “man to man himself.” This revelation is that each and every man is formally, ontologically, and eternally united to the Second Person of the Holy Trinity.

You have to remember that before [Familiaris Consortio], it wasn’t that the divorced and remarried just couldn’t get Communion, it was they were practically excommunicated and expelled. They were outsiders. After John Paul, everybody was inside the house … I can’t just send them out on the terrace! [Emphasis added]

“Everybody was inside the house” of course refers to the new ecclesiology of Vatican II’s Lumen gentium where the Church and mankind are dangerously conflated in ambiguous language and is buttressed by this doctrine of universal union of each man with Christ via the Incarnation.

Now, if everybody is inside the house, who can be excluded from the supper table? Thus, Pope Francis is announced as the authoritative interlocutor of this revolution of John Paul II’s that hasn’t really been understood yet:

He [Paglia] said that Pope St. John Paul II began the “revolution” in the Church for Communion for the divorced and remarried, and that Pope Francis is carrying this on as the saint’s “best interpreter.”

In the vision of an evolving cosmos in which each man is united to Christ forever, how can we mere laymen ever hope to apprehend such an exalted idea without Pope Francis pulling away the veil that the consciousness of the Church was not ready for prior to his Pontificate?

Nor are we to set aside Pope Wojtyla’s bizarre understanding of each religion being a vehicle for union with God and inspired by the Holy Spirit:

It must first be kept in mind that every quest of the human spirit for truth and goodness, and in the last analysis for God, is inspired by the Holy Spirit. The various religions arose precisely from this primordial human openness to God. At their origins we often find founders who, with the help of God’s Spirit, achieved a deeper religious experience. Handed on to others, this experience took form in the doctrines, rites and precepts of the various religions. In every authentic religious experience, the most characteristic expression is prayer. Because of the human spirit’s constitutive openness to God’s action of urging it to self-transcendence, we can hold that “every authentic prayer is called forth by the Holy Spirit, who is mysteriously present in the heart of every person” (Address to the Members of the Roman Curia, 22 Dec. 1986, n. 11; L’Osservatore Romano English edition, 5 Jan. 1987, p. 7). [Emphasis added]

Here it is well to note at once that, given this doctrine of experience united with the other doctrine of symbolism, every religion, even that of paganism, must be held to be true. What is to prevent such experiences from being met within every religion? In fact that they are to be found is asserted by not a few. And with what right will Modernists deny the truth of an experience affirmed by a follower of Islam? With what right can they claim true experiences for Catholics alone? Indeed Modernists do not deny but actually admit, some confusedly, others in the most open manner, that all religions are true. (Pascendi Dominici gregis) [Emphasis added]

This vision of all men, in all religions united eternally with Christ in an evolving cosmos has of course, certain implications about which the Pope draws very specific conclusions:

Assisi Prayer is a “visible illustration, an exegesis of the events, a catechesis, intelligible to all, of what is presupposed and signified by the commitment to ecumenism and to the interreligious dialogue which was recommended and provided by the Second Vatican Council.”
(Christmas address of the Pope to the Cardinals and members of the Curia on 22 December, 1986, L’Osservatore Romano, 5 January 1987, page 7)

But can we draw such a conclusion as Archbishop Paglia’s based simply on the general themes of Pope John Paul II’s theology and praxis? Has he really done anything revolutionary in the field of Catholic doctrine pertaining to the sacrament of matrimony?

If you ask those who studied his novel ‘Theology of the Body’, the answer will be a profound yes:

George Weigel has described Theology of the Body as “one of the boldest reconfigurations of Catholic theology in centuries.”He goes on to say it is a “kind of theological time bomb set to go off with dramatic consequences, sometime in the third millennium of the Church.” [Weigel, George (October 1999). Witness to Hope (First ed.). Harper Perennial. pp. 336, 343, 853. ISBN 0-06-018793-X.]

Weigel believes that it has barely begun to “shape the Church’s theology, preaching, and religious education” but when it does “it will compel a dramatic development of thinking about virtually every major theme in the Creed.” (ibid.)

Those taking offense at Pope Francis’ teaching in Amoris laetetia because of a perceived opposition to the doctrine laid down by John Paul II in Familiaris consortio should take a deep breath and a long look at the late Pope’s entire body of doctrine.

While others trifle with rearranging the furniture inside the house, John Paul II set in motion the wholesale replacement of the entire foundation.

John W. Proctor has served 24 years in the US Army Chaplain Corps and with his wife Amy has raised four children in the Archdiocese of the Military Services. He holds a bachelor’s degree in Theological Studies and has studied at the Master’s level at Catholic Distance University. He most recently served as a Master of Ceremonies for the Fort Hood, Texas Latin Mass community. He and his family currently serve at Fort Meade, MD and attend Mass at the Shrine of St. Alphonsus Liguori.

Montini vs Bergoglio: Better or worse?