In the last post, I said that comments offered on this blog inspire new posts. Case in point:

My intent in the “new evangelization” post ( That’s what I’m talkin’ about ) wasn’t so much to indict the Holy Father; rather, it was simply to say that he gave us some insight into the mindset of every “new evangelist,” including all of the popes who have occupied the Chair of St. Peter over the last 50 years.

That said, even at this point in the Holy Father’s still nascent pontificate, it seems rather obvious that his evangelical approach to the world, objectively speaking as to its content, is going to be much more like that of John XXIII and his successors than that of any of the pre-conciliar popes.

If we’re honest, we have to admit that the pre-conciliar and post-conciliar approaches to the mission of the Church are nearly as different as day and night. (I am purposely leaving intentions aside since that falls into the realm of the subjective over which none of us can speak with any real authority.)

While the Holy Father would never deny the life-giving nature of the Church, the witness of the last four months indicates precisely what I am suggesting; Pope Francis, like the last five popes that preceded him, hasn’t, and likely won’t, go about evangelizing in a manner that either the Apostles, or any of the pre-conciliar popes, would even recognize as having a hand in the Church’s evangelical mission.

In fact, harsh though it may sound, some of the things these popes have said and done, presumably in the name of the “new evangelization,” including Pope Francis, would have scandalized both the pre-conciliar popes and their respective flocks, and likely invited harsh condemnations.

Examples abound, but since we’re discussing Pope Francis in particular, here are a few that indicate very strongly that his idea of the evangelizing mission of the Church is entirely of the “new” variety; the kind that never really gets around to calling anyone to emerge from their lives of darkness and error into the full light of truth such as it exists in the Catholic Church alone:

– One day after his elevation, while receiving some 6,000 journalists and their families at the Vatican, the pope deliberately chose to refrain from invoking the Blessed Trinity and making the sign of the Cross in an act of blessing as one might reasonably expect the Vicar of Christ to do, in his words, out of respect for the consciences of those non-Christians who were present.

– Upon welcoming the so-called “archbishop” of Canterbury to the Vatican, the pope said he did so “not as a guest or a stranger, but as a fellow citizen of the Saints and the Family of God,” and invited the Anglican to “travel the path towards unity” with him, wherein they might find the “raison d’être of our journey.”

– During his first Apostolic visit (to Lampadusa) the Holy Father greeted Muslims, wishing them well at the start of Ramadan – an observance, according to the Qur’an, that is intended to “magnify” the false god, Allah, of the false prophet, Muhammad – telling them that he has trusts that it will “bear abundant spiritual fruit.”

Each of these three episodes reflect, not just Pope Francis’ chosen approach to the Church’s mission, but the nature of the new evangelization itself. In the process, we discover that the mission has largely been reduced by the “new evangelists” to an exercise in religious diplomacy, a cordial exchange that comforts the practitioners of the false religions with niceties and platitudes that serve only to confirm them in their error.

I cannot say for certain how the practitioners of this “new evangelization” might attempt to justify such a thing as a fitting expression of the Church’s mission. I suspect, however, that they would claim recourse, even if only subconsciously, to the approach inaugurated by John XXIII, and institutionalized at Vatican II, wherein the Church no longer condemns the errors of the heathens and heretics as a means of helping them to see the light of truth; rather, we attempt to “kill them with kindness” in the unrealistic hope that having been wooed by our niceness they will one day feel compelled to consider giving our doctrines a closer look, and might even, God willing, join the team.

What I can say with relative certainty is that beyond the unrealistic hope of inviting conversion in this way, those non-Catholics who were exposed to the Holy Father’s words and deeds in the three examples provided, did not come away with any sense for the fact that God has so much more to give them than their present condition allows, and that the fullness of these gifts, the very means of salvation, are to be found in the Holy Roman Catholic Church alone.

On the contrary, one can safely say that apart from God’s grace preempting the invitation to religious indifferentism inherent in these episodes, each one came away confirmed in whatever false religion they happen to currently practice. 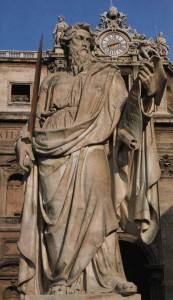 Proclaiming the same unchanging Gospel with new expressions, new methods and new fervor has ever been the evangelizing mission of the Church; i.e, that’s nothing new. In fact, we can say that St. Paul set that tone in speaking of being all things to all people, and yet, he never hesitated to make the call to conversion explicit, even to the point of inviting martyrdom, nor did he ever fail to condemn the utter inadequacy of those religions that cannot save.

The popes of tradition (until the time of John XXIII) evangelized in like manner.

Would any of them recognize the “new evangelization” of the last 50 years as the same unchanging Gospel adapted to our times, or would they join me in saying that the “new evangelists” have so adapted the Gospel to the times as to change the message?