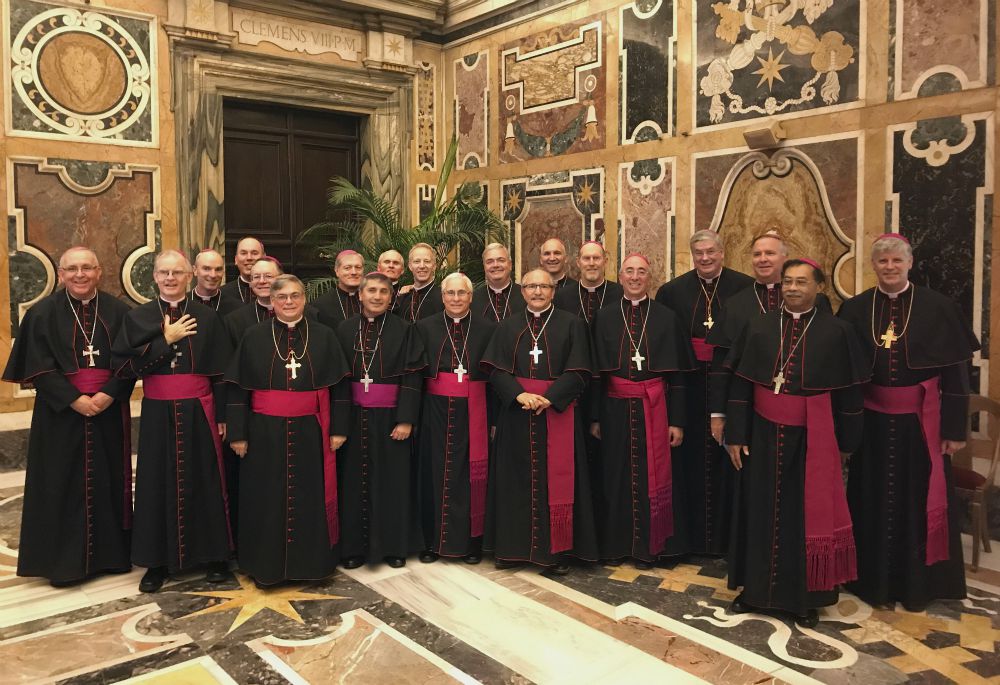 Yesterday, Francis addressed a gathering of newly consecrated bishops on pilgrimage in Rome. In reality, it was a seminar on how to apply the pastoral pearls of wisdom found in Amoris Laetitia.

The theme of the address (available on the Holy See website in Italian) was “discernment,” which, properly understood (i.e., in a Catholic sense), is inseparable from the gifts of the Holy Spirit; wisdom, understanding, counsel, fortitude, knowledge, piety, and fear of the Lord.

The Bergoglian model, not surprisingly, is rather different.

Francis, Vicar of You-Know-Who, began his seminar by paying lip service to the Catholic understanding, but then, in serpentine fashion, he masterfully drew the new bishops’ attention directly to where he really wants it to be – on man; ultimately leading them to believe that discernment is a gift that the sheep bestow upon the shepherd!

Discernment, therefore, is born in the heart and mind of the bishop through his prayer when he contacts people and situations entrusted to him with the Divine Word pronounced by the Spirit. [Emphasis in original]

In other words, it’s the people, stupid.

The bishop, according to Francis, “is not the self-sufficient ‘father,’” rather, he is “called to live his own discernment of Pastor as a member of the People of God at the service of the koinonìa (fellowship).”

Repeatedly throughout the discourse, Francis encouraged… wait for it… “dialogue” – in particular, with the faithful.

The Bishop’s discernment is always a community action, which does not disregard the richness of the opinion … of the People of God … In serene dialogue, he is not afraid to share, and even sometimes change, his discernment with others … with lay faithful , because they retain the “sense of smell” of the true infallibility of the faith that resides in the Church. [Emphasis in original]

It’s not the venerable councils of the Church, Sacred Scripture, or the constant witness of tradition wherein “true infallibility” resides; rather, it is in the people.

From there, Francis grew bolder in cautioning the new bishops not to rely on the aforementioned means by which the true Faith is transmitted, saying:

I therefore invite you to cultivate an attitude of listening, growing in the freedom to give up your point of view … The mission you are waiting for is not to bring your own ideas and projects, nor solutions that are abstractly designed by those who consider the Church a home garden [an expression presumably intended to mean that it supplies all that is needed].

Discerning therefore means humility and obedience … Obedience to the Gospel, the ultimate standard; to the Magisterium, who keeps it; to the norms of the universal Church, which serve Him; and to the concrete situation of people, for whom you want nothing other than to draw from the treasure of the Church as most fruitful for their salvation.

One, the Gospel according to Bergoglio is but the “ultimate standard;” another way of saying (as he did of Christian marriage numerous times in Amoris Laetitia) the “ideal” not infrequently unattainable.

Secondly, notice how the Devil works: Rather than saying, Oh, don’t bother conforming yourself and your flock in obedience to Scripture and Tradition, he tells the bishops that they are bound to obey “the concrete situation of people.”

And what about those times when “the concrete situation of people” is out of step with “the norms of the universal Church”?

Discernment is a remedy for the immobility of “it has always been done this way”… It’s a creative process that does not just apply patterns [applicare schemi – fit into preformed molds]. It is an antidote against rigidity, because the same solutions are not valid everywhere.

Those “same solutions” is a reference to the bi-millennial practice of the Church and the teachings that undergird it, which is presumably why it is so important for the shepherd to turn to the lay faithful for an explanation as to how things ought to be.

It is always, today and forever, the Risen Lord that forces him [the shepherd] not to resign himself to the repetition of the past and to have the courage to wonder if the proposals of yesterday are still evangelically valid.

In other words, make room for the God of Surprises – me!

Do not be imprisoned by the nostalgia of having only one answer to apply in all cases.

There’s much more of the same to be found in the text, but presumably you get the picture.

As the address makes perfectly plain, one of the strategies for ensuring that the Amoris Laetitia disease spreads across not only the globe, but the generations, is to inject newly minted bishops with copious amounts of its virus so they may freely dispense it within their home dioceses.

And the countdown to correction continues…

Humanae Vitae: The problem, not the solution

Francis and the revolution against the Logos