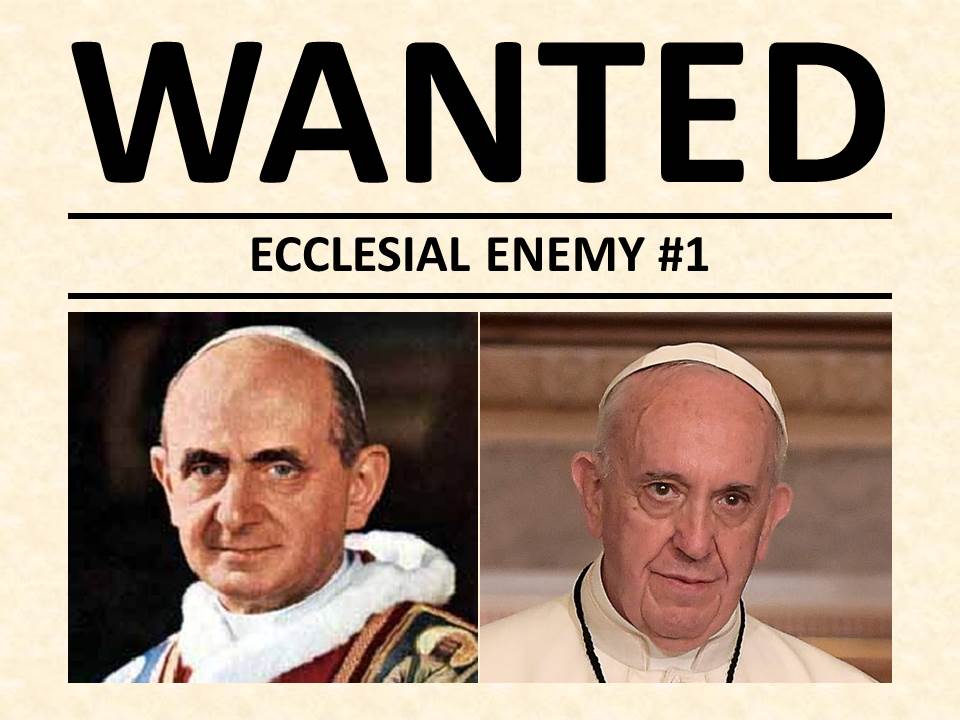 In the interview (published on the Society’s official website as well), Fr. Buzzi, who serves as an assistant to the District Superior of Italy, raises some points worthy of discussion.

When asked for his opinion of Francis, Fr. Buzzi responded:

For us, Pope Francis isn’t any better or worse than the other Popes of the [Second Vatican] Council and the post-Conciliar era. He works “on the same building site” begun by John XXIII, that of the auto demolition of the Catholic Church, to construct another that conforms to the liberal spirit of the world. Actually, I’ll say something further: the current Pope is not as responsible as was Paul VI. This Pope saw the Council through, he finished it, he made all of the reforms. Now, all of this is the cause of the gravest crisis which we see in the Church. Certainly, these actions and words of Pope Francis seem graver than those of his predecessors. But that’s not the case. Today, it’s the media effect that makes things much more evident, than was previously the case.  In substance, however, the actions of Paul VI were much graver than those of Francis.

First, while one notices that Fr. Buzzi prefaces his comments by saying, “For us…” it’s anyone’s guess as to who “us” represents.

In other words, it is not possible to say, much less to confirm with the powers-that-be (as I’ve recently discovered), whether he speaks for the Society as a whole or simply for himself.

Francis isn’t any better or worse than the other Popes of the Council and the post-Conciliar era.

While I wholeheartedly agree that each one of these men bear responsibility for the present ecclesial crisis, I reject the idea that it is shared equally.

Fr. Buzzi apparently isn’t convinced that this is entirely true either as he went on to say:

The current Pope is not as responsible as was Paul VI … the actions of Paul VI were much graver than those of Francis.

I suppose we can all agree that when it comes to ranking popes in terms of damage done to the Church, to souls, and to the world, Paul VI and Francis either share top honors or occupy first and second place; no matter how one might order them.

That said, as it concerns the active promotion of grave errors that undermine Eucharistic piety, doctrinal purity, and Christian morality, a case can be made that Francis is exponentially worse than all of the previous popes combined based upon the damage done by Amoris Laetitia alone.

Indeed, it can be said that Vatican Council II and the Novus Ordo Missae are utterly unique in their offensiveness against the Catholic faith. In fact, if not for them, it’s a safe bet that the likes of Jorge Bergoglio would never have stepped foot on the loggia of St. Peter’s in the first place.

And yet, a distinction must be made.

Properly speaking, the Council and the new Mass, as gravely poisonous as they are, are not in and of themselves synonymous with the present crisis; rather, they set it in motion, or to use Fr. Buzzi’s analogy, they represent “the building site.”

Consider: For many reasons, the pontificate of John Paul II was a disaster in its own right.

Presumably, you get the point.

The same can be said of the pontificates of each of the conciliar popes, even though they stood on the very same “building site” upon which Francis is standing.

Yes, these men erected their own particular monuments in service to the worship of man, and each has much to answer for, but I think it no exaggeration to say that Francis has managed to outdo them all.

Even Paul VI, it seems, would have shuddered to hear it said that God Himself asks us to persist in adultery. (cf Amoris Laetitia – 303)

So, does it really matter which one of these scourges against the Church is considered worse than the other?

Not really. What does matter a great deal, however, is that one does not embrace the utterly false idea that Francis isn’t any better or worse than the other Popes.

The danger of doing so is that it provides an all-too-convenient excuse for failing to address the unique and very grave offenses against the Faith being perpetrated by Francis at this very moment; threatening to lead untold numbers of souls to Hell.

It is, in other words, a cop out to respond simply by saying, “Oh well, the real problem is the Council and the new Mass,” as if this undisputed fact somehow relieves one of the duty to confront Francis’ blasphemies and heresies head on.

Later in the interview, Fr. Buzzi illustrated the point rather well when he was asked to comment on “the doctrinal debate surrounding Amoris Laetitia.”

You’re causing me to repeat myself, with this question. If on one hand, all the initiatives to correct this document and to defend the Christian family (indissoluble and sanctified by a sacrament) have been praiseworthy, the true problem is upstream. Do you know where the root of Amoris Laetitia lie? We find them in the Council document Gaudium et Spes. Therefore, as I said the terrible crisis in the Church is traced back to her DNA, that is, Vatican II.

It’s all well and good to defend the Sacrament of marriage, but Amoris Laetitia isn’t really the problem.

There you have it; the cop out is complete.

The Church and her faithful, members of the sacred hierarchy in particular; indeed everyone who wishes to be numbered among the Soldiers for Christ, have the duty to fight against evil and error on whatever front it may arise.

In other words, we need not choose between engaging the enemy on either  the conciliar front or  the Bergoglian front; we can and must do both.

As I’ve stated many times, Amoris Laetitia is cut from conciliar cloth; it is most certainly a rotten fruit of the Council. (In my view, the theological seeds for Amoris were sown most notably in the Declaration on Religious Freedom, Dignitatis Humanae.)

That realization, however, in no way lessens our duty to condemn Amoris Laetitia and to call its author to account.

In closing, as noted, we cannot know for certain to what extent Fr. Buzzi is providing the mindset of the Society as opposed to just his own personal opinion, but based on recent events, it appears to me that he has just given us at least a glimpse of the former.