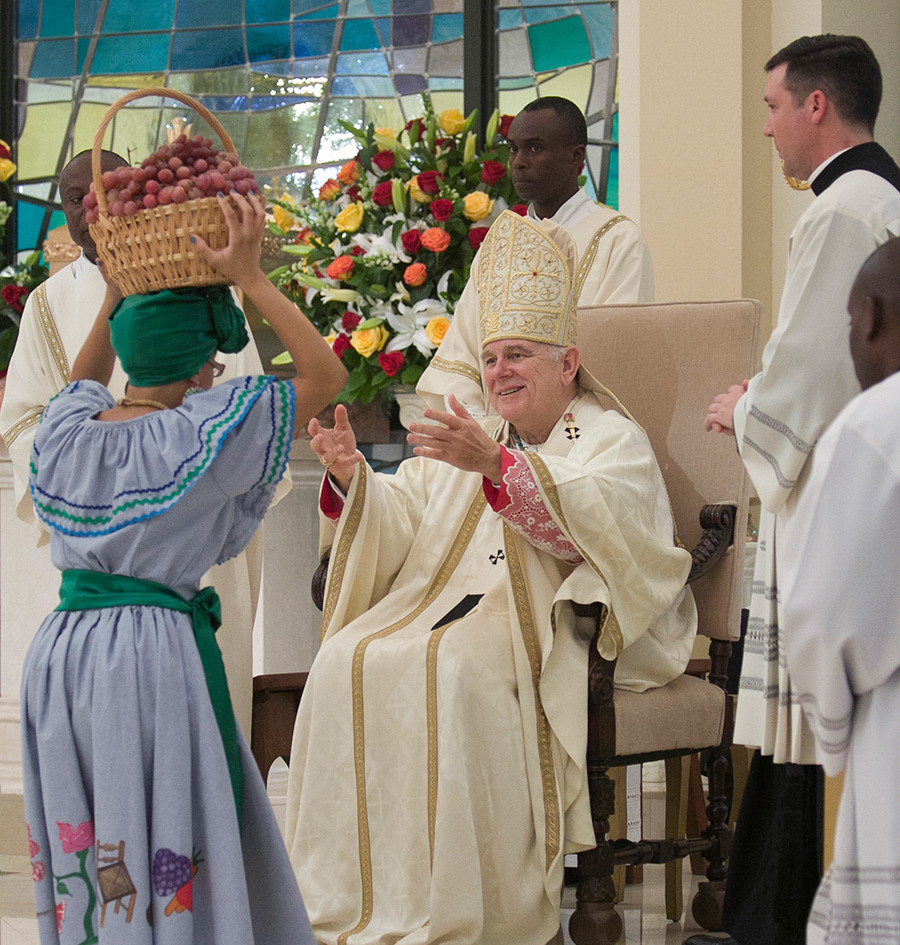 Yesterday, Francis continued his assault (presented as “catechesis”) on the Mass by focusing on “the Eucharistic Liturgy.”

Please allow me to clarify what I mean by assault.

This on-going series of General Audiences is at once an assault on the true nature of the Holy Sacrifice of the Mass, and a thoroughly accurate exposition on the Novus Ordo.

How can this be?

Simple: The Novus Ordo itself is an assault on the true nature of Holy Mass!

Let Francis explain as he offers catechesis on the very heart of the Mass, and he does so by drawing our attention to Jesus Christ, who is both the High Priest and the Holy Sacrifice there present.

He really does so by focusing on… wait for it… man; more specifically, the people of God, the faithful people, and the holy people.

Before we get to that, let’s first consider what Francis has to say for the priest:

The priest, who in the Mass represents Christ (in Italain: rappresenta Cristo)…

In Washington, a congressman represents the citizens of his district.

In court, an attorney represents his client.

At Holy Mass, by contrast, the priest does not “represent” Christ; rather, he acts in persona Christi such that it is truly Jesus Christ who is present and active.

Preaching to the choir here, I know. Forgive me.

Francis zeroes in on his favorite topic, man, saying:

It is good that the faithful present the bread and wine to the priest, because they signify the spiritual offering of the Church gathered there for the Eucharist.

It is beautiful that the faithful bring the bread and wine to the altar.

Underscoring just how indispensable the people truly are in this strange new conciliar world, he went on:

And in this regard it is significant that, in ordaining of a new priest, the Bishop, when he gives him bread and wine, says: “Receive the offerings of the holy people for the Eucharistic sacrifice” (Roman Pontifical – Ordination of bishops, presbyters and of the deacons).

No such nonsense appears in the traditional Rite of Ordination; rather, there we find:

The bishop now presents each of the ordained with a chalice containing wine and water and a paten upon it with a host. The ordained touches with the fore and middle fingers both the paten and the cur of the chalice. During this ceremony the bishop says:

Receive the power to offer sacrifice to God, and to celebrate Masses for the living and the dead, in the name of the Lord …

Later in the Rite, the bishop (in the traditional rite) blesses the newly ordained priests saying:

May the blessing of the almighty God, the Father, the Son, and the Holy Ghost, descend upon you, that you may be blessed in the priestly order, and offer up the sacrifice of propitiation for the sins and offenses of the people to almighty God, to whom be honor and glory forever and ever.

Propitiation for the sins and offenses of the people…

So much for the essential role of the holy and faithful people of God who feature so prominently in the Novus Ordo rite, which, furthermore, makes no mention of the true nature and purpose of the priesthood with respect to the Holy Sacrifice of the Mass.

On this note, Michael Davies wrote:

Every prayer in the traditional rite which stated specifically the essential role of a priest as a man ordained to offer propitiatory sacrifice for the living and dead has been removed. In most cases these were the precise prayers removed by the Protestant Reformers, [e.g., “Receive the power to offer sacrifice to God and to celebrate Mass, both for the living and the dead, in the name of the Lord”] or if not precisely the same there are clear parallels…. Their omission by the Protestant Reformers was taken by Pope Leo XIII as an indication of an intention not to consecrate sacrificing priests.” (Michael Davies, The Order of Melchisedech, pp.82, 86)

Francis states, and again, accurately so as it concerns the lex credendi (that is, the law of what it is to be believed) such as it is transmitted via the Novus Ordo:

The people of God who bring the offering, the bread and the wine, bring the great offering for the Mass!

And here you thought that Jesus Christ – Body, Blood, Soul and Divinity – was the “great offering” of the Mass.

Don’t get me wrong, the bread and the wine are the essential matter of the Eucharistic Sacrifice, but their importance as “offering” isn’t derived from the people who made them (the “work of human hands”), or paid for them, or present them to the priest, but rather it lies in what they become.

As Cardinal Ottaviani and those who assisted him in producing the Brief Critical Study on the New Order of Mass (aka Ottaviani Intervention) observed:

Incidentally, I am not aware of any Novus Ordo parish that makes a point of selecting only Catholics (representative of the “faithful and holy people”) for the so-called “presentation of the gifts.” On the contrary, the ringmasters of that circus become positively giddy when the opportunity to invite a Protestant or a Jew to do the honors presents itself.

In the Eucharistic Prayer we give thanks to God for the work of redemption and the offerings become the Body and Blood of Jesus Christ.

Let’s give credit where credit is due: The man knows his Novus Ordo.

So did Cardinal Ottaviani et al, who observed:

By suppressing the continual reference to God in the Eucharistic prayers, there is no longer any clear distinction between divine and human sacrifice …

Furthermore, in none of the three new Eucharistic Prayers is there any reference, as has already been said, to the state of suffering of those who have died, in none the possibility of a particular Memento: all of this, again, must undermine faith in the propitiatory and redemptive nature of the Sacrifice …

The initial definition of the prex eucharistica [the “Eucharistic prayer” as defined in the General Instruction] is as follows: “The center and culminating point of the whole celebration now has a beginning, namely the Eucharistic Prayer, a prayer of thanksgiving and of sanctification” (no. 54, pr.). The effects thus replace the causes, of which not one single word is said. The explicit mention of the object of the offering, which was found in the Suscipe, has not been replaced by anything. The change in formulation reveals the change in doctrine.

Here, Cardinal Ottaviani refers to the Suscipe Sancte Pater in the Traditional Latin Mass, which in English reads:

Accept, O Holy Father, almighty and eternal God, this spotless host, which I, Thy unworthy servant, offer unto Thee, my living and true God, to atone for my innumerable sins, offenses, and negligences, and for all here present; also for all faithful Christians both living and dead, that it may profit me and them for salvation unto life everlasting. Amen.

This beautiful prayer makes perfectly plain the true nature and purpose of the Holy Sacrifice of the Mass; an abomination to the Protestants.

It is for this reason, presumably, that the architects of the Novus Ordo saw fit to eliminate it entirely (as well as the Offertory); with the “Eucharistic prayers” thus taking on the form of a narrative or retelling of history.

This invites one to adopt the Protestant view of the liturgy as a simple re-creation of the Last Supper, as opposed to the unbloody re-presentation of Our Lord’s Sacrifice on Calvary offered in atonement for sin.

Francis, whether intentionally or not, reinforced this view when he said:

Through the fraction and through Communion, the faithful, though many, receive from the one bread the Lord’s Body and from the one chalice the Lord’s Blood in the same way that the Apostles received them from the hands of Christ himself.

Overall, we should be thankful for these General Audiences as they have served to shed light, not only on the degree to which Francis has not the Catholic faith, but also on the deficiency of the Novus Ordo rite itself; including the Rite of Ordination.

Let’s hope and pray that our neo-conservative friends have been paying attention.

The latest from Rome: One helluva distraction