Read the Oath below carefully and then answer the question: Would you sign it? 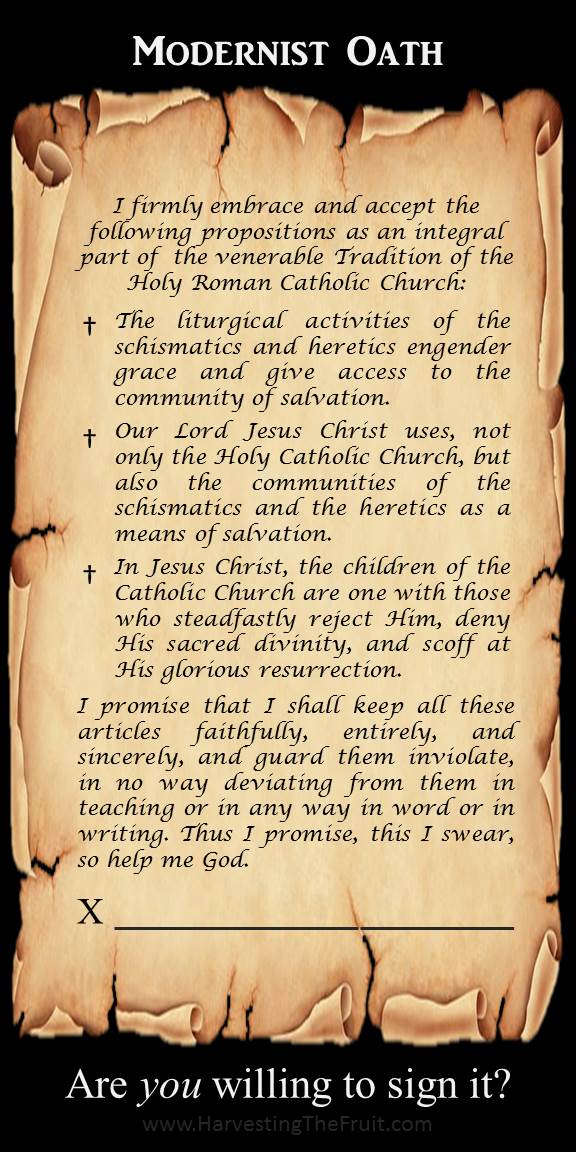 Even though most sincere Catholics of good will in our day, including a great many clergymen, are likely to think that this is just an exercise in mere speculation, it is nothing of the sort. This very demand has been made of traditional Catholics as a requirement for canonical regularity, or what is sometimes loosely called, “full communion.”  Most recently, it has been reported that the Franciscan Friars of the Immaculate may be required to sign just such a statement.

You see, each one of the three propositions above are set forth, albeit in language less precise, in the text of the Second Vatican Council (numbers one and two in Unitatis Redintegratio, Article 3; the third in Nostra Aetate, Article 4).

Knowing this, if you were asked to sign a statement  acknowledging that the content of Vatican II (which includes not only the propositions above, but also others equally disturbing) is an integral part of the Tradition of the Catholic Church, would you sign it?

Perhaps the better question is why would anyone in authority in the Church demand a pledge of fidelity to propositions that are so clearly offensive to Our Blessed Lord and the Holy Catholic faith? Is this the “diabolical disorientation” affecting the sacred hierarchy of which the Virgin Mary forewarned Fatima visionary Sr. Lucia?

These are not questions of importance for so-called “traditionalists” alone, but for everyone who calls themselves Catholic, and yet the majority, it seems, are unaware of the extent of the current crisis. With them in mind, I implore you to share this far and wide.

So, would you sign it? Answer below and feel free to explain your choice in the comment box.

Was the post-conciliar liturgical disaster inevitable?

Bishops: It’s time to turn in your man cards