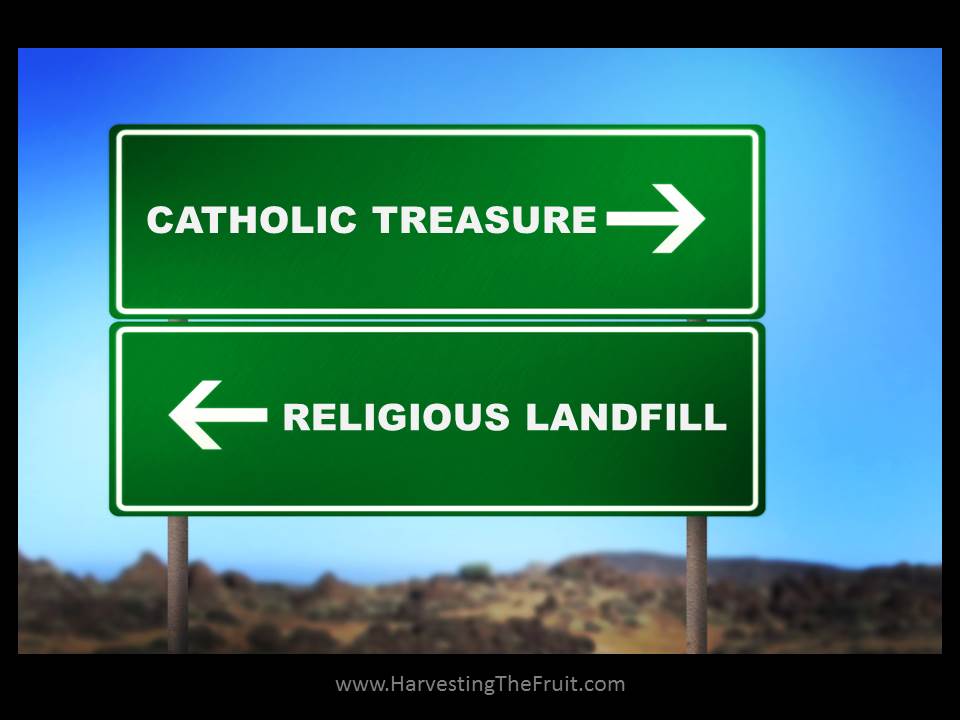 In keeping with the theme of recent posts, I offer for consideration yet another observation on the modus operandi of the “new evangelists.”

For reasons we will discuss later, the “new evangelists” have an unnerving fascination with the religious “insights” of non-Catholics, citing them as references in their homilies, articles and books, and quoting them freely as if to hold them up as experts worthy of the faithful’s admiration.

Previously, for example, we considered the American bishops’ penchant for quoting John Adams, a Founding Father of the United States who wrote that the Catholic Church is the “whore of Babylon” and a deceiver of people “simple and ignorant;” a man who also happens to enjoy a place of honor in that abominable “Patriotic Rosary” that the USCCB has been pleased to promote.

Returning to Fr. Barron and his Real Clear Religion piece, we already considered how he turned to the Orthodox schismatic Fyodor Dostoyevsky for the exclamation point to his entire essay. Unmentioned, however, was his earlier reference to the “great meditations” of “the Irish philosopher Iris Murdoch [who] strenuously insists that the authentic good legitimately imposes itself on the human will and is not a creation of that will.”

Not only was Murdoch a heretic, she also happens to have been, according to at least one biographer, an adulterer and a lesbian. So much for the imposing force of the authentic good.

Even Pope Benedict couldn’t help but scavenge the landfill of religious “wisdom” bequeathed to the world via the legacies of those who rejected the one true faith.

While the Lord continues to raise up examples of radical conversion, like Pavel Florensky, Etty Hillesum and Dorothy Day, he also constantly challenges those who have been raised in the faith to deeper conversion.

The first two examples of “radical conversion” that were allegedly “raised up” by the Lord Himself are a Russian Orthodox who (like Dostoyevsky) denied the authority vested in the Vicar of Christ, and a Jew who denied Our Lord Jesus Christ and therefore the God of Abraham, Isaac and Jacob who sent Him. Both of these shining examples of “radical conversion” died outside of the Catholic Church.

These are but a handful of many such examples, and they cause one to wonder why the “new evangelists” are keen to so anoint such individuals as Adams, Dostoyevsky, Florensky, et al.

Does not the Catholic Church have a nearly inexhaustible treasure trove of wisdom supplied by the Saints, Popes and Doctors of the Church from which to draw? Is not this storehouse of religious insight sufficiently rich in content that our churchmen need never hold up for esteem any heathen, heretic or Jew, lest the faithful mistake them as examples of faith worthy of emulation?

Let us speculate as to the reason why the “new evangelists” so often quote them just the same.

In the case of certain name-dropping homilists, one sometimes gets the sense that it’s a shallow attempt to impress their captive audience with evidence of just how well-read they are. At other times, one detects the undue influence of a suspect homiletic resource on an over-worked priest who did a little cut-and-paste.

Unfortunately, however, this doesn’t even come close to explaining this dreadful tendency among the real movers and shakers of the “New Evangelization,” like Fr. Barron and recent popes.

No, for them the problem runs much, much deeper.

You see, it is the very ethos of the “New Evangelization” to view the non-Catholic world, not so much as that which stands in need of conversion (i.e., through the lens of the Church’s mission as it was given by Jesus Christ), but as a marketplace for religious interaction wherein, according to Pope John Paul II, “dialogue is not simply an exchange of ideas; in some way it is always an exchange of gifts.” (Ut Unum Sint 28)

In light of this particular vision, we must admit that the “New Evangelization,” although the Apostles and Martyrs wouldn’t recognize it as particularly “evangelical,” is properly named inasmuch as it is indeed rather new.

How new? Once again, let us turn to Pope John Paul II, the man who coined the phrase “New Evangelization” in the first place:

Entrusting myself fully to the Spirit of truth, therefore, I am entering into the rich inheritance of the recent pontificates. This inheritance has struck deep roots in the awareness of the Church in an utterly new way, quite unknown previously, thanks to the Second Vatican Council, which John XXIII convened and opened and which was later successfully concluded and perseveringly put into effect by Paul VI, whose activity I was myself able to watch from close at hand. (The inaugural Encyclical of the Pontificate of John Paul II, Redemptor Hominis 3)

Yes, an awareness that is utterly new and quite unknown to the Catholic Church indeed!

We must understand that the impetus for what passes as “mission” according to the “new evangelist” isn’t the saving of souls; no, that was the case prior to Vatican II, back when our churchmen operated under the unshakable conviction that the Holy Catholic Church is the solitary community of salvation, she who alone is in possession of the fullness of Divine treasure.

In other words, pre-conciliar churchmen were moved to evangelize by the reality that the Church has been charged with bringing to the world something that it desperately needs; the very Redemption won by Christ, and ultimately, eternal life.

The “new evangelist” by contrast is moved to “evangelize” by a 180 degree inversion of reality; one that sees the non-Catholic world as having something to give to the Church, something that she desperately needs.

And what might the Catholic Church according to this impoverished ecclesiology stand to gain through “an exchange of gifts” with the non-Catholic world? Nothing less than life itself!

Thinking of the next Pope: He must be a man who, from the contemplation and adoration of Jesus Christ, helps the Church to go out to the existential peripheries, that helps her to be the fruitful mother, who gains life from the sweet and comforting joy of evangelizing. – Cardinal Bergoglio addressing the General Congregations prior to the papal conclave that elected him pope

All of this being the case, I suppose it’s little wonder that the “new evangelists” delight in bathing in an honorable light of men and women who have rejected Our Lord Jesus Christ and His Bride, the Church.

God help them, and God help us!

Of “Heavenly light” and Fanciful Tales